back to the British Library: Queens of the Abyss: Lost Stories From the Women of the Weird (ed.) Mike Ashley 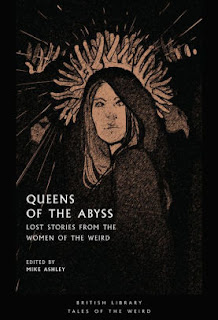 978012353915
British Library Publishing, 2020
350 pp
paperback
The often-unknown works of women from yesteryear who dabbled in the weird, the strange and the dark is one of my reading passions.  I've got several of these anthologies in my home library, along with several single-author collections from small, indie publishers.  I've been at this for a few years now, and it is, as I've said many a time, a true pleasure at finding stories that have not been anthologized on a regular basis.   In this installment of the British Library Tales of the Weird series editor Mike Ashley has done it -- not only are there stories I'd not previously read, but there are writers I've never heard of until now.  A win-win for me and for anyone who has the same sort of reading love.    Here the work of both familiar and,  more importantly to me, not-so-familiar women writers whom Mike Ashley dubs the "Queens of the Abyss"  graces the pages of this book.    His choices are, as he says in his introduction,  representative of women writers who

The first three, "A Revelation," by Mary E. Braddon, "The Sculptor's Angel" by Marie Corelli and Edith Nesbit's "From the Dead," are all ghostly tales, as is Marie Belloc Lowndes' "The Haunted Flat."  Between the last two comes Frances Hodgson Burnett's "The Christmas in the Fog" which has one of the best and most eerie visions of being caught in a thick fog I've ever encountered, but really, that's about all that impressed me there.  It's not until I got to Alicia Ramsey's "A Modern Circe" that this book picked up speed and I found myself completely engaged until turning the last page.  Ramsey's tale is truly weird, featuring a "handsome rogue" of a man who has the misfortune of encountering "The Mad Virgin of the Hills,"  because he and the entire Italian village know that "Those whom she calls never return."    May Sinclair, whose work I absolutely love, is next with "The Nature of the Evidence," also on the ghostly side but with one of the finest and most unexpected twists ever.  You don't have to read between the lines to figure out what happens here.  "The Bishop of Hell" by Marjorie Bowen follows with the story of a "ruined" woman and the truly evil, debauched man responsible for her downfall.  I love Bowen's stories and this one is just example why.

And then we come to my favorite section of this book, with a few stories written by, as Ashley notes,  "less well known" women writers who "dared enter the male stronghold of the pulp magazine and established their own reputation for the modern weird tale. " These topped my list of favorites.   Three strong examples can be found in Margaret St. Clair's "Island of the Hands"  (1952), Greye La Spina's "The Antimacassar" (1949),  and "White Lady," by Sophie Wenzel Ellis (1933)  St. Clair's story finds a man plagued not only with grief after his wife's death, but also with a recurring dream in which he sees her standing there, begging for him to come to her.  Her plane had crashed  "in perfect weather" even as he was speaking to her by radio, and while a search was mounted, no trace of her was ever found.  He knows logically that she's dead,  but the feeling is so strong that after three months of dreams and a decision to "abandon rationality," he decides he has to go look for her, and his search takes him to a strange island where everything is perhaps not what it seems.   "The Antimacassar" appeals to  the part of my reading self that appreciates a good mix of  mystery and pulp horror, as it is a blending of both.   When Cora Kent, Lucy Butterfield's "immediate superior,"  fails to return from her vacation, Lucy decides to use part of her own time off to try to find out what had happened to her.  With a little luck,  her search takes her to a farm owned by a Mrs. Renner, who denies ever knowing Cora.  Lucy believes otherwise, and decides to stay for a week to do a little "self-imposed detective work" when not learning weaving from Mrs. R.  She soon discovers that finding Cora Kent is probably the least of her problems at present.   "White Lady" just might be the strangest story in the entire book; certainly one of the most fun to read and definitely the most deliciously exotic.  Set on a remote island in the Caribbean, Brynhild is spending time with her fiancé André, a scientist who "experimented fantastically with tropical plant life."  As he shares with her his "supreme achievement," a flower he calls White Lady, she begins to believe that not only he has gone well beyond the point of obsession with this thing, but that this "bête blanche" is much more than a mere plant.

In "The Laughing Thing," by GG Pendarves, a sick man who is cheated out of money on a land deal vows to return after his death to make the other party pay.  He promises that it will be "a payment that will not reduce your bank account," which only makes his nemesis laugh.  As the saying goes, he who laughs last laughs best, but there is nothing funny at all in what happens next.  "Candlelight" by Lady Eleanor Smith finds five people together at a weekend party (two couples and an unmarried man) which is interrupted when they discover they're being watched by a gypsy girl.  For kicks, the hostess invites her to tell their fortunes, but the fun ends when the girl actually does.  Jessie Douglas Kerruish provides "The Wonderful Tune," which turns out not to be so wonderful after all once it's played.  I saw where this one was headed not to far into the story but it's still fun.  "The Unwanted" by Mary Elizabeth Counselman (of whom I am a huge fangirl)  is truly on the weird side as a census worker in the hills of Alabama encounters a poor farmer and his wife. All is well until she inquires about the number of children they have ...  Last but not at all least is Leonora Carrington's "The Seventh Horse" which may at first seem nonsensically bizarre, but there is method in her surrealistic madness.

Much reading happiness here; Queens of the Abyss is one of the best volumes of the series so far, and the British Library Tales of the Weird series overall is a definite no-miss for lovers of the truly strange.  My reader hat is tipped to editor Mike Ashley, who has been one of the best and most prolific finders and curators of these long-forgotten stories over a long career.    Definitely and highly recommended.