The King in the Golden Mask, by Marcel Schwob. I loved this book. Absolutely loved it. 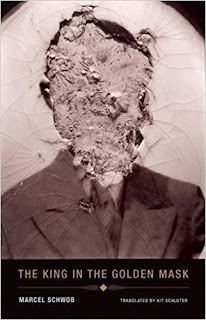 The other day I decided that I really ought to read this book since it's been just sitting on my shelves sort of being neglected.   I grabbed the hardcover edition (Carcanet New Press, 1982; Iain White, translator) that I've been holding on to forever, and then I picked up this edition from Wakefield to see if there were any differences between the two before I started reading.  I chose the Wakefield over the Carcanet because translator says here that


"Although Iain White has translated a brilliant volume of Schwob's selected stories under the title of The King in The Golden Mask -- first published by Carcanet Press and recently updated and reissued by Tartarus Press -- White's selection includes roughly half of the original 1892 collection of that title.  As such, the book in your hands marks the complete publication of Schwob's original King in the Golden Mask in English. "

Back went the Carcanet edition onto its shelf.  Why would I only want to read half a book?


The titular first story sets the tone and the main theme that carries through this collection of stories.  Before that begins, however, there's Schwob's own preface that will clue readers in to what they're about to experience:


"There are, in this book, masks and covered faces: a king masked in gold, a wild man in a fur muzzle, Italian highwaymen with plague-wracked faces, and French highwaymen with false faces, galley slaves under red helmets, little girls aged suddenly in a mirror, and a singular host of lepers, embalming women, eunuchs, murderers, demoniacs, and pirates, between which I pray the reader belive I take no preference, as I am certaint hey are not, in fact, so various. And in order to demonstrate this most clearly I have made no effort, throughout their masquerade, to yoke them together along the chain of their tales: for we find them linked by their similarity or dissimilarity."

and, perhaps more importantly for the purposes of this book:


"To an observer from another world, my embalming women and my pirates, my wild man and my king, would possess no variety."

Schwob goes on to say that this "observer from another world"  would have "the blinkered view of the artist and the generalization of the scientist," which would help to shape his perspective; this "superior observer" would say that "all in this world is but signs and signs of signs."   Masks, he would say, are "signs of faces."

In an interview at The Paris Review, Translator Kit Schluter says that Schwob's book is "all about the way identity is a mask over our 'true' selves,"  and in the book's "translator's afterword" section, goes on to explain that the mask functions


"both literally and figuratively by turns, to represent the impossibility of attaining truth, be it of identity or narrative, or even of belief"

and is presented here in different ways, both physical and


"in the way many of the stories' narrators doubt or are uncertain of, what what they see for example -- there is an ambient paranoia throughout that narrative, even the most neatly 'historical' is only a mask laid over the inaccessible truth of the event..."

Both the author's preface and the translator's afterword lend themselves quite nicely to a discussion of semiotics if anyone's interested.   In terms of this book, quoting Schluter once again, The King in the Golden Mask


"suggests time and again that one's true identity comes to light only in the crucible of a struggle so intense that it bares him of any privilege or nicety behind which he could otherwise hide."


Schwob is known to have combed through all manner of  literary, historical, and biographical works as source material.  While the author is well known for his disbelief in "originality," Mr. Schluter notes that he


"made fiction new by making it deeply diachronic, indebted to history..."


Rather than simply regurgitate though,  he uses the material to explore what it is that makes people human. In most of these stories, it seems that he uses the potential that exists in everyone to engage in some sort of violence or cruelty as a part of his definition.


There are twenty-one stories in this volume, each dedicated to a different friend, ranging from science fiction-ish to contes cruels to the out-and-out weird.  Honestly, I loved them all, and on the whole, the entire collection is just beautiful both in terms of writing and in what Schwob is able to bring out in each story.  I won't go into them but I will share a rather eye-opening experience about myself in reading "The Plague" that sort of sideways makes the point of the book.  Consider the seriousness of the spreading of the plague  in Medieval Europe for a moment, the fear that everyone had that they would become its next victim, and at the end of this particular story, I actually had to stop and reflect on my reaction at the end when I didn't know whether to laugh or to be horrified.  That's the sort of writer he is and when a story can make me go inward to try to examine myself, well, that's power.

You could read this book in one sitting, but don't. Take the time to go through it slowly and think about it.  If you're in it  looking only  for the horror/weird shockness (I know that's not a real word but it works here) you're reading it for the wrong reason. It's definitely there, but this book is a work of art between two covers, and those don't come along every day.  Highly, highly recommended for the thinking reader,  and for people who appreciate the beauty found in the written word.  You'll certainly find it here.