a little late for Halloween, but read it anyway: The Valancourt Book of Horror Stories, Volume Three, by James D. Jenkins and Ryan Cagle (eds.) 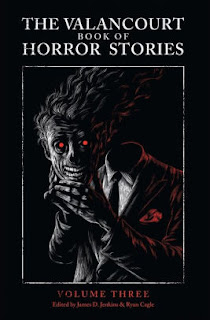 
I actually meant to make this post around Halloween when I read this book,  but life's been seriously hectic here at home so I'm a bit late.  It doesn't matter though, since this third volume of The Valancourt Book of Horror Stories can really be read and enjoyed at any time.

There is not a single misstep in this entire collection, something I can't always say about most horror anthologies I read.  Normally I find at least one story that just doesn't work; that is just not the case here. Here's something else that's great about this book: the arrangement of the stories is excellent.  It starts off with R. Chetwynd-Hayes' somewhat humorous  "Don't Go Up Them Stairs" and concludes with Robert Westall's   "Beelzebub" (also somewhat laughworthy), almost as if the editors thought they'd put their readers through enough horror in between.  I don't know about anyone else, but I tend to carry tension while reading horror, so beginning and ending with touches of humor here is perfect.

While each and every story in this book is top notch, I did have a few personal favorites, with  "Mr. Evening" by James Purdy at the top of the list.   It is probably the most atypical horror story in the book, but in my case, it did its job.  The chills grow slowly in this one,  increasing in increments until the end where I had a sort an overall  bird's-eye view of what was happening here, and then I actually had to put the book down for a while to recover as the actual horror of it all left its impact. When I come across a story like this one where the implications are truly frightening, sometimes they scare me much more than the ones where all is explained.    Forrest Reid's "Courage" offers a new dimension to the standard haunted house story, as does Helen Mathers' "The Face in the Mirror," which also hits every one of my Victorian ghost story buttons.  "Mothering Sunday" is another great tale by one of my favorite writers of horror and the strange,  John Keir Cross, whose "Glass Eye" remains one of the creepiest stories I've ever read.  Steve Rasnic Tem's "The Parts Man" while horrific, is also surprisingly poignant, in which a man strikes a strange deal, with high costs to pay.    I'll also add Elizabeth Jenkins' "On No Account, My Love" to this list, although I have read it before. It's another one where only in the final moments do you realize the nature of the implications of this story, at which point the chill runs up the spine. And finally, there's  "Blood of the Kapu Tiki" by Eric C. Higgs,, which has a great, old-fashioned pulpy horror feel to it that I absolutely couldn't resist.

And speaking of "Blood of the Kapu Tiki,"  I also had to buy the paperback tiki cover edition of this book.

I'm beyond happy that James and Ryan have continued the tradition they started with the first book in this series, compiling amazing horror stories written by the authors whose work they publish. As I've said all along, they have an uncanny feel for knowing not only what's good, but also unique; I appreciate  both of them for having such great taste.  The same applies to Valancourt's publications in general; as I've also said all along, they somehow manage publish exactly what I want to read.  And as for this book in particular,  to be honest, at this point it just wouldn't be Halloween without a volume of Valancourt horror stories in my hands.