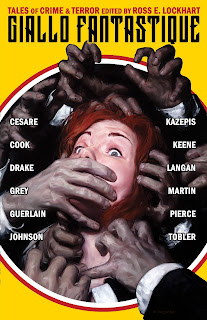 Now here's something you don't run across every day: a book filled with stories blending giallo and the fantastique, as interpreted by the twelve authors contributing to this volume.  In his introduction Ross Lockhart says that what we're about to read is


"a paranoiac descent into a dark world of literary Grand Guignol like no other ... on the one hand grim and fantastic, on the other pure (if grotesque) cinematic fun"

and he isn't joking.  Fun, for sure; grotesque, definitely; and grim is an understatement.

Rather than just doing my usual, I'll focus on my favorite three stories here, in order of appearance.

Lockhart made a wise move in using Michael Kazepis' "Minerva" as the gateway to the rest of this collection; as I've often noted, for me the first story should whet the reader's appetite for what's to come,  and it most certainly did that.   While I could feel giallo happening here,  this story is also incredibly weird, as in good weird, as in brain-boggling weird.  It centers around a young woman who comes to Greece after the death of her estranged brother.   She starts out with the idea of making "an attempt to know something about him as the man he'd become," and gets way more exposure to him than she'd bargained for. I love the out-of-the-box, strange way this writer thinks, most especially during a scene in a most bizarre theater.   Like the main character  who says at one point "I never want this to end," -- well, neither did I.    Anya Martin's "Sensoria" also gets my vote in the category of great, mixing music, the artist's inner gaze, and the psychedelic/psychotropic to create a story I can only describe as surreal.   I may have just discovered what it might be like to enter into someone else's hallucination.    Nods to giallo in this one, but to me it moves much more along the fantastique line; it's a story you live rather than simply read.     "Sensoria" is one of the most truly original stories ever;  the ending on this one will send you right back to its beginning to read it again.  And then maybe a third time.   And even then you'll still be thinking about it.  And finally, we have Orrin Grey's  "The Red Church."   Sick of writing "fluff pieces," when Yvonne is assigned to interview eccentric artist Wade Gorman, "a brilliant underground artist" who hasn't produced anything in the last six years, she's excited.  Hoping for an "exclusive" on possibly new projects, she makes her way to Gorman's studio.  Let's just say the experience will change her forever.  I made the  mistake of reading this one just before I turned off the book light and closed my eyes; I kept seeing it play out in my head, unable to turn off the completely unnerving feelings it caused.  What these three stories have in common goes far, far beyond the thematic elements of this book; these are some of the most literary, most well-written  pieces of horror that I've encountered in some time.  If more of today's horror writers would learn to write like these three people, I might be tempted to read more contemporary work.    Outside of these three, I have to give major applause to Garrett Cook for his "Hello Handsome," a not-for-the-squeamish murder tale which is told from a different, most unsettling, and original perspective. 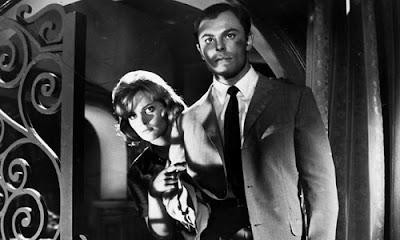 Bava's "The Girl Who Knew Too Much" from Kultguy's Keep


Pointing out these stories specifically as personal favorites doesn't mean I didn't like the other ones, because there is some really good, quality writing going on here.  Quite honestly, the only one that I really didn't care for was the last story written by Brian Keene, "Exit Strategies. "  Here we find a serial killer on a mission, but for me it read like the author just wanted to throw in a bunch of killings, violence, and gore for scare effect.   Yes, there's a bit of plot, but it's nowhere near as nicely composed as the more literary offerings in this book, and I'm still kind of wondering how it fits with the rest of the stories here.

The other authors in this book are Adam Cesare, Nikki Guerlain, MP Johnson, Cameron Pierce, Ennis Drake, E Catherine Tobler, and John Langan, most of whom are new to me and all of whom bring a unique take on that space where, as the editor reveals, "crime and supernatural horrors" intersect.     You can find the full table of contents here at SF Signal.   This one I'd certainly recommend.