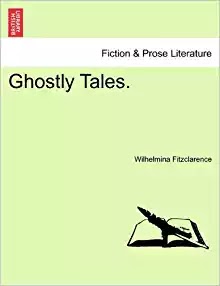 I'm very grateful to whomever it is at the British Library that makes decisions on which of these old, rather obscure books to reprint and make available to the reading public; what I paid for this book pales in comparison to the selling price of the original, which you can pick up for a mere $1,750 at L.W. Currey, where, incidentally, the photo below came from.  The British Library covers may be dull and unimaginative, but hey ... I don't know about anyone else, but if I had $1,750 to casually spend, it wouldn't be for a single book.

Looking closely at this picture of the original, note that it gives authorship as the Countess of Munster.  According to her page at Author Information of the Victorian Circulating Library, Wilhelmina FitzClarence, Countess of Munster, was born in 1830 in Scotland.  Her mother, Lady Augusta FitzClarence, was the "illegitimate daughter of William IV," and was "a great favorite of the king."  In 1855 she married the second Earl of Munster (her cousin), and went on to have nine children.  She wrote two novels; this book appeared when she was 66.  Much more about her life is recalled here.   The Countess of Munster's stories were allowed to drift into obscurity; it's only been somewhat recently that her work has been rediscovered and anthologized, and now this book is also available in e-reader format and online.

There are eleven stories to be found here, along with original illustrations. And while overall I'm very happy to have found this book and to have it in my library,  let's just say it doesn't fall into the category of ghost-story favorites.

Ghostly Tales opens with "A Double," about which the author says the names are "fictitious," but everything else is true.  Here, a woman and her daughter Ella are expecting a visitor who is most eager to speak to Ella about her two-year stay in America.  At the time she is expected to receive their guest, a Mrs. Jacks, Ella is supposed to be in London for an appointment. Promising to come back as soon as possible, off she goes, and gets the surprise of a lifetime.  In the next story, "The Ghost of My Dead Friend," also purported to be true, a friendship of "intense affection" carries over "beyond the grave." Then we start getting into more meaty stuff with three ghost stories in a row beginning with "The Tyburn Ghost," in which summertime visitors to London find lodging in a house near Marble Arch, Hyde Park at No. 5 Dash Street. After a dinner of pickled salmon and Welsh rarebit, Mrs. Dale awakens in terror proclaiming that she's just had an encounter with a "horrid putrid-looking face."  Daughter Minny shrugs it off as a case of  mom being "over-tired and nervous," until it happens again -- to her.   Next up is "The Bruges Ghost," which has a most shivery sort of ending but to tell would be to spoil, and at the end of this series of three ghostly tales is "The Page-Boy's Ghost," which plays out in a house in Granville Crescent.  Any of the latter three would be great in an anthology of haunted house stories, and spooky enough for inclusion in any ghost story collection.

The next story, "Aunt Jean's Story" is very different from what came before, in the sense that it takes on more of a religious tone rather than providing ghostly chills.  It recounts the adventures of a young girl who grows up unwanted and neglected in Auld-Castle in Scotland, her other siblings having all left home as soon as possible and who "never troubled their parents with their presence, unless obliged." She falls in love, but her parents have other plans for her, resulting in tragedy.  The story itself is okay, a bit of an adventure,  but I'm not too keen on the religious aspects that are clearly spelled out here.  "Only a Cat" I didn't even really see a purpose for.  "The Leather Box" makes for great sensation fiction with a touch of exotic flair and lots of weirdness, but definitely NOT ghostly fare.  Considering that this is the longest story in this collection, I find that a bit odd.  Moving on, "Saved" is also a fun tale, gothic in tone, complete with a strange Russian countess who is stepmother to a young and sickly prince, which is followed by a story in which madness, a lunatic asylum and a strange lodge in the forest all combine to make up "A Mauvais Quart d'Heure," in which a young woman finds herself making the decision of a lifetime, one that leaves her haunted for some time afterwards. Finally we come to the end with "A Mysterious Visitor," and I'm saying nothing.

All in all, the actual "ghostly tales" are few, which leads me to wonder exactly why Wilhelmina Fitzclarence settled on the title of her collection, which is misleading at best.  It is a very mixed bag of stories, to be sure.  The joy for me isn't so much the book as a whole, but rather the discovery of yet another obscure Victorian author of strange tales.   Anyone considering this book based on this title may be a bit disappointed, but it has some great moments to be savored.
Posted by NancyO at 12:05 PM