one of my favorite Gothic novels of all time: Uncle Silas, by J.S. Le Fanu 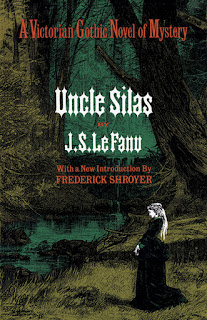 
"Fly the fangs of Belisarius!"

There are certain books in my library with which I've fallen in love -- the books I've been dragging around with me from move to move that I would never let out of my sight, and this one is pretty much in the top tier of those.  I decided to reread it a few weeks ago when someone online was asking about a Victorian mystery and this one popped into my head.  Well, there's that, plus the fact that many months ago, I'd bought a dvd of the old BBC adaptation of Uncle Silas called "The Dark Angel"  and really wanted to watch it, but I wanted to wait until I'd reread the book.  I have two different editions:  Penguin  ( ISBN 9780140437461)  and this one from Dover, but I had just finished a Dover reprint of another book from 1827 and decided to continue the Dover run.

Since I'd already read this novel, I didn't skip the intro this time, and there was a particular paragraph that caught my eye, so much so that I'm putting it in bold print here:


"Well, you now have Uncle Silas in your hands. If you've not read it before, I envy you. You are about to have a first-time reading experience which, I suspect, you will never forget."

This post is a huge departure from my norm, since I won't give up a single detail here, nor will I provide even the slightest hints, because first-time readers should stay away from anything about Uncle Silas  that will reveal its contents  either before or during your reading of this novel. Do so at your own peril: knowing what happens ahead of time will completely lessen the impact that the book will have on you and the fun is in the building of suspense and in getting caught up in its atmosphere as it gets darker and darker and darker,  until in its final moments when you can finally let out all of the tension you've been holding inside.  If you're not knotted with tension as you read this book, there is seriously something wrong with you. Seriously.

It is and will remain one of my favorite books ever, and I can absolutely recommend it. Unlike my usual practice, I won't go into what lies underneath its surface, but just so you know, there is a LOT happening that careful readers will be able to discern. Honestly, it's killing me to keep quiet about it, but as I said, not a word.   Just a couple of things: 1) do not gloss over the role of the Swedenborgian religion here -- it's very, very important, and 2) don't skim through either the descriptions of the landscape or the main houses in this story -- Le Fanu is an absolute master of weaving such details into his work and they only serve to augment what he's trying to do.  Other than that, my only advice is to let the book carry you away from the real world and to have tons of fun with it.

Now - let's talk adaptations for a moment, neither of which should be viewed until you've finished the book.   As I noted earlier, I recently bought a screen adaptation of this novel called "The Dark Angel," 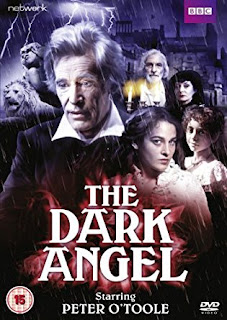 which stars Peter O'Toole as Uncle Silas, and he's pretty damn creepy in his role. This adaptation tends to overdo it with the more nightmarish/surrealistic effects which were probably great at the time (1988)  but which now seem kind of silly and tend to lessen the suspense a bit here and there, but at least it adheres to the novel quite nicely with only a few changes here and there.  The second adaptation (1947)  is called "Uncle Silas,"  which quite frustratingly changes the story almost completely.  However, what both adaptations do well is choosing the right person to play the role of my favorite, most horrific character in this book --  Maud's governess Madame de la Rougierre.   While the actress does a great job in the 1947 version,  Jane Lapotaire does an even more freakish portrayal than her counterpart in the earlier film.


Honestly, I didn't think that could be possible.

Both have their merits, but my money's on "The Dark Angel."