The Green Face, by Gustav Meyrink 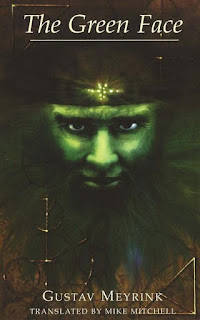 This is one trippy book, and that's putting it mildly.  It is certainly classic Meyrink, though, and anyone who's read his The Golem would have to agree that the two books were definitely the work of the same person.  Once again turning to legend as a basis for his book, this time Meyrink uses the story of the Wandering Jew, and as in The Golem, he also incorporates several different sorts of esoteric and occult elements within the text.

Fortunatus Hauberrisser finds himself in Amsterdam.  Meyrink's Amsterdam is now "flooded with people of all nations," since the war was now over and people are there either hoping for "permanent refuge in the Netherlands," or they've made it a stopover while they consider where to go next.  Hauberriser finds himself going into a shop called Chidher Green's Hall of Riddles.  While waiting for the assistant to finish her phone call, he falls into "a deep sleep," after which he awakens and is spoken to by the old Jewish man who owns the shop. The old man had a face "like nothing he had ever seen before," with "eyes like dark chasms," and skin "a greenish olive colour." The face continues to haunt him long after he leaves the shop -- and  Hauberisser doesn't know it, but his sighting of this face will launch Hauberriser on a quest, not just to find the old man again as he wanders through Amsterdam, but also for the truth.  And, since it's Meyrink writing here, we know that his search will involve initiating Hauberriser and the other characters that he encounters into the journey to a higher plane of existence and spiritual knowledge.  However, there are major obstacles that Hauberriser and his fellow seekers will have to overcome before they can achieve their goals, none the least of which  is a Zulu bent on murder and destruction. 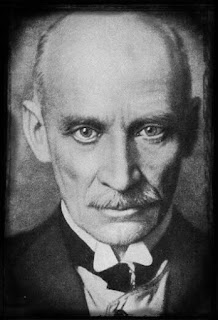 I'm sorry to keep comparing this book to The Golem, but it's really hard not to.  In both, elements of alchemy, Kabbalah, Buddhism, mysticism, and other esoteric beliefs find their way onto the pages; secret knowledge is given and the recurring idea is the way to transcendence of the physical self, and indeed of the physical world, while keeping one foot in both.  Here, though, a new element creeps into the story, a dark ending that is clearly a reflection of the anxieties of the time -- I mean, it is 1916; World War I is still going -- and the end, which many readers have noted as "apocalyptic" ... but I think I'll leave it there for now.

Meyrink's commentary on civilization is excellent here -- there's a scene that takes place in a "mixture of music-hall and restaurant" on Amsterdam's Nes that has Hauberriser shaking his head once the audience changes to "the same cosmopolitan would-be society" who have come to watch the most bizarre show.  Hauberisser is dumbfounded at what he witnesses both on stage and in the audience, noting that


"...a mask had been cast aside that had never concealed anything but intentional or unintentional hypocrisy, lack of vitality positing as virtue or ascetic monstrosities conceived in the mind of a monk!"

He goes on to say that "a diseased organism" had been "taken for culture; now it had collapsed, laying bare the decay within."  And also, as one might expect at this time in history, Meyrink  tackles nationalism, demagoguery, and racism (although strangely, he does use a racial slur more than once to describe the Zulu so you've been warned).

Frankly, The Green Face isn't quite as good as The Golem, but I'd certainly rate it much higher than his The Angel at the West Window.  It's another novel that is NFE (not for everyone), but it's one I certainly recommend to anyone who is already of fan of Meyrink who may not have read this book yet.  It's another out-of-the-box read for people who enjoy pondering what they've just read, tailor made for someone like me.


***
for an awesome perspective on this novel, check out this blog post at Zen Throwdown.