The Soul-Drinker and Other Decadent Fantasies, by Jean Lorrain 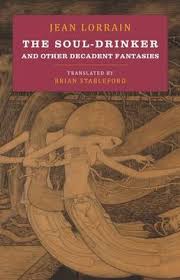 First and foremost, a big thank you and virtual hug to Anna at Snuggly books, who 1) gave me something to look forward to when she first told me that this was book was going to be published and 2) sent me a copy.

It's not often that I read a story that begins with a queen giving birth to a frog, but that definitely happened here in the final story, "The Mandrake."   I shouldn't have been surprised -- the one before that, "The Princess Under Glass," had a young girl stuck between life and death  floating downriver on a barge, and the one prior to that one, "The Marquise de Spôlete" (a personal favorite in this collection), takes on a rather twisted and (I'm pleased to say)  messed-up version of one of Lorrain's favorite subjects, Salome and the head of John the Baptist. And it gets better.  I know this will sound kind of dumb, but reading this book is the mental equivalent of walking through a museum of curiosities where you don't know what's going to be coming at you around the next corner but you do know that whatever it is, it's going to be good. And I mean really good. Really, really good.   Another thing: anyone familiar with Lorrain's novel Monsieur de Phocas is going to see a number of echoes between the two books, for example, the man who can only truly love the dying, masks, "the gaze," exile/displacement, hypocrisy, narcissism -- the list goes on.

As Brian Stableford, the editor and translator of this collection notes re the overlap/fusion of Naturalism and Symbolism in "examining the psychological roots of amorous attraction, and particularly its apparent paradoxes, perversities and abnormalities..."


"No other writer of the fin-de-siècle undertook a more elaborate exploration of those apparent paradoxes, perversities and abnormalities than Jean Lorrain, and no one else went as far afield in the search for discoveries of that curious kind than he did."

I haven't read too much in the realm of  fin-de-siècle literature, but after reading a novel and these short stories by Jean Lorrain, I think I trust Stableford's judgment.   While I'm not going to talk about individual stories here because it is such a treat to have discovered them on my own, I will say is that for me,  there's not a bad one in the bunch and each one is a separate little work of art on its own.  Another thing a reader might notice is that there is a clear divide in this volume.  While all as a whole reflect Lorrain's fascination with "strange and wayward amour,"  the "Naturalistic stories":  "Sonyeuse," "The Unknown Woman," "The Lover of Consumptives, "The Soul-Drinker" and "Ophelius" have a more contemporary feel; after that, there are the more supernatural tales, "contes" some of which are labeled as "Bohemian tales."  To put the last eight in some sort of contemporary perspective,  it's sort of like reading Angela Carter's excellent The Bloody Chamber - the subject matter is different, but the characters are there to be examined, their depths to be plumbed.

While personally I think everyone should read this book, it's really going to appeal more to readers of dark, strange fiction who don't mind sitting and mulling things over after reading each story.  It is definitely a thinking person's book and one to read ever so slowly so you don't miss a single word, a single nuance.  I love this author and I especially love this collection of strange yet compelling tales.