from the vault: Burn Witch Burn, by Abraham Merritt

The old horror classic "Burn, Witch, Burn" was recently released on blu-ray, so I figured that I'd read the book before watching the film.  Zee joke, eet was on me -- I started watching it and maybe five minutes in started wondering why the first scene was filled with people playing bridge at a home in England somewhere. So I look at the DVD cover and discover to my horror that the movie was actually based on Fritz Leiber's Conjure Wife, and not on the book by Abraham Merritt.  There's nothing like feeling like a dunce for not doing my homework.  So expect to see a post about Conjure Wife here shortly, since I couldn't settle down until I'd bought a copy.

Merritt's Burn Witch Burn does have a similarity to the movie that stole its title (except for the addition of commas) -- at the heart of the matter is a man who is forced to reassess his beliefs in the certainties of science when he runs head first into the supernatural. We first meet Doctor Lowell, "a medical man specializing in neurology and diseases of the brain," when he is called on by a "notorious underworld chieftain" Julian Ricori, "one of the finished products of the Prohibition Law."  One of Ricori's crew is stricken with some very bizarre ailment, manifesting itself with strange symptoms:


"The man's eyes were wide open. He was neither dead nor unconscious. But upon his face was the most extraordinary expression of terror I had ever seen in a long experience with sane, insane and borderland cases."

The man, seemingly paralyzed, eventually dies, but not before letting loose a maniacal laugh.  On examination, the doctor finds nothing that could have killed him, but the case is so odd that he immediately reaches out to other doctors to see if any of their patients have manifested the same symptoms.  When answers start coming in, Lowell is startled to see that a number of people have been in the same boat. After compiling a list of these patients, he (along with Ricori)  starts his quest to track down the source of this horrific illness hoping to find even one factor they all had in common.  Just as they're starting to make some progress the illness strikes again, this time hitting very close to home. 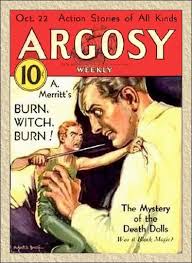 I won't divulge the meat of the story here, but let me just say that what happens in this book makes the Twilight Zone's Talky Tina  look like a rank amateur.  There's a lot of creepy stuff going on here -- looking at it from today's perspective, it's mild, even tame, but my guess is it had readers squirming in their armchairs back in the 1930s.  It's a strange blending of mystery, pulp, and horror, and while I didn't care too much for it at first, as things progressed, I ended with up with an odd sort of appreciation for this book.  First of all, looking past the silly horror parts, there are two main themes that develop out of this novel. One is the question of what it is that constitutes a human's soul; the second, as I've mentioned earlier, is what happens when science butts up against the supernatural.  As Dr. Lowell notes,


"To admit that what had occurred was witchcraft, sorcery, supernatural -- was to surrender to superstition. Nothing can be supernatural. If anything exists, it must exist in obedience to natural laws.  Material bodies must obey material laws.  We may not know those laws -- but they exist nevertheless."

Second, since there are a number of mysteries that need to be solved here,  the novel appeals to the part of me that loves these old books and just can't get enough. 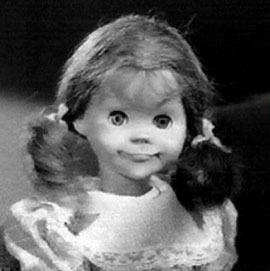 But speaking of mysteries, we're left with one huge hole, and that is the motivation behind the work of the character Madame Mandilip (a name that cracks me up because she's described as having a visible mustache).  We get a smidgen of her history, but we never fully quite understand why she does what she does here, and that's annoying.  Seriously annoying.

Merritt is much better known for his "lost-race" novels and short stories which are just plain awful; at the same time one of my biggest guilty pleasures in life is my love for really crappy, really old pulp.  Burn WitchBurn is much better than some of  Merritt's other work so if you're at all interested, you might want to give it a try.  I'd say try not to judge it by modern standards if at all possible; just sit back, relax and try to enjoy.
Posted by NancyO at 6:17 AM