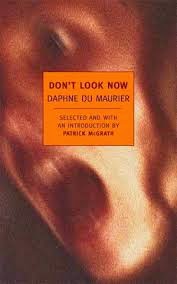 
"I have a theory that each man's life is like a pack of cards, and those we meet and sometimes love are shuffled with us. We find ourselves in the same suit, held by the hand of Fate. The game is played, we are discarded, and pass on."  (309)

In his introduction, Patrick McGrath notes that although Daphne Du Maurier's work has had great popular success,  "during her lifetime she received comparatively little critical esteem."  Du Maurier herself was "pained deeply" about being "dismissed with a sneer as a bestseller" rather than as a serious writer. If her popularity, her status as a "bestseller," or her reputation as a Romance novelist keeps people from reading her work in this collection, well, that's a shame.  If you're  tired of same old same old in your reading life, and you want a bit of shaking up, I can't think of a better book to recommend than this one,  a fine selection of stories that should not go unread. The choice of stories in this book might be a little uneven, but for the most part, they're worth every second of time you spend not only reading them, but thinking about them long after you've turned that last page.  This book might also provide a different perspective from which to examine Du Maurier as much more than simply the woman who wrote Rebecca.

As a whole, this is a fascinating collection of stories.  Thematically you'll find the author covers a wide range:   isolation, love, loss, grief, dislocation, revenge, obsession, fate  -- all very human attributes that here take on a different sort of significance in the lives of her characters. The beauty in these tales is that her people are just going about their every day lives -- at least at first.  For example,  In "Don't Look Now,"  a husband and wife are in Venice on holiday to help them to deal with their grief over their dead child.  In "Split Second," a widow with a young daughter away at school steps out to take a walk and returns home.  "The Blue Lenses" is expressed from the point of view of a woman who is recovering from eye surgery.  All of these things are very normal, very mundane, and described very well by the author.  But soon it begins to dawn on you that something is just off -- that things are moving ever so slightly away from ordinary, heading into the realm of extraordinary. By that time, you're so caught up in the lives of these people that you have to see them through to the end.    The joke is on the reader, though -- in some cases the endings do not necessarily resolve things, but instead, point toward another possible chapter in the characters' futures. While the author doesn't do this in every story, when she does, it's highly effective and leaves you very unsettled and in my case,  filled with a sense of unease thinking about what's going to happen to these people next. As one character notes, "Nothing's been the same since. Nor ever will be," and that's the feeling I walked away with in several of these stories.


While I enjoyed each and every story (and I'm not going to go through them all here -- they're best experienced rather than read about) there are some that I felt are much better than others.  I was frankly floored by "The Birds," mainly due to the dawning realization on the part of Nat Hocken about the reality of his family's situation -- and that of England and quite possibly the rest of the world as well.  This was for me, the most frightening story in the book, one that made me put the book down for a while before returning to it.  And if you don't want to read the story because you've seen the Hitchcock movie, trust me -- there is very little similarity between the two. The title story, "Don't Look Now," is equally as chilling but in an entirely different way - I had, however, read it previously and I'd seen the movie, which sort of killed it as a reread.  The movie sticks very closely to the story, so do yourself a favor, and read it first.  You'll be happy you did. "Blue Lenses" is another excellent entry in this collection, about a woman whose bandages are removed after eye surgery where she's fitted with temporary blue lenses. It's only after the bandages are off that she makes a horrifying discovery -- and then she has to go home. The ending of this one actually made me shiver.   Then, in a strange turn of events, another one of my favorite stories, "Monte Verità," starts at the end of the story.   "Monte Verità" is longer in length than the others here, but that actually works in its favor. This one is just eerie -- otherworldly is also an adjective I'd use to describe it.   The rest of the collection is good as well, but to me, these were the standouts -- the ones that messed with my head (in a good way) the most.

There are a number of good reviews of this book that go more in depth than what I've written here, but  don't read them until after you've finished reading the book. I didn't read any of them until just now, after having finished writing my own thoughts down, and I noticed that there are also some that tend to give away the show. Also, you'd be doing yourself a big favor if you save the intro for last.  This is a little gem of a collection that I'll be holding onto forever.  NYRB classics has really done readers a great service by bringing these stories together -- my advice: if you're interested in trying out  Du Maurier's short stories, this edition would be the perfect starting place.  It's good any time of year, but it does make for  great pre-Halloween reading.
Posted by NancyO at 2:01 PM