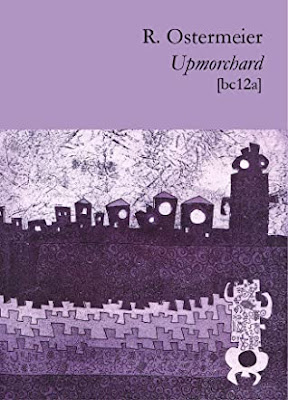 9781999629854
Broodcomb Press, 2021
83 pp
hardcover
(#62/100)
"...and the devil will appear."
There was absolutely no question about reading this book once I'd finished A Trick of the Shadow -- at this point now I'd read anything written by R. Ostermeier because that first book was so damn good. Upmorchard, while much shorter, has much more of an intense nightmarish quality to it that continued to haunt me long after it was all over.
As this story opens, Watts Barlik, who goes by Barley, is taking some time off before moving on to his first research post, doing a walking tour of the coast of the Peninsula.  He's not one for a set itinerary; as we learn about Barley,

"Folk ritual, crow roads and the quiet little places where there is more to be heard than the sea were always going to lead him astray."

After a week he's stopped at a B&B next to train station, and the old steam engine currently sitting on the tracks catches his attention.  With the intention of taking "an evening ride up the coast" he boards the train, which the only other passenger tells him is heading for Linnett. He also learns about a dig on a "spit island" called Gloy Ness, from which a number of artifacts ("the Gloy stones") were removed because of the island's geographical impermanence.  Barley finds a room in Linnett, and then decides to travel the roughly three miles to Upmorchard, "a tiny fishing cove with a natural harbour" where the stones are now housed.  It isn't long until he is invited to view the stones and he meets two academic researchers who are focused on trying to decipher the strange symbols on these "gargantuan stones." As Barley looks at the stones, he is positive that together they made up "an enormous text," which Arthur, one of the researchers, has already figured out.  He also claims to have translated some of the text, and Barley is curious as to how, since neither Arthur nor his colleague Delia have neither a key nor any kind of  Rosetta stone as a guide.  His curiousity and his need to know get the better of him, until he too falls under the stones' spell.   To say more would be absolutely criminal, but I will say that what Barley encounters while trying to solve this textual mystery is well beyond disturbing, moving into the zone of abject horror.

Upmorchard, as the dustjacket blurb notes, "returns to the peninsula's history," with Watts Barlik's story, but it also captures an even more sinister and horrific history that goes back to antiquity.  It may be short in length but do not let that fool you.  It is a gifted, talented writer who can do so much in such a short space and Ostermeier is a master.    Not only is this story atmospheric from the beginning, the sense of place is so well established that it's as if you're right there along with these people, smelling the sea breeze on a dark night.    Suspense and tension grow slowly before the story turns so dark that I had to put this book down more than once to regroup mentally before picking it up again.  Like much of my favorite weird fiction, there are no ready-made answers here; like much of my favorite weird fiction, the story played out over and over again in my head long after the last page was turned.

While Upmorchard is definitely not meant for the faint of heart or for those readers who must have everything spelled out, it is a book I can more than recommend to other lovers of the strange.  Sadly, I don't see any more of R. Ostermeier's work listed at Broodcomb, but hopefully this author will return with more at some point.