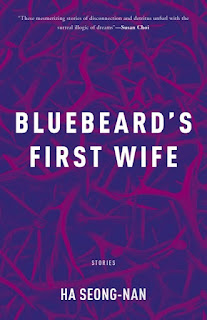 9781948830171
Open Letter Books, 2020
(originally published 2002)
translated by Janet Hong
229 pp
paperback
On the back cover there is a blurb from writer Brian Evenson who notes that Ha Seong-Nan  is "A master of the strange story," and as I discovered while reading this book,  he is not exaggerating.  It's also not an exaggeration to say that Bluebeard's First Wife is one of those rare books that can take me out of the here and now so thoroughly --it is a collection of stories  which often start out offering a picture of normal, every day life before slowly taking that turn that moves the reader to a point where it becomes obvious that not only has something gone very, very wrong, but also by then that it's too late. Each and every story in this collection took me by surprise and left me feeling completely off-kilter and disoriented, and I found myself  having to give my head a shake or two while reading to let go of the feeling of uneasiness each story provided.
I loved them all but I won't be divulging story contents here, with the exception of  "The Star-Shaped Stain," which as an appetite-whetter opening tale serves as a signpost as to the strangeness found in this book.  It begins as a mother sifts through photos of her child in a pile on the floor trying to find the best one.  Each of the pictures doesn't fully capture her face, and as she notes, she herself is having trouble remembering her daughter's face.  Immediately the reader wonders why, but mom goes on to pick out a photo from last year.  It is framed, put in the mom's bag, and along with several other people, mom and her husband make their way to the site of the camp for a memorial service where their children died in a fire a year earlier.  A stop along the way throws all into chaos, as a shopkeeper reveals that there may have been one survivor, as he'd seen a "wee littlle thing in yellow" walking by "crying all by itself,"  just before the fire broke out;  he'd also noticed that on the shirt was a star-shaped pin.   The true horror here though is yet to come.    One goodreads reviewer  noted that this story was based "around a fictionalised version of a real-life incident ... in 1999 when a fire broke out at a summer camp at the Sealand Youth Training Centre," (you can read about it here)  which made me wonder if perhaps Ha had used any other true events in her work.  I found one in "Flies" (which in my mind is tied for most disturbing and unsettling story in this book along with "On That Green, Green Grass").  I discovered via translator Janet Hong's Twitter  feed of June of last year that with "Flies," Ha wrote this story, "imagining the circumstances leading up to Korea's deadliest mass murder to date."  Toward the beginning of this dark tale one particular image stood out enough that I knew that this was going to be horrific: twelve fish put out to dry hanging on a clothesline and teeming with maggots.    Added to the ranks of most disturbing is  "A Quiet Night," and the eerie, excellent  "Daisy Fleabane" which finishes the book.
A large part of Bluebeard's Wife is concerned with the constraints on women or the expectations placed on them by family and society; sins, secrets, deception, despair and guilt are found throughout. There is a definite feel of detachment in the telling of these "paranoia-inducing, heart quickening stories," and there is also the sense all along that  something is just not right, making for unsettling reading.  There are no easy conclusions or resolutions to be found, leaving the reader with the feeling that what happens is inevitable, or that things are just how they are, which may just be the most frightening element of all.   Susan Choi's front-cover blurb says that these stories "unfurl with the surreal illogic of dreams," and that is really everything you need to know in a nutshell.  My kind of book, most certainly.
I loved this book.  Absolutely.
*****
I ran across an interesting take on Bluebeard's First Wife at Ploughshares , in which Marta Balcewicz examines this book through the lens of the fairy tale, given the book's title.   As she says about these stories,

"This is a place where at your most vulnerable, you will encounter no fairy godmother, no knight will rush in on a horse."