A Maze for the Minotaur and Other Strange Stories, by Reggie Oliver 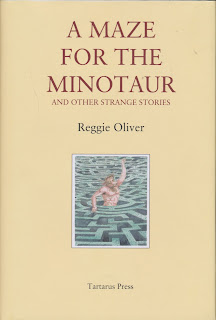 9781912586332
Tartarus Press, 2021
340 pp
hardcover (#47)
Tartarus continues to delight with this newest volume, A Maze For the Minotaur and Other Strange Stories, by Reggie Oliver.    The first time I encountered this most prolific writer was some time back with his The Dracula Papers, Book I: The Scholar's Tale  (Chomu Press, 2011), after which I  began collecting his books as well as several anthologies containing this author's short stories.  He is yet another writer whose tales tip my world ever so slightly askew while reading. That's a good thing.  The publication by Tartarus of this the eighth volume of stories by this author is a milestone: it "marks the fact that they have published over one hundred of his tales."  Here's to one hundred more.
The title story, "A Maze for the Minotaur," is probably one of the strangest in the book and an absolute stunner.  Before moving to a Victorian brothel where a client nicknamed "the Minotaur" by the women there gets his strange jollies, we learn from a newpaper article of December 15, 1897 about the strange disappearance of a certain Mr. Frederick Cooper, a "local philanthropist" and "man of some eccentric habits." Last seen by his groom as he got out of his carriage, walked to his front door and went inside, Mr. Cooper was never to be seen again.  Exactly what happened to Cooper may remain a mystery to the outside world, but the truth is known by a certain young woman by the name of Mabel who "had learned to disguise her passions well," but once these became aroused, "would doggedly pursue them until they were satisfied."   Nothing I can say here will prepare anyone for what happens in Mrs. Belling's drawing room at Number 2 Boscobel Place, nor would I wish to ruin anything by giving away the show.    "A Maze for the Minotaur" first made its debut in Soot and Steel: Dark Tales of London, edited by Ian Whates (Newcon Press, 2019), another sadly still-unread book on my shelves.
The two stories unique to this book are "The Wet Woman," and "Via Mortis," both of which touch on the entertainment world in very different ways.   Anyone who's read Oliver's stories knows that this is a world very much familiar to the author  and that show business in its many forms is often a key feature of his work.   In the first story, a "fairly successful actor" now "out of condition," has been "more or less ordered" by his agent to spend a month in a detox center in Suffolk.  His wife has left him, he's become too fond of a "particular tipple," and he needs to get himself together before the filming of his next movie.  Luckily for him, he meets two fellow inmates with whom he gets along famously, but the fun really begins when the three come across another acquaintance whom the three decide needs to be "shaken from his pedestal." Opportunity arises in the form of Halloween hijinks, but perhaps the three may have taken things a bit too far.   The action moves to the Edinburgh Fringe in "Via Mortis," beginning with a chance meeting of two former colleagues, one of whom went on to become a well-known director, and the other finding less success as an actor.  Talk eventually turns to "recollections of past times," when the two worked together in a small group called the Ruffian Theatre Company and a play called "The Last Man In" which ran for two weeks at an old chapel.  The director remarks that it was "all a complete blur,"  but the shock on his face says otherwise.  I have to admit to a deep fondness for the sort of creepy atmosphere that can only be found in an old church, especially when the lights go out and someone is left behind with no way out.
The full content of this book can be found at the website of Tartarus Press; among other things, in these stories one can find ghosts in the Dordogne,  dream visions, an avian guide (which may or may not be an old friend),  a crime and a haunted house.   One story that was just lovely and particularly poignant is "Collectable," about an elderly performer of times past who "in life had become a ghost," unable to remember her life while waiting out her days in a "Theatrical Old Folks Home."  This one reminds me that horror comes in many different forms, and then there is "Monkey's" one of the most brilliant stories in this entire volume, which I nominate for most disturbing of them all, set on a small, private island in the Thames.  I actually had to put the book down after reading this one, go outside for fresh air and sunlight before I could start reading again and even then the images this story produced never quite left my head.    Off the beaten path somewhat is "A Cabinet of Curiosities," a collection of five short tales, my favorite of which was "Temporary Disappearance of a School," but all are absolutely delightful, a perfect antidote to the darkness that came before.  That leaves me with the one novella-length story that to me didn't quite fit here, "The Armies of the Night," which admittedly had its moments and also  reminded me of the old Delta Green novels I used to devour in my Lovecraft phase, in which the FBI finds itself involved with the stuff of Lovecraftian nightmares become real before moving into the pulp territory of gangsters, J. Edgar Hoover and other stuff. This one appeared in volume two of an anthology called The Lovecraft Squad , edited by Stephen Jones.  And finally, I didn't mention the illustrations, but they are outstanding, serving as signposts to whatever weirdness the reader is about to encounter.
The dustjacket blurb notes that

"Oliver's work is notable for its style, wit humour and depth of characterisation, and also for its profound excursions into the disturbingly bizarre and uncanny"

and I have to tip my hat to this man who's given me so many hours of reading pleasure over the last few years, and to Tartarus as well for bringing forth this eighth volume of Oliver's stories.  It is definitely one not to miss whether you are a regular fan of Oliver's stories, or a reader drawn to the realm of the strange or the weird.  Don't be surprised if you find yourself feeling a bit off kilter after reading this book -- it's part and parcel of the Oliver experience.