Tales of the Tattooed: An Anthology of Ink (ed.) John Miller 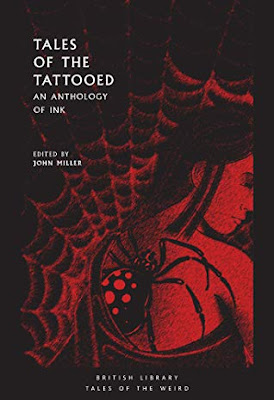 Each time I take one of these books off the shelf, I know I'm in for a few hours of reading pleasure.   I bought my copy at Book Depository since the American publication isn't scheduled until July of 2020 (as if I could wait that long);  should anyone decide to pick up a copy there, it also says that the publication date is July 2020 but it shows as being available, with copies sent out within two business days.

Admittedly, the majority of tales in this book trend less toward what I'd personally consider as weird and more toward pulpy crime fiction (albeit some with a strange edge); given the focal point of tattoos I would have thought there would be plenty more to be found on the weirder side.  Having said that, the stories themselves are entertaining enough; they also, as Miller states in his introduction, "emerge from an intriguing window in tattooing's history."   How that works I'll leave to the reader to discover, but I have to say I was surprised more than once.

The table of contents reads as follows; the starred titles are my favorites:

While not exactly on my favorites list, the opening story gave me my first jolt in the form of a woman who comes to a doctor to have a tattoo removed.  I've read a lot of Victorian fiction, but this is the first time I've read about an obviously well-to-do woman of position who opts to have a tattoo inscribed upon her skin.  I was away and unplugged from the world at the time I read this book, but on the basis of this part of the story alone, as soon as I got home I had to buy one of the sources listed at the end of Miller's introduction, Bodies of Subversion: A  Secret History of Women and Tattoo by Margot Mifflin.  Yes, I am that geeky.    "The Green Phial" is an eerie blend of weird and murder mystery, beginning with a "singular and very vivid dream."  The dreamer, Langholme, is convinced that the tattooed man he encountered in his dream had a similar dream in which he played a role in Langholme's.  When by chance (?) Langholme and his friend run into this tattooed man, Langholme seeks proof that such is the case.  "The Tattooed Leg" is one of the more macabre stories in this book, in which a man whose leg had been lost in a wreck discovers that the tattooed leg under his cast  belonged to another and has been grafted on to his body.  Although he gains assurances from the surgeon that he's going to be "good as new," it isn't long until after being released from hospital that he realizes that something has gone horribly wrong.  Science gone awry is the matter at hand here, with this story making for a fun yet bizarre read.  "Skin" by Roald Dahl has a sort of commonality with Saki's "The Background," but Dahl's story has much more of a finely-honed,  implicitly-horrific edge to it that gave me a true case of the willies.  An older man, down on his luck, finds himself on the Rue de Rivoli where he sees a painting by a Paul Tichine displayed in the window of a gallery.  His discovery takes him back in his mind to a time when he knew the artist; his wife had been Tichine's model back before Tichine was Tichine and before his art was so highly prized.  Entering the gallery, where he is immediately asked to leave, he makes the mistake of revealing that he has a picture given to him years before by the artist.  Not a good move, really.  While "Skin" was downright creepy, Tanizaki's "The Tattooer" works on a completely different level uniting beauty, eroticism, ecstasy, and pain, beginning with an Edo-era tattoo artist with a sadistic edge:

"His pleasure lay in the agony men felt as he drove his needles into them, torturing their swollen, blood-red flesh; and the louder they groaned, the keener was Seikichi's strange delight. Shading and vermilioning - these are said to be especially painful -- were the techniques he most enjoyed."

However, his true desire was to "create a masterpiece on the skin of a beautiful woman."  He'd been searching for the perfect subject for four years without success, but all of that changes when he just happens to notice a most exquisite young woman's foot sticking out beneath a palanquin's curtain.  He continues his search, this time for that one woman; little does he realize what will happen when he finds her.   I love Tanizaki's novels, but sadly I seem to have neglected his short stories, something I'll certainly be rectifying in the near future.

While I've only briefly hinted at my favorite stories above, the rest are also quite nicely done, although in my opinion, the weirdness is a bit tamped down in those.  Overall, Tales of the Tattooed is another fine entry in the Tales of the Weird series, and I haven't found a bad book in the bunch.  I have been highly impressed with the wide range of stories presented in these volumes, and whoever dreamed up the concept in the first place ought to be congratulated.