Ziska: The Problem of a Wicked Soul, by Marie Corelli 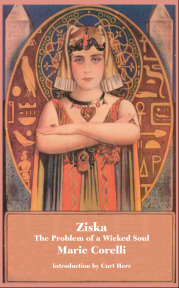 "In certain men and women spirit leaps to spirit, -- note responds to note -- and if all the world were to interpose its trumpery bulk, nothing could prevent such tumultuous forces rushing together."

Think what you will, but I love Marie Corelli's novels, at least the few I've read so far, with others waiting for my attention on their shelves.  The critics of her day had little nice to say about her work, but her reading public loved her, from "the eccentrics at society's lower end" to Queen Victoria herself.  One Corelli scholar notes that more than half of her novels were "world-wide best sellers," with more than an estimated 100,000 copies selling annually for several years.  Corelli's  1895 The Sorrows of Satan, according to Annette R. Federico in her book Idol of Suburbia: Marie Corelli and Late-Victorian Literary Culture, had an "initial sale greater than any previous English novel," selling twenty-five thousand copies its first week with and fifty thousand over the next seven weeks (2000, University Press of Virginia, 7).  Curt Herr, in his introduction to this Valancourt edition of Ziska, notes that 1897 also saw the publication of Stoker's Dracula and Richard Marsh's The Beetle, and that Corelli  outsold "Stoker and Marsh by the hundreds of thousands" (xi), which sort of begs the question as to why today she is all but forgotten, which is a true pity.


There is no messing around as the story begins; the prologue puts us in the Egyptian desert of long ago, on a night when  "the air was calm and sultry; and not a human foot disturbed the silence."  A "Voice" breaks the stillness towards midnight,  "as it were like a wind in the desert," crying out for


" 'Araxes! Araxes!' and wailing past, sank with a profound echo into the deep recesses of the vast Egyptian tomb. Moonlight and the Hour wove their own mystery; the mystery of a Shadow and a Shape that flitted out like a thin vapour from the very portals of Death's ancient temple, and drifting forward a few paces resolved itself into the visionary fairness of a Woman's form -- a Woman whose dark hair fell about her heavily, like the black remnants of a long--buried corpse's wrappings; a Woman whose eyes flashed with an unholy fire and waved her ghostly arms upon the air."

Flash forward to contemporary Cairo, where "full season" is in swing, where the "perspiring horde of Cook's 'cheap trippers' " have flocked for their holidays. We are introduced to one such group of British tourists, some of whom are in the lounge of the Gezireh Palace Hotel discussing  the arrival of the famous French painter Armand Gervase while others are preparing for a costume ball.  Expectations are highest, however, over the attendance at the ball of a certain Princess Ziska, of "extra-ordinary" beauty.  As the festivities begin and Gervase and the Princess meet, he is stunned:


"There was something strangely familiar about her; the faint odours that seemed exhaled from her garments, -- the gleam of the jewel-winged scarabei on her breast, -- the weird light of the emerald-studded serpent in her hair; and more, much more familiar than these trifles was the sound of her voice -- dulcet, penetrating, grave and haunting in its tone."

Ziska captivates this small group of tourists with her dazzling beauty and stories of ancient Egypt, but none more so than Gervase, who begins to believe himself in love with her, and  Denzil Murray, whose sister Helen knows that his obsession with the princess will eventually come to no good.  After confiding her woes to keen observer/researcher Dr. Dean of their party,  he notes that they have been caught up in "a whole network of mischief, " and that the


"...spider, my dear, -- the spider who wove the web in the first instance, -- is the Princess Ziska and she is not in love! ... She is not in love with anybody any more than I am. She's got something else on her mind -- I don't know what it is exactly, but it isn't love."

As Gervase, as the back-cover blurb states, becomes more and more "haunted by strange and distant memories of her" over the short time in which this story occurs, it will become ever clearer exactly what it is that Ziska has on her mind.

The pulp/supernatural/gothic/occult-fiction reader in me of course positively swooned over Ziska, and if story alone was what it had amounted to I would have been happy enough.  Although I knew eventually what was going to happen here, it didn't matter -- the novel makes for an intense, compelling read.   But of course, there's always more that is not-so hidden under the surface with Corelli, whose beliefs often make their way into her work as debate between characters, and this book is no exception.  She begins right away with a look at the cultural imperialism of her day before tackling upper-class society, love, marriage, gender, and  her stock in trade, the undying soul.  Curt Herr has provided an excellent introduction that discusses all of this and more, including brief comparisons to the two other novels published the same year that I mentioned above.

'tis an old book, but a fine one, and I loved every second of it.  I really can't ask for more.