in which the angel in the house becomes delightfully devilish: The Strange Transfiguration of Hannah Stubbs, by Florence Marryat 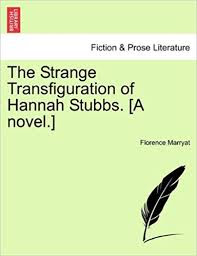 H.G. Wells evidently didn't care for this book, saying that it was  "absurd," and that rather than "transfiguring Spiritualism," as was its intention,  it made Spiritualism to seem a "highly dangerous and idiotic pastime."

Another reviewer from The Academy (1896) also criticized it, commenting that if "this volume was intended to commend spiritualism to unbelievers," it would more likely, in his opinion, "confirm them in their scepticism."

I settled on this book as an October read because I was looking for a novel with a séance, so when I found this one, I was a happy camper.   I'm a fangirl of Florence Marryat's novels and this book is one of hers that I hadn't yet read.

Author and scholar Michael Sadleir, as quoted in Sutherland's  The Longman Companion to Victorian Fiction (Pearson, 2nd ed, 2009) said about Marryat's  work that it was  "dangerously inflammatory fiction, unsuitable for reading by young ladies..." which was my original invitation to read her works, and I have to say that in this case he was probably correct.  (416)  This is one of the most lurid supernatural Victorian novels I've encountered up to now, and unlike the two contemporary reviewers quoted above who seemed to have missed the point,  I quite liked it.  The Strange Transfiguration of Hannah Stubbs ticks more than just a few of my reader boxes:  it is the story of a vengeful ghost, has the feel of a sensation novel cloaked in spiritualist garb but turned completely on its head, and it simultaneously engages topics and themes of fin-de-siècle New Woman literature.   It's also fun -- what more can I ask?

The story is centered around a natural spirit medium,  young Hannah Stubbs.   It seems that around Hannah, the furniture "dances,"  "shadders" appear, and "woices" haunt her at night.  Her mediumistic powers are so strong that they completely disrupt life in the family  home in Shropshire, providing the reason for "many a beating." They've also come between her and her young man  Joe Brushwood, to whom she had promised that she would try to stop "raising them sperrits." It's a promise she is unable to keep, however, and things get so bad that her mother feels she has no alternative but to find her a position in service with a family friend in London, a Mrs. Battleby.    Poor Hannah wishes for a normal life so she can go back to the country and to Joe,  but she is unable to stop all of the phenomena, no matter how much she wants to.

Enter Mrs. Battleby's lodger, Professor Ricardo, formerly the Marquis of Sorrento before exile and the relinquishment of his title.  While Mrs. Battleby  is constantly on the verge of turning Hannah out because of the disruptions in her home,  the Professor is fascinated.  As it happens, the death of his wife Leonora has left him wishing he could speak to her again (for reasons I won't mention here), and he has turned to an intense study of "the Art of Magic" to make it happen.  He  has also constructed a "séance room" in a part of his lodgings, and it is there that he shuts himself in to "burn the differing incenses recommended in the books of Magic," waiting to commune with spirits.  After he witnesses firsthand the phenomena that follows Hannah, he tells Mrs.  Battleby that Hannah is a "victim to what we call hysteria," and that if Hannah agrees, he will "undertake to cure her."   Eventually he also convinces Hannah that under his guidance, and that of his friend Dr. Steinberg,  she would be "quite cured of the annoyance she objected to."   Thus begins a series of "experiments," designed to heighten Hannah's powers while she sleeps (shades of Trilby!) to take them even further, with the aim of bringing forth the spirit of Leonora at his beck and call.  However,  a misunderstanding on the landlady's part gets both Hannah and the Professor tossed out of Mrs. Battleby's home; neither her mother nor Joe will have her back, so Ricardo decides that it would be beneficial to both if he and Hannah marry.

At this point is where this story really begins, and we follow Hannah as she is molded and shaped by both men to suit and to exploit their own needs and desires.   What neither men realize, however, is that once they've opened the door, there is no going back; they will be left to  deal with the "transfiguration" fallout and neither are prepared for what comes next.  As both will discover, "it isn't all jam to have a medium in the house."

I think I might agree that on the face of it the plot, as Wells so eloquently put it, may seem "absurd," but there is method to Marryat's madness here, as there is in many of her later novels.  There is so much at work here under the surface that I could never  cover it in a short post; suffice it to say that this could easily be included in a study of Victorian women's  fin-de-siècle literature.  The novel is delightfully subversive,  it makes for fun supernatural reading, and I can't help it -- I am a huge fangirl  of  novels in which there are séances.  I got way,way more than I bargained for here.