The Stone Dragon and Other Tragic Romances, by Robert Murray Gilchrist 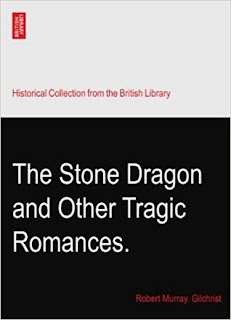 "It has ever been my belief that love, nay, life itself, should terminate at the moment of excess bliss."  -- from "The Noble Courtesan," 108

When the gloves made of human skin first made their appearance in the titular story, "The Stone Dragon," I knew I was going to love this book. And I did. A lot.


Robert Murray Gilchrist (1867-1917 -- you can read about his life here) first appeared on my radar after I read Prince Zaleski, by MP Shiel.  I picked up this book after doing a bit of reading in Brian Stableford's most excellent study Glorious Perversity, and discovered that Stableford added The Stone Dragon and Other Tragic Romances into the mix of his  "most intensely lurid products of English Decadence" between 1893 and 1896, along with Studies of Death, by Count Eric Steinbock, the aforementioned Prince Zaleski, Shapes in the Fire (also by Shiel), and  Machen's The Great God Pan and the Inmost Light (119).   [As an aside,  two months ago I  preordered Of Kings and Things: Strange Tales and Decadent Poems by Count Eric Stanislaus Stenbock, supposedly published in July of this year.  That will be a drop-everything book, for sure.]

As the article in Derbyshire Life and Countryside I linked to above states, this book was "initially scantly-praised," but "interest in Gilchrist has revived," with The Stone Dragons and Other Tragic Romances becoming a modern favorite.   That article referred to this book as including "ghost stories, Gothic horror and 'weird tales'"; it also, in my opinion, has a nice Beaudelaire sort of feel (from Les Fleurs du Mal), an eeriness that reminds me of Poe, and in some stories, it reminded me of the French contes cruels that I love so much, since Gilchrist doesn't resort to contrived happy or expected endings.  Au contraire -- his stories, for the most part, reflect the quotation with which I started this post -- "...love, nay, life itself, should terminate at the moment of excess bliss."  This sort of theme is played out time and time again, along with another idea that permeates this book, stated most clearly in the story "Althea Swarthmoor."  He lets us know (in case we haven't figured this out by the time we get to that tale) that we are going to be talking about


"...Passion and of Death, and how they oft walk hand in hand together..."

Considering what happens repeatedly throughout this book, it turns out to be one of the most morbid set of tales I've ever encountered, and the moment I finished I seriously wanted to read it all again.  I didn't, but I really wanted to.

Here's what's in the book (with just the vaguest of hints but absolutely nothing more):
"The Stone Dragon," in which a domineering aunt reaches out from beyond the grave to continue her control over her nephew via a strange passage in her will.  This story is followed by "The Manuscript of Francis Shackerley," an absolutely stunning and disturbing tale of a husband's revenge.  Next up is "Midsummer Madness," another bizarre tale where a bridegroom learns that "it is well to be mad..." and then there's "The Lost Mistress," a beyond-tragic tale of a man who was "grotesque, even to ugliness" and the woman who once loved him.

About "Witch In-Grain" I will say nothing;  "The Noble Courtesan" follows the story of two brothers who had the unfortunate pleasure of the company of the strange woman in the green veil.  Check it out, French contes cruels lovers -- one of the brothers here is named Villiers -- a nod, perhaps, to Villiers L'Isle Adam??  "Althea Swarthmoor" has one of the most hypocritical characters ever in this story, told largely via letters; at this point we turn to a creepy tale whose ending should make anyone gasp, "The Return." That one is followed by another frighteningly weird story called "The Basilisk" about a woman who talks of seeing something in her childhood that turned her to stone. The meaning of that rather curious remark will be made clear later in this tale.  Yet another creepy tale is next, "Dame Inowslad," a perfect late-night read. No details here -- this one you must experience.

Rounding out the remainder of the stories here are "Witherton's Journal," an artist's story and that's all I'll give away;  'My Friend," which is different enough to merit a second read -- here, instead of passion between a man and a woman, we find a "friendship" between two men.  The narrator of the tale reveals that "farther and farther" he had "ventured down the heretical abyss," and given the time frame, well ...  It is an excellent story with some surprises in store.  The last story is "The Pageant of Ghosts," yet another one about which to tell is to spoil.

It's not so much the content of the stories in this book that did it for me, but rather the way in which they are related.  It's hard to convey in words the aesthetic beauty I discovered in the author's writing, since it's sort of a gut thing, but when I'd put the book down it continued to call to me, kind of like a disembodied hand in a floaty sort of darkness waving me back to it each time.  The atmosphere is intense, dark, and eerie to the point where once inside the book I didn't want to leave.  Honestly, it's still haunting me, and it's rare for me to encounter a book that will just not leave my head.  Now here's the caveat -- it's definitely Victorian, meaning that it is not an easy read in terms of prose style.  Another thing: anyone deciding to read this book strictly for its weirdness or hoping for shocking horror may be a bit disappointed.  There are stories that are supernatural in nature, there is a lot of weirdness going on, but for the most part we're looking, as the author tells us in no uncertain terms, for that mingling of "Passion and Death."  Going into it solely with the expectation of a few supernatural thrills is not the reason for picking up this book.  It's well beyond that, and to label it as simply "weird" or "horror" doesn't begin to touch what's in here.

For readers who want more in their reading of the strange, and don't mind having to be patient with the prose, the payoff is immeasurable.

by the way, my copy is the British Library reprint edition (2010), but Valancourt also published The Stone Dragon and Other Tragic Romances as an e-book for those who don't do print any more.