book #3 in my British Library run, a serious case of happy camperville: Dreamland and Ghostland: An Original Collection of Tales and Warnings from the Borderland of Substance and Shadow, Etc. , Author Unknown 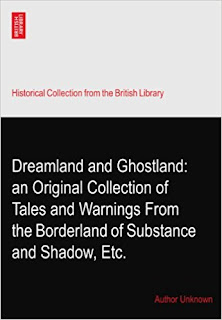 This book just might win the prize for longest title ever:

Dreamland and Ghostland: An Original Collection of Tales and Warnings From the Borderland of Substance and Shadow:

Remarkable Dreams, Presentiments, and Coincidences: Records of Singular Personal Experience by Various Writers; Startling Stories from Individual and Family History; Mysterious Incidents from the Life of Living Narrators; and Some Psychological Studies, Grave and Gay.

There are another two volumes following this one: Dream Warnings and Mysteries:  Strange Stories of Coincidence and Ghostly Adventure and Ghost Stories and Presentiments.  I'll probably get to those at some point -- if they're anything like this one, they'll be completely worth it.  Volume I is an experience in itself. I don't know if it was done purposefully, but there are thirteen stories here, a mix of dream tales and ghostly encounters, all collected by "The Editor" who has, over the years,


"come across some extremely curious and interesting narratives,"

some of which "now the see the light for the first time."    While the collection is supposedly compiled from works of anonymous writers, the Editor reveals in the preface that he wasn't really "at liberty" to "give specific names attached to certain facts" that came to his notice "through personal acquaintance with the narrators," so that he could then try to "point out" which were actually real experiences and which were "a germ of reality expanded and coloured in the hands of a practised writer."  He also reveals that some of the writers whose work is represented here did not want publicity "either for personal or family reasons."  I can say that these were all stories I've never read, so it was a serious case of happy camperville for me.  In case no one's noticed yet, I live to find original old tales like these to add to my mental database.

Many of the dream-based stories are of the type where a dream one day foretells the future of the dreamer; more than one of these involves bilocation of some sort, and these are not limited to sleep-based dreams, either.  As just one example of many, in "Mab: The Woman of the Dream," a young girl staying in a country home goes off one afternoon into a sort of trancelike state in which she "looked more like an automaton than a woman."  During the time she's not in the active world, she is drawing a portrait of a man she's never seen; surprises ensue.   The dream tales don't all run in this particular vein,  but that one begins the collection and it drew me in, immediately whetting my appetite for more.  The best dream story in this book has to be "A Double Event; Or, 200 to 1" in which a poverty-stricken man places his bets on a horse he'd dreamed about, wins, and becomes a slave to the bookies from then on.  Now, years later, he has a chance to redeem himself on a horse that came to him via the same medium and he just knows it's a surefire deal.  But of course, there's a twist here that I never saw coming.  Coincidentally, this one happens to be one of my favorite stories in the book.

While the book is dominated mainly by the dream tales, there are a few ghostly tales here that are top notch.  "Cousin Geoffrey's Chamber" is one of these, a good, old-fashioned spooky story that not only takes place in a big English country house, but also provides a chill when the ethereal encounter leads to the unexpected for the unlucky human involved.  In "The Brand of Cain, Or, What Could it Be?," we find another fine bit o' the creep factor at play as a strange woman  takes up residence in a newly-built home.  A friendship costs this woman plenty, but that's all I will say.

There is much more strangeness to be had in this little book, which will most likely be more of interest to people like me who are very much into the discovery of older tales, most especially as the Editor wrote, those which are now seeing "the light for the first time."  I haven't looked to see if this book is online but if it is, and you don't want to shell out the price for the paperback, it might be one to put in your e-reader's reading queue.  I get that dream stories are pretty old hat now, but hey -- these are definitely worth the read.