from well-known to truly obscure, The Haunters and the Haunted: Ghost Stories and Tales of the Supernatural, (eds) Ernest Rhys and M. Larigot 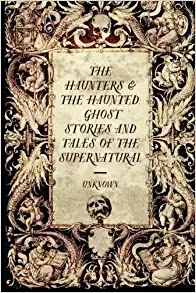 The cover of my edition of this book shows the author as "unknown," but a little digging reveals that it was writer (and editor) Ernest Rhys who was responsible for bringing us this volume of ghostly and supernatural tales.  Rhys (1859-1946) according to an article in the Oxford Dictionary of National Biography (ODNB, 24 May 2007) began his writing career in 1886, where in London, he established his "base as the British Museum Room," and became a "familiar figure in literary London."  He had a "passion for eastern mysticism,"  was a friend to Yeats and Madame Blavatsky, and was part of the founding group of the Rhymers' Club.   However, Rhys' claim to fame was not so much his poetry, but more because of his role as editor of Everyman's Library.  The idea had been conceived by Rhys and J.M. Dent with the vision of, as Rhys puts it,

"a large collection of the great books of the world, in a handsome edition that would be affordable by the common man."

By the time Rhys died, the ODNB article reveals that there were over 983 volumes that had been published for Everyman's Library, and so those of us who have their works in our home libraries now know how it all began.   As far as this book goes, Rhys writes in the introduction that he intended to "widen the area of research, and relate the ghost-story anew to the whole literature of wonder and imagination."    He notes that


"One can take the book as a text-book of the supernatural, or as a story-book of that middle world which has given us the ghosts that Homer and Shakespeared conjured up."

What's interesting here is that the book seems to consist completely of works collected by a M. Larigot, "himself a writer of supernatural tales," as Rhys explains, but I haven't been able to find anything about Larigot anywhere.  Maybe as I get more into French tales I'll come across him, but doing a search brings me back around to this book and Rhys' introduction.  Rhys says that "In this Ghost book," Larigot has "collected a remarkable batch of documents, fictive or real, describing the one human experience that is hardest to make good."  He calls Larigot's collection "varied and artfully chosen," but that's about it except to mention that Larigot had


"in the course of his investigations, during many years, arrived at the conclusion that there is an Art of the Supernatural, apart from the difficult science of psychical research, worth cultivating for its own sake.  So he has gone to Glanvil and Arise Evans and the credulous old books -- to Edgar Poe and Lord Lytton and the modern writers who tell supernatural tales.  He gives us their material insight without positing its unquestionable effect as police-court evidence..."

which, one could take to mean that not only is Larigot an author in his own right, but a researcher into tales of the supernatural, which seems a good guess, since not only does this book present some already well-known stories, but also stories gleaned from Scottish castle lore, Irish legends, various diaries and accounts, as well as stories that go back to Plutarch and Homer.

The Haunters and the Haunted is divided into three distinct sections:  "Ghost Stories From Literary Sources," "Ghost Stories from Local Records, Folk Lore, and Legend," and finally "Omens and Phantasms."    The table of contents can be found here at Project Gutenberg, which contains the footnotes that my edition is missing.   Just an FYI though -- "The Old Nurse's Story" that's mentioned is written by George MacDonald and NOT Elizabeth Gaskell, so don't pass it by thinking you've read it before.  I have quite a few favorites in this section, especially "Teig O'Kane and the Corpse," translated from the Irish by Dr. Douglas Hyde, which is one I hadn't read before.  This story is truly one of the best in the entire book, and focuses on a young man who won't heed his father regarding a marriage, preferring instead to "follow on at his old tricks -- drinking, sporting, and playing cards."  That all changes one night when he meets up with a "band of little people coming toward him, ... carrying something big and heavy with them."  What happens next well and truly makes for great ghostly reading.   In second place is "The Seven Lights," from John Mackay Wilson's Tales of the Borders, which is just eerily and creepily delightful but very sad at the same time.   "The Lianhan Shee" by Will Carleton follows in my list of favorites here, in which a wife realizes that showing charity is good thing, but only to a point.   This one has a most unexpected outcome with a nice twist as well.  One more thing about this section -- Bulwer-Lytton's "The Haunted and the Haunters" appears here, and it's the unabridged version, which tends to become a bit tedious after a while but is still quite good.

After finishing the tales in "Ghost Stories from Local Records, Folk Lore and Legends," I decided that it would have been fun to sleep in an old haunted Scottish castle for even one night.  Glamis and Powys castles are represented here, as are various British homes (halls, if you will), and then comes a strange but good one called "Croglin Grange," which isn't at all a ghost story but I won't say what it is exactly so as not to spoil it.  I ended up spending a lot of time researching this particular tale for my interest in the legend itself and how it's been handed down over time.  Don't go looking it up though until you've read the story because you'll wreck it for yourself, and you really, really don't want to do that.

Under "Omens and Phantasms," there's what I would consider a rather obscure ghostly tale called "The Vision of Charles XL of Sweden," which, interestingly enough, (supposedly) comes from an historical document.  This one was just great and the imagery amazing.  There's also a very different version of "The Pied Piper," that sent me looking at all of the various retellings of this one,  a no-miss story called "Anne Walker," with a plot that's been used many times but is still well worth the reading, as is  "The Hand of Glory." My favorite, though is "The Bloody Footstep," another one where giving away the plot would just not be a good idea.

On the whole, this collection is probably most geared toward readers like me who have not only an interest in older ghostly tales, but who also are into the history behind them.  Some of these stories are very short, a paragraph in length, and if you don't read French you'll want to skip the small piece about Joan of Arc, which was left untranslated.  I will say that the best way to read this book is probably the Project Gutenberg version, since my edition has omitted the footnotes which to me are absolutely critical. Then again, I'm a nerd and enjoy knowing where things come from so I can go look them up.   There will be something for everyone here, especially anyone looking for something way, way off the beaten path.

It was a great book to curl up with during late nights of zero sleep, and one I'd recommend but more to nerdish people like myself.