Strange Tales from a Chinese Studio, by Pu Songling 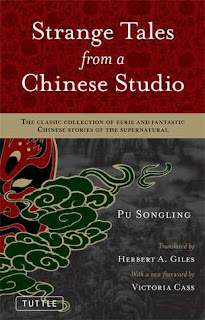 It has been a while since I've been here and much has happened in the meantime but life is settling down once again which is a good thing. Whew!

To give this book its due would pretty much need an explanation of its place in classical Chinese literature,  the history of its literary predecessors which hail from from the Six Dynasties period and the Tang Dynasty, along with at least an intro to Chinese religious/superstitious thought, the Imperial examination system, the Imperial bureaucratic/government system and well, the list goes on.   If you're at all interested in an excellent, in-depth study of not only Pu Songling but of Liaozhi tales themselves,  there's a wonderful book by Judith T. Zeitlin called Historian of the Strange: Pu Songling and the Classical Chinese Tale available in paperback that should not be missed.

It is from Zeitlin's translation of Pu Songling's own Preface that we get an inkling of how the author put these tales together:


"I am but the dim flame of the autumn firefly, with which goblins jockeyed for light; a cloud of swirling dust, jeered at by mountain ogres. Though I lack the talent of Gan Bao, I too am fond of  'seeking the spirits'; in disposition I resemble Su Shi, who enjoyed people telling ghost stories.  What I have heard, I committed to paper, and so this collection came about. After some time, like-minded men from the four directions dispatched stories to my by post, and because 'things accrue to those who love them,' what I had amassed grew even more plentiful.  Indeed, within the civilized world, things may be more wondrous than in 'the country of those who crop their hair' before our very eyes are things stranger than in 'the land of flying heads.' " (44) 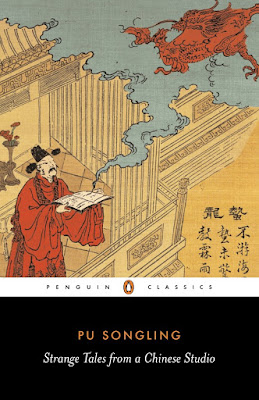 Pu Songling (1640-1715), according to John Minford (whose translation of some of these strange tales is found in the Penguin edition of Strange Tales from A Chinese Studio), was on his way to "a distinguished career as an official," but sadly, after having passed his first series of exams with flying colors, couldn't quite make it beyond his first degree.  Minford says that from age nineteen to age 72 he was a "perpetual student, locked into the 'examination hell' of the Chinese civil service recruitment system," and served as tutor or private secretary to support his family.  His failure left him with a lot of time on his hands, allowing him to write, (xi-xii)  and so we have this wonderful collection of tales that comprise (again turning to Minford)


"longer stories with complex plots, often involving relationships between men, fox-spirits and ghosts, sometimes interweaving the events of several incarnations. Then there are a large number of medium-length tales dealing with a variety of themes: the foibles of spiritual or alchemical pretension, both Buddhist and Taoist; the workings of illusion and enlightenment; and the ways of human vanity and corruption in general.  These are interspersed with brief accounts of strange phenomena (earthquakes, hail-storms, mirages), of unusual skills (rare sorts of kungfu, mediumistic skills -- genuine or otherwise -- strange performances with animals, obsessions with snakes; descriptions of unusual varieties of bird, fish, turtle and alligator, of magical stones, bags and swords; and tantalizing evocations of the transience of life, of strange tenants and abandoned halls." (xiii-xiv)

I might also add that it also quickly becomes apparent while reading that those involved in the examination system are a central focus in many of these stories, since many of his examiners are not beyond taking bribes, corrupt, and some are downright criminal; most of his "heroes" are plain, ordinary, and very poor scholars who most likely serve as the author's alter ego, if you will.   And since what happens below mirrors what happens above, you find the same sort of thing among the officials who govern hell, which is the location of many of the stories found in this book.

I did sort of flit between the Penguin and the Tuttle editions while reading this book -- as grateful as I am to Herbert A. Giles for his outstanding scholarship (and for also giving me a great start in trying to understand classical Chinese well over a decade ago), his version of Strange Tales from a Chinese Studio has much less to offer than Minford's.  Minford breathes life into the stories he's translated  while Giles' version ends to be a bit on the dry side;  there are also some big differences in the translations themselves.  I found myself going back to the original Chinese more than once to try to sort things between the two English versions and decided I preferred Minford when all is said and done.  I will also mention that in Zeitlin's book, she takes the reader through a number of these stories, so that you get the feel for what to look for as you read.

I love Chinese classical works and this one with its focus on "strange tales" made me a seriously happy person while reading.  It's not a book you can read in one sitting, and it's certainly not one to speed read because there is so much at work here within each story that needs time and thought to try to suss out what's really happening.

I leave you with some excellent advice from nineteenth-century commentator Feng Zhenluan who says the following (as quoted in Minford) about reading Strange Tales From A Chinese Studio which I found helpful: