The Victorian Chaise-Longue, by Marghanita Laski 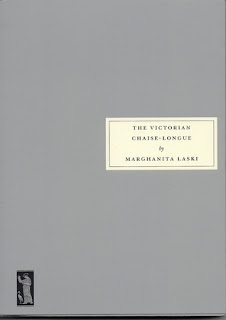 At the end of this novel, I was actually very relieved to be out of it -- not because it's not good (it's excellent, as a matter of fact) -- but rather because while I was in it,  I felt as trapped and as powerless as the narrator of this story.  In fact, those two words -- trapped and powerless -- are actually good concepts to use here in thinking about the novel as a whole.

I'm not really going to do much of  that here though, since The Victorian Chaise-Longue is one of those novels that a reader actually feels and so to give away too much just plain wrecks the experience.

We meet first a rather over-indulged, somewhat spoiled Melanie Langdon who has just recently had a baby boy.  She had been diagnosed with tuberculosis early on in the pregnancy, but her two doctors had allowed her to carry her baby to term.   Now, it seems, the doctor has given her a bit of happy news: as long as she continues to rest, to treat herself as if she were "a piece of Dresden china," and have three good TB tests in a row, she'll be able to play with the baby every so often. Not only that, she'll be able to leave the bedroom, the scene of her long confinement, for a "change of view."  The drawing room seems the right place, and Melanie has decided that she could rest on the old Victorian chaise-longue that she'd bought just after she discovered she was pregnant.

She'd found it in an antique shop where she was looking for a cradle, and knew she had to have it -- as she notes, she had a "profound want of this Victorian sofa."  It had the "singular startling quality of berlin-wool cross-stitch embroidery that sprawled in bright gigantic roses from the top of the head-rest to the very end of the seat".  It also had a "brownish stain on the seat," which Melanie didn't care about.  As she looked at it,


"she tried to envisage the frail young mother in the floating clouds of negligée, the tender faces of solicitous admiring friends, but the picture remained in unfelt words, and instead of it there was only her body's need to lie on the Victorian chaise-longue, that, and an overwhelming assurance, or was it a memory, of another body that painfully crushed hers into the berlin-wool."

From then on, it had been an unused fixture in the drawing room of Melanie's house;  back in the present, happy to be away from the bedroom, Melanie lays down on the chaise-longue for the first time:


"And as she lay there, so nearly, so very nearly asleep, she was unthinkingly aware of the sky and the flowers and the music, of the sun-warmed air on her body that was at last sure of happiness to come. Time died away, the solitary burden of human life was transformed in glory, and Melanie, withdrawn in ecstasy, fell asleep."

She awakes in a "darkness charged with a faint foul smell," and finds herself in the middle of what can only be described as a nightmare that just keeps getting worse as time goes on. The first thing she hears is someone asking her if she's "ready to wake up now," but the question is addressed to "Milly," rather than "Melly," -- and at some point she realizes that she's no longer in her own home or her own time, but in the year 1864.  And that's just the beginning of Melanie's nightmare.

While the novel most certainly reads like a horror novel (and it is most certainly horrific, trust me on that one),  it is impossible to miss what Laski is saying here about women and their lives. By the 1950s, it seems that in some ways, not much had changed from a century earlier -- I used the words "powerless" and "trapped" at the beginning of this post, and  these words epitomize the plights of both women. The idea plays out over and over throughout this story; I'll leave it to others to figure out how.

So - after finishing, a reader's first thought just may be -- "what the heck is going on here," because there are a number of ways the story might be interpreted.  For example, is there something mentally off with Melanie? Or is this book just one long dream that we've stumbled into? Or is it something else entirely?  One thing I noticed was the use of the word "ecstasy" in several places here, so geekperson that I am, I googled "Marghanita Laski and ecstasy" and  I discovered that she had actually written a book in 1961 called Ecstasy: A Study of Some Secular and Religious Experiences.  According to one scholar, in that book, she discusses "the numinous," examining

in order to seek out commonalities.  What follows briefly in that paragraph opened my eyes a bit and offered food for thought relevant to Laski's novel.  It made me wonder if Melanie herself had been somehow caught up in some sort of numinous moment or numinous space (which then required me to go back and reread the novel)  but as I said -- there are different possibilities to explore in this book, which is why I'm adding it to my real-world book group's reading list for October. It is just perfect for an in-depth group discussion, with so much to talk about and to mull over.

To say I was locked into this book is an understatement .  It is just so powerful and when I say that it didn't let me go, it's not cliché --  I really mean it.  I was so eager for the book to end, not because I didn't like it (I loved it), but because I was actually starting to become claustrophobic and panicked while reading it.  I swear -- a book that can mirror the feel of what's happening in the text in the mind of the reader is just too good not to read. It won't be for everyone, since there are no easy answers here, but for those who like an intellectual challenge and who like to put their brains to work, it's beyond excellent.