The Outcast Spirit and Other Stories, by Lady Dilke 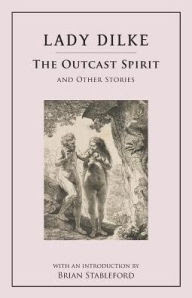 paperback - my copy from the publisher, so my many, many thanks to Anna.


The back cover blurb of this book says that "there is nothing quite like the short stories of Lady Dilke in the annals of English literature," and although I can't rightly say that I'm familiar with the entire  "annals of English literature," I can say that the stories inside this short book are delightfully different than anything I've ever read.  This is one of the very best story collections I've ever experienced, heightened by the sort of dreamlike quality hovering around each and every tale.  Don't let the fact that it's only a short 150 pages fool you -- this book is filled with some of the most complex tales I've ever encountered.

Brian Stableford's introduction to this book offers a brief biography of this author, and there are several places online where you can find  biographical information about her as well, so I'll just offer a few interesting factoids:  she was a well-known figure in her day, with friends such as John Ruskin and George Eliot.   A brief blurb from the UK's  National Portrait Gallery reveals that she was a "scholar of French art and culture," going on to become The Academy's art editor as well as  a rather prolific writer of well-known "volumes on painters, sculptors, engravers, architects and draughtsmen in eighteenth-century France (1899-1902)."  An early biographer notes that  Lady Dilke was also "absorbed by zeal for social reform," and, according to Stableford, she "tirelessly" campaigned for women's rights more than ten years before "the explosion of the suffragette movement."

At this point someone's reading this and saying yeah, well, that's all very interesting, but what about the book?  Worth mentioning here is that one of the most unique aspects of Lady Dilke's fiction writing is that from a young age, according to Stableford, she'd "suffered from 'hallucinations'," of which she started keeping a record, trying to "anchor" them "scientifically and philosophically," but also with the idea of "developing them in future in a methodical literary fashion." Trust me -- this little factoid becomes very apparent while reading her stories. He also notes that despite the fact that Lady Dilke seemed satisfied in life, some of these stories seem to "embody feelings that the author had about aspects of her own life," an idea supported in the memoir of his wife written by her second husband as part of her The Book of the Spiritual Life, in which he states that she "wrote her stories to lay ghosts."  Just what ghosts these might be I will leave to the reader to discover, since  these stories are highly allegorical, and  most are downright disturbing when you stop to consider what you've just read.   Some you'd swear were written during medieval times, and most all of them are filled with some sort of supernatural elements at play which differ from story to story.

Bypassing my usual pattern with short-story collections,  I'm not going to go into each story here because to disclose anything at all about these tales would be doing a serious disservice to potential readers. While I enjoyed each and every one of these stories,  I especially loved "The Hangman's Daughter," a shiver-producing little story, followed by "The Triumph of the Cross," both of which fit together nicely because of their historical aspects, but the one that really wowed me was "The Serpent's Head."  I won't say why so as not to spoil things, but this story is just downright chilling to the point where I had to put the book down, walk away, and wait for a while before returning to it.  I will say that her somewhat archaic language  is not always easy to get through, and that if you think you can breeze through this book's short 150 pages in an hour or two and get the most out of it,  you'd probably be wrong.  It is, as I like to say, a thinking-person's book, one where I felt compelled to stop and consider what I'd just read after each story.  And while I'm neither a true book reviewer nor even talented enough to come up with any sort of  meaningful overall analysis of this collection, my casual-reader self knows exquisite work when I find it.

I think the best way I can describe this book as a whole is to say that it reads like a mix of fables and otherworldly tales. There's also an ethereal quality at work here that sort of blankets the reader in a hazy atmosphere of unreality; the reward is in trying to discern the actual  reality that is hidden beneath the surface.  Very highly recommended -- I live to find books like this one.