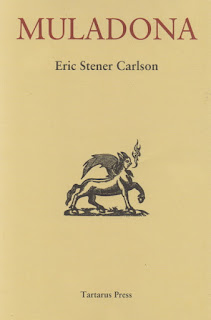 Trying to get myself mentally put back together after a few upsets over the last week or two, Larry and I just spent three days far  from the madding crowd in a cabin in the woods. No television, no people, nothing but silence and the smell of oak trees -- an environment beyond conducive to mental health repair and reading, so read I did, perfectly relaxed while laying out by a roaring campfire.   First book, this one, by Eric Stener Carlson, who is the author of one of my all-time favorite novels, The Saint Perpetuus Club of Buenos Aires (2009).  This time he's given his readers the tale of Muladona, "a doomed soul transformed into the devil's mule," based in part on an old Catalan legend.

This story belongs to Vergil Erasmus Strömberg (Verge),  who tells us at the beginning that years ago he'd promised never to reveal the story of what happened in 1918, but it seems that "recent events" have made it necessary to go back on his word.  His tale takes place in Texas, 1918, as the influenza epidemic rages through the small town of Incarnation.  He's a "sickly boy" whose world is pretty much confined to his house and his books, and those have to be smuggled in by a friend since Verge's father, a coldhearted and narrow-minded Scandinavian Protestant pastor, believes that "anything written after Dante's Inferno" is "pure debauchery."  Verge's brother Sebastian also has an interest of which his father wouldn't approve -- he is fascinated with mythology, anthropology, and mysticism; he also has a keen interest in "magical transformations into animals," and keeps his forbidden collection of books under the floorboards of his room.  When they were younger, they were also transfixed by others who would feed them creepy tales, and one of these centered on the legend of the muladona:


"...when a woman commits an impure act, she becomes the devil-mule at night. She chooses her victims just like the first one ... the liars, the gossipers, the bad, li'l kids. And you'll hear her comin' for ya at night, by the way she clanks the chains of hell."

As the flu wreaks death and devastation throughout Incarnation, Verge, now 13, finds himself alone in the family home.  His mother has been gone since he was seven, his father receives a telegram that takes him away from Incarnation to tend another pastor's flock, and Sebastian has run away from home with the idea of traveling "from reservation to reservation" across Texas to "record the stories of the elders before they disappear," as a volunteer doing ethnological surveys for the Bureau of Indian Affairs.  The woman looking after him also has to leave to take care of her sister, so Verge is left on his own.  It isn't too long before he receives a strange telegram from his brother that at first Verge thinks is a joke, but in reality it is a warning that muladona is coming for him at midnight and an admonition to be prepared.  And when the visit takes place, this strange creature from hell tells Verge  that over the next seven nights,


"I will vi-isit you. Each night, I'll tell you a be-ed time story. Wrapped within the sto-ories are clues to the identity of the person who takes the form of this mi-ighty creature you see before you. A-any time you like, you can throw back the sheets and tell me who you think I am. If you're sma-art enough, Poof! I disappear, and you never have to see me again."

If he fails to guess the creature's name correctly, the muladona promises, Verge will be dragged down to hell. And so the stories begin, as does Verge's torment while he tries to make sense of what he's hearing. 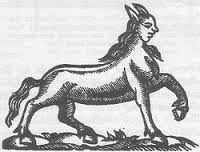 If I try to explain further, I'll wreck things for potential readers, but there is a LOT going on in this book, starting with the intolerance of the good Christian folk who stopped in Incarnation and made it theirs, relegating the "descendents of the natives" who formerly lived in the town's "grand old mansions" to the status of menial servants. As the dustjacket blurb notes, the story takes the reader "through the dark history of Incarnation, from the murder of the Indians by the Spanish settlers..." so beware -- it is not at all pretty.   It's not too difficult to understand the subtext here, but the most interesting parts for me were the stories told by the muladona each night.  Oh my god -- I already knew that this author is one hell of a writer, but I was completely sucked into each story, each one pointing to some horrific realities not just for Verge but also in their repeating themes that I'll leave for others to discover.

I will say that I am not a big fan of monster stories, but sheesh -- this one had me tied up in knots as I waited for young Verge to figure things out.  And what's more, when I got to a part toward the end where Verge warns someone  of the muladona's  impending visit, it dawned on me that Mr. Carlson had set up a world here in which no one thinks our young lad is crazy, but one in which the existence of such a creature is just another part of the landscape.

Muladona is original, fresh, and above all, it is a thinking person's horror novel, which I genuinely appreciate.  It's not some slapdash book that's been thrown together -- au contraire -- it is very nicely constructed, well thought out and intelligently written.  I would expect no less from the author, whose The Saint Perpetuus Club of Buenos Aires is truly a work of genius. He continues that genius here.  Don't miss this one -- mine is the hardcover copy, but there is an e-book available as well. Highly, highly recommended for readers who enjoy the work of excellent writers and for people who like their horror novels more on the cerebral side.  This is a good one, folks.