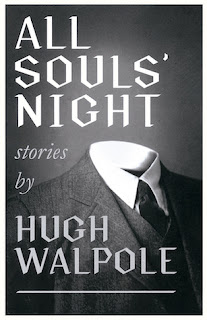 I absolutely had to chuckle at one reader's two-star review of this book -- "charming, but surprisingly old fashioned."  Well, hello --  this collection was published in 1933, so go figure.   He's right on one point, though  -- the book is definitely charming, and once you're into the eerie, strange tales, positively hackle raising.  Let's put it this way: I enjoyed the supernatural stories enough to invest a chunk of change in a "used, like new" copy of the Tartarus edition of Walpole's Tarnhelm, the Best Supernatural Stories of Hugh Walpole, but I also appreciated the not-so-eerie tales enough to want to look into more of Walpole's work.

Strangely enough, it wasn't a story with a supernatural bent that won the day for me in this book, but rather "The Silver Mask," which is probably the darkest tale in this book.  When I find a story like this, my overactive sense of empathy kicks into high gear, making the main character's plight just plain horrific to read, and I'm sure I stopped breathing for a bit as things continued to slide downhill out of control for this person.  I refuse to give up any details, but in this case, calling this entry a "horror" story is beyond appropriate, even without any supernatural elements.

So, let's take a peek at the book as a whole. The introduction to this book (which I saved for last as should anyone planning to read this collection) notes that Walpole's tales


"are transactions with the transitory, with something glimpsed, with the inward and spiritual its counterpoint with the outward and solidly physical."

That is precisely how I would describe it if I had the same writing talent as John Howard who wrote the intro, and to continue, I'd also agree with his statement that


"Walpole tries to comprehend the living as much as the dead and their revenants,"

since it really shows here in each and every story.

Speaking of stories, there are sixteen, given here with absolutely NO spoilers (*denotes the eerie):

"The Whistle," positively spot-on for people who love dogs;
"The Silver Mask", about which I will say nothing, not even the slightest hint
"The Staircase," another one where to tell is to spoil, but I will say that it's rather unique *
"A Carnation for an Old Man," I've seen this sort of thing done before but Walpole does a fine job here *
"Tarnhelm," which is just plain creepy no matter how you slice it. I don't generally like this sort of thing --"the classic werewolf story" as they call it on the back-cover blurb, but this one had me spooked. *
"Mr. Oddy" -- a story for book lovers and one that reminds me of modern readers who don't bother to read anything older than what's currently in vogue.
"Seashore Macabre" made me wonder if this was based on something strange that happened to Walpole as a child.
"Lilac" -- although not so eerie, definitely has some supernatural overtones *
"The Oldest Talland" -- an absolutely delightful tale of an old woman who has tyrannized her family over the years, until one day ... -- not scary, but very well done. It's one where I couldn't help but laugh.

"The Little Ghost" -- worthy of inclusion in a volume of the best British ghost stories. Mum's the word on this one, but oh, that ending!! Yow!! *
"Mrs. Lunt"  --   Whoa. Need I say more? *
"Sentimental But True" -- could be viewed as scenes from a marriage.  This one really gets into its main characters' heads, and it's also  lovely, if brief, look at Cornwall.
"Portrait in Shadow"  -- you'll never look at a wall portrait the same way again.  This one, like "A Carnation for an Old Man," takes place in Spain.
"The Snow" if revenge from the grave is your thing (not a spoiler, on the back cover)  -- look no further. Very nicely done. *
"The Ruby Glass" is another that could possibly reflect incidents from Walpole's childhood; the intro notes that the characters appear in other works he's written, so highly likely.  This one I think is a mismatch to all of the rest of the stories here, and doesn't really seem to belong, but that's just my opinion.
"Spanish Dusk," like two others I've mentioned here, is set in Spain, where unrequited love can be a real bitch.

Unlike some of the characters in "Mr. Oddy,"  who read only what's trendy and modern because    "everything that's old is out of favour with our set,"  I have this deep and abiding love for these older tales, and I was not at all disappointed with All Souls' Night.  As is the case with every single anthology I've ever read, some are great, some are good, and some are just so-so, but which ones fall into these categories are really a matter for the reader to sort out. I liked all of these stories, some more than others, and there really is a wide range here.  However,  if you're in it for just the creepies, well, they're definitely worth the cost of the entire book.

More Walpole in my immediate future, thanks once again to Valancourt.
Posted by NancyO at 10:59 AM