"a story of real horror" : Eltonsbrody, by Edgar Mittelholzer 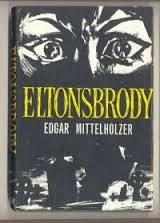 
"Wouldn't you say that a quiet old house like Eltonsbrody is the right setting for mysterious happenings? For gruesome, blood-curdling goings-on?"
-- 118

Mittelholzer throws out a warning to potential readers of this book on the very first page, saying that the tale we are about to read is a

"shocking story -- a story of real horror  -- and anyone who feels that he can't stomach real horror had better go no further than here."

After reading that introduction, in my head I figured things could go one of two ways here: either I'm going to be happily surprised with what's coming next, or I'm going to be really disappointed and never trust Mittelholzer (or at least Woodsley, his narrator) again.  Well, I'm happy to report that Eltonsbrody turned out to be just as the author had promised:  "a story of real horror".  Unlike the other Mittelholzer novel in which I first met Woodsley, My Bones and My Flute, Eltonsbrody is not an outright tale of the supernatural, but it is extremely frightening exploring the horrors that dwell within the human mind.

Set in Barbados, this book begins with the arrival of our narrator Woodsley (a commercial artist), arriving at Eltonsbrody, the old house owned by the eccentric Mrs. Scaife.  Woodsley had been "stranded" in the area after travelling from Bridgetown, and the bus driver had suggested he try the old house, since according to him, Mrs. Scaife is "a koindly lady," who would be "sure to help you out for the night."   He has been invited to stay on, an invitation he accepts, since he's decided that the house will become the subject of his next painting.  So the one night turns into a few more, and over the course of his time there, Woodsley becomes witness to several bizarre and horrific events. But really, nothing is stranger than Mrs. Scaife herself, who has a particular affinity with those people upon whom she sees the mark of death; woe be unto he or she who comes to Eltonsbrody without it.


The wind moans and howls throughout this novel, which like most books I end up absolutely loving, is immersed in atmosphere, and as in My Bones and My Flute and his Shadows Move Among Them, the Caribbean landscape also figures importantly here.  Furthermore, as in both of these books, there is much here regarding race and class integrated into the story as well as art.    But I'm posting it here because as Woodsley notes,  it is a sort of horror story, albeit one that doesn't rely on standard horror/supernatural tropes in favor of the horrors at work in a dark, twisted and downright warped psyche. To me, that makes this novel all the more frightening, and even scarier is the question of how someone's insanity can seem so normal in the mind of the person who is afflicted. As Mrs. Scaife says,


"There are many strange people in this world, you know. Some are laughed at, and some are treated as mental cases -- simply because the normal run of people don't understand their strangeness."

Trust me --  by the time the last page is turned, the "strangeness" in this book will have left its mark.

I am a sucker for stories that take place in old, isolated houses, especially those near the sea, and I was not at all disappointed with this one.  It does take a while for the scary stuff to get rolling, but once it starts, it just doesn't let up until the novel is over, and I guarantee that things will play out in your head as you search for a rational explanation.   Each new creepy occurrence  is more tense than the last until finally, all is made known at the end.  I will say that for some modern readers, the things that happen in this novel may seem a little tame, perhaps a bit laughable, but for me, it was a page turner.  I just love this old stuff, and I'm also starting to really appreciate Mitteholzer's writing and storytelling abilities.

Recommended, mainly for those who've read Mittelholzer in the past and for people who enjoy older books with lots and lots of atmosphere.