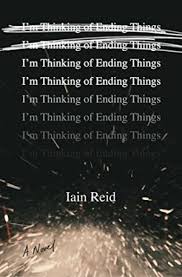 
Before I even start talking about this novel, I have to say up front that while giving a book a one-star review is certainly any reader's prerogative, Iain Reid's I'm Thinking of Ending Things  absolutely does not deserve the nasty, vehement comments that were given to it by some of the Amazon "reviewers"  who afforded it a single star.   Quite frankly, screw that crap.   Far from a logical, rational explanation as to why these people didn't like the book, I was actually taken aback by the level of sheer hateful negativity coming out of these people.  There weren't as many venomous two-star reviews, but even those readers weren't offering any sort of cohesive argument as to why they didn't care for the book.  Shame on you people -- a) go take a basic English 101 course at your local community college and learn how to more logically present a written argument and b) if you're completely flummoxed by the content of this novel, well, seriously ... while you're relearning your writing skills, sign up for a basic course in Jungian psychology.  The author pretty much clues us in as to how to read this book right up front -- it's certainly not his fault that people don't read closely enough to listen.  And if I had any balls, I'd say so on Amazon, but the fact is that I'm completely thin skinned, fairly emotional,  and I just couldn't take the resulting shitstorm. Oh my, my  language is REALLY awful today, apologies,  -- but frankly, I'm just getting downright sick of  how people seem to believe it's their god-given right to unleash their nastiness anywhere they see fit nowadays.

Personally speaking, I thought it was a good, not great, book on the nature of self, the nature of identity, and an interesting take on the darkness of human nature. It's definitely dark, and it is precisely that darkness that appeals to me.  However, what killed it for me is that I figured it all out very early on, so I don't quite understand why so many people were left so confused with this novel, because the author basically gives the reader more than enough clues as to what's going on that it should have been pretty easy to put together and to understand.  While it may have something to do with my long tenure as a mystery/crime reader where I'm used to picking up on certain things that tend to stick in my head, what I really think is that the author made things way too easy here. And in fact, that is my biggest complaint about this book. Having an inkling of what was coming sort of made the big wow not as big for me as it may have been at the end.

On the other hand, despite the fact that  I sort of knew how things were going to play out, my guts still churned moving toward the last page. Frankly, I think Mr. Reid is a writer with much potential, and considering that this is his first novel, I think he's done a pretty good job here, and I will look forward to his future work.