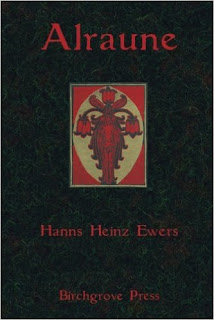 
That decadent vibe -- I just love it and this book is filled with it.  Alraune brings together a bit of the grotesque, the perverse, and all manner of weirdness that appeals, but when all is said and done, it's the German style of decadence that resonates.    It is Ewers' second entry in his Frank Braun trilogy, between The Sorcerer's Apprentice and Vampire, neither of which I've read. Alraune is another word for mandrake, the legends of which  go way back in history, but for our purposes, it's the German version told in this book that's relevant:


"The criminal stripped naked as a pair of tongs and hanged at the crossroads, lost, so the story goes, his final seed, the moment his neck was broken. This seed falls to the ground and there germinates. Thence resonates an alraune, either a little man or a little woman."

In the house of King's Councilor Gontram,  there is an alraune manikin made of wood hanging on the wall; according to the same legend, it "served as an amulet against witchcraft and drew money into the house."  Present at the house when the manikin is discovered is Frank Braun, nephew to Jacob ten Brinken, who is Privy Councilor and scientist involved in some pretty bizarre experiments.  Braun decides that his uncle should "create an alraune: one that will be alive, one of flesh and blood." He is fascinated with the idea, and tells his uncle that he is the only one who can "make truth out of the lie," by bringing the legend to life.  Off to the lab goes our somewhat mad scientist with the sperm of a hanged man, with which he inseminates a prostitute and thus is born Alraune, formed "against all laws of nature." Even before she's born, she can be heard screaming in the womb, much like the mandrake is supposed to sound as it's being pulled out of the earth.  After her birth she is adopted by ten Brinken, baptized, and later sent off to school where she begins to realize that no one, absolutely no one, male or female, can resist her.  People are like Alraune's toys -- she plays with them for a while, gets what she wants from them, and then they are discarded. A better analogy is that she is the proverbial flame luring the moth -- and when some poor soul gets too close to her,  he/she finds his/her wings singed or even sometimes flat out destroyed. The story follows Alraune as she grows up, makes her father's fortune, and plays with people, up until one man comes along who seems to be immune to her.

There are so many ways anyone could read this novel so I'm not going to go into the under-the-surface stuff here.  Suffice it to say that Alraune is downright weird, and its sheer weirdness is augmented by the original drawings by Mahlon Blaine.  For example, here's his depiction of death "gliding through the quiet house" 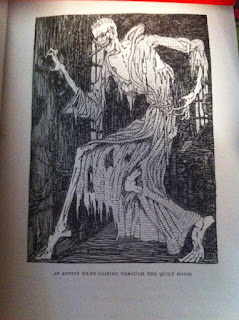 (that's a cigar in the skeleton's mouth), and an illustration of Alraune's "father's" perverse feelings toward her, in a scene where she's dressed up like an "elevator-boy in a tight-fitting scarlet uniform," since it pleases him when she dresses like a boy: 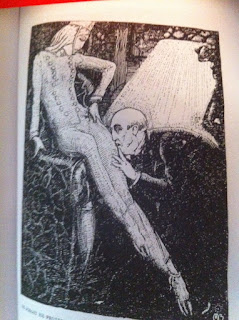 Seriously, there's some very messed up stuff going on in this novel, but by now everyone knows I love really strange books and that I love old books -- Alraune is a bizarre blend of both.  Try at your own risk -- it's really going to appeal to readers who appreciate the old decadent aesthetic, and frankly,  it is just plain odd but I  loved it.  This book crawled underneath my skin and hasn't left. 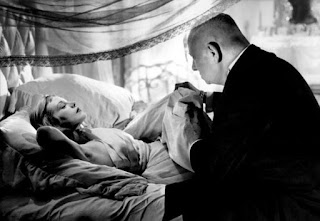 Oh! PS:  I forgot -- I did watch an adaptation of this novel, English title "Unnatural," with Erich von Stroheim as ten Brinken and Hildegarde Neff in the title role.  It leaves a lot to be desired in terms of the novel as well as the acting, but it was still fun.
Posted by NancyO at 11:23 AM