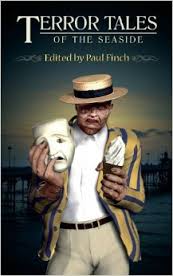 "It's strange how our perceptions of places, events, even people can be totally different from the reality. You convince yourself that something was one way and when you go back to check, it really wasn't."
-- Joseph Freeman, "A Prayer for the Morning"

Trying to get the last couple of weeks of  disturbing images from my reading choices out of my head, I went rifling through my horror shelves for something lighter before moving back into full dark.   I had quite forgotten that I even owned this book, so it was sort of like Christmas when I found it. That happens a lot in this house: buy, shelve, forget, only to be delighted when I come across something I didn't realize I had.

The quotation with which I opened this post really gives a feel for exactly what's going on in this collection of short stories.  Add that to the seaside locations where these authors set their eerie tales, and that's why this book appeals. The back-cover blurb is also enticing,  letting us know that the places we're getting ready to read about have a colorful past:


"The British Seaside -- golden sands, toffee rock, amusement arcades. But also the ghosts of better days: phantom performers who if they can't get laughs will get screams; derelict fun-parks where maniacs lurk: hideous things washed in on bitter tides..."

Editor Paul Finch also gives his readers a bonus: beyond the stories found in this collection:  he has also seen fit to throw in some interesting, often arcane lore between stories. For example, in the short piece about "The Eerie Events at Castel Mare," he tells of a house built during the Victorian period where strange phenomena have been reported, giving it a reputation for being haunted. I won't say more about Castel Mare, but there are thirteen (!) of these little inserts that sent me searching online for more about each.  As interesting as these are, though, there are also fourteen short stories in this book, some of which gave me an outright case of the willies and all of which made for fun reading alone during a thunderstorm.

I'll list the contents here shortly, but first I want to say that of the fourteen tales,  Ramsey Campbell's "The Entertainment" and Simon Kurt Unsworth's "The Poor Weather Crossings Company" are not only creepy but very, very well written, and they are my favorite stories in this collection by far. Very much out of the box and making both time and money spent on this book well worth it,  these two for me are the best of the bunch.  Campbell's story adds a tinge of undisguised anguish at the end which I wasn't expecting, but this tale as a whole should resonate with anyone who reads it.  The beginning of this story reminded me a bit of Priestly's Benighted, in which a traveler finds himself stuck in a storm that is so bad that drivers are being advised to stay off the roads.  Tom Shone is only half an hour from the motorway but at the edge of the town of Westingsea, when he decides he can't go on and needs to find a place to stay. Everything is full, but he lucks out and finds a sign leading to an old "three-storey house." There the similarity with Priestly ends, but Shone has definitely been "benighted" in the strictest sense of the word. When the door is opened after he rings the bell, an elderly woman asks him a rather bizarre question: "Are you the entertainment?"  What follows is downright weird and scary, and in my opinion, somewhat of  a tipping o' the hat  to Robert Aickman's "The Hospice."    Unsworth's story takes the reader to Morecambe, where an advert is posted for a "once in a lifetime opportunity" to "See the Bay as it Should be Seen!"  Taking the little pull-off strip with the telephone number, a man named Sykes decides it would be "something new to do, after all."  He's done the bay walk before, in a tour headed by "the Queen's guide to the sands," but this time around, the walk takes place at night, and the tour guide seems a bit eccentric.  Here the genius lies in Mr. Unsworth's ability to ever so slowly drop his readers into an ominous, off-kilter and eerie atmosphere from the start, and keeping them there, all the while ratcheting up reader tension by turning that screw just a little tighter until ... 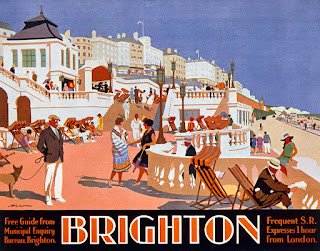 Aside from these two beyond satisfying and delightful neck-hackling terror tales, the rest of the stories are as follows (with the little folklore/arcane knowledge/legends etc in italic):

"Holiday from Hell," by Reggie Oliver another good one that is a mix of horror and ha-ha-ha after I figured out the gimmick here.
The Eerie Events at Castel Mare - Torquay
"The Causeway," by Stephen Laws - such a disturbing mix here as crime and horror blend together into a weird, eerie tale.
The Kraken Wakes - Guernsey
"The Magician Kelso Dennett," by Steven Volk.  If you don't ask "how did he do that?" at the end, there's something really wrong with you.
Forces of Evil - Pittenweem, north of the Firth of Forth
"A Prayer for the Morning," by Joseph Freeman, another favorite because of the frightening  implications of the ending. Wow.
The Ghost of Goodwin Sands - Kent
"The Jealous Sea" by Sam Stone.  Seriously, the writing is good, but variations of this sort of story have  been told many times by different authors.
The Horse and the Hag - Minster-in-Sheppey, Kent 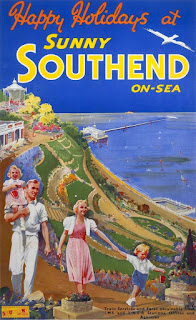 "Bighthelmstone," by R.B. Russell, is way more of a true-life sort of terror than anything supernatural.
The Devil Dog of Peel - Isle of Man
"Men With False Faces," by Robert Spalding.  Dear God.  I hate clowns, and this tale is filled to the brim with them, but the story itself is quite good, and well written.
The Ghouls of Bannane Head - the Ayrshire Coast of Scotland. Sawney Bean ring a bell?
"GG Luvs PA, " by Gary Fry -- you'll never look at words written in sand the same way twice after reading this one. Okay, good, not great.
This Beautiful, Terrible Place - Beachy Head
"The Incident at North Shore," by Paul Finch.  There's something about escaped mental patients and defunct amusement parks that I normally can't resist.  I wasn't really in love with the story, but walking around the old fun park with the main character was eerily awesome.
In the Deep, Dark Winter - Morecambe
"Shells," by Paul Kane.  Okay -- this one is bizarre but very cool; has a sort of slow-burn horror feel to it right up through the end. It also, strangely enough, brought to mind a certain old sci-fi flick starring Dana Wynter and Kevin McCarthy. Guess which one.
The Walking Dead - Berwick-upon-Tweed, Northumbria
"The Sands are Magic," by Kate Farrell,  is just utterly tragic and beyond terrifying in a real-world sort of way.
Hellmouth - Brighton
"Broken Summer" by Christopher Harman rounds out this collection in this story of a man who is either suffering from drug-induced hallucinations or is actually living a nightmare.
Wild Men of the Sea - Suffolk 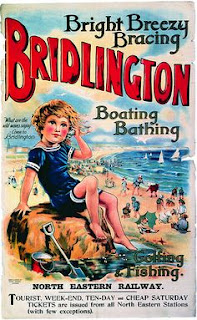 I understand that there is an entire series of these "terror tales" -- with this book, there are nine, I think, ranging from the Lake District up to the Scottish Highlands,  even going out into the ocean!  I'm so there, if this book is any indicator.  As I'm fond of saying, with every anthology of short stories, I can expect some that are excellent, some that are good, and some I don't think are so hot, but as a whole, Terror Tales of the Seaside is entertaining, definitely creepy, and one I can recommend. I'm also very happy to find new authors to read!  This one is really for fans who like their horror more in the cerebral zone; probably not something to read if you can't do without guts and gore.  Must buy more!
Posted by NancyO at 4:00 PM