*a head-spinning, beyond-disturbing experience, and I loved it: The Tenant, by Roland Topor 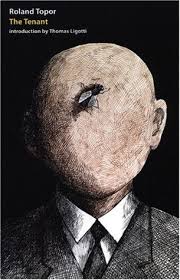 Just in case there's anyone left that doesn't know, The Tenant was made into a film by Roman Polanski.  The movie is freaky but the book is truly beyond disturbing.  Read the book and then see the film; things make so much more sense in that order.

I have looked at a few readers' takes on this book, and see the same thing written again and again: "a vicious satire on conformity."  This phrase, as I discovered, is from Wikipedia, and while it is appropriate, it doesn't even begin to cover what's happening here.  Nor does it give a reader the slightest clue as to just how very dark this book actually is -- Topor's novel burrowed into my head and still hasn't left; I finished it some time ago.  The words "tyranny of conformity" came to mind when describing this book to someone, but it even goes well beyond that.

There is a rare opening in the apartment building on the Rue des Pyrénées, and Trelkovsky, who is facing the prospect of shortly being homeless, decides to jump on it.  When the former tenant, Simone Choule, dies, Trelkovsky moves in. The place is even furnished, since Simone's family doesn't want her stuff; there are reminders of her everywhere.   He's lucky to have the place -- there is a scarcity of available apartments, and he considers himself fortunate. He puts down his money, and at the initial  interview with the landlord, he is told by Monsieur Zy that


"You can see that no one has any trouble getting along with me, so long as he behaves properly, and pays the rent regularly."

Trelkovsky is so eager to get into the apartment that he accepts the conditions. Later, there is a "sort of housewarming" with friends at his place not long afterward, and this is when things begin to change.  The noise made by Trelkovsky's guests brings his upstairs neighbor to the door to complain.  Trelkovsky apologizes; afterwards, back in the apartment, Trelkovsky does his best to quiet his friends, eventually throwing them out. His happiness is now replaced by shame; he even starts to think of himself as an "odious person." As he muses,


"That indescribable din of his revelry had waked up everyone in the building! Could it be that he had no respect for others? That he was incapable of living in a normal, civilized society?"

And here, only some 29 pages in, is where my brain goes click whir, big broad pink highlighter on the phrase as written in my notebook --  now I know what to look for, based on his  mention of his fellow tenants as "normal, civilized society."

To avoid becoming homeless, Trelkovsky no longer invites his friends over; he starts spending quiet nights at home as an insurance policy against a time when he might accidentally make noise.   When there is a robbery and some personal items are stolen, he is urged by the landlord not to go to the police.  He is also told that the previous tenant wore slippers after 10 p.m. Things start to spiral out of control as he comes to realize that with the robbery, he has also lost his past and remnants of his identity; leading him to question exactly what constitutes a self. Unfortunately, as he comes to realize, who he is is no longer his to decide; that decision rests with the rest of the people in the building.    As the neighbors continue to browbeat and persecute him, the outsider/other in this "civilized society,"  into acquiescing, he begins to become paranoid, and finds himself slowly sliding into madness.

That's the nutshell version; to say more would be to ruin it for others completely.

Very early on in this story, the reader understands that  Trelkovsky is an easy target: he  tries very hard to conform to others' expectations,  in real life, hiding his true nature by doing what's expected of him around others. For example, when he goes to the mass for Simone Choule after her death, we learn that he is not religious, but he imitates the movements and attitudes of others. When the thoughts of death are too much for him, he tries to leave but  the door won't open, and he is worried about the "disapproving glances"  of the others there.  When he goes to a movie with Simone's best friend Stella, she hits on him, rubbing her leg against his so he starts touching her, even though he's probably gay.  He even begins to drink hot chocolate in the cafe by his building because the waiter assumes that he wants it because Simone always had it; same thing with her brand of cigarettes.

To me, this novel speaks to alienation within the context of a repressive society; the attempts at imposed conformity and the persecution of the outsider -- extremely disturbing, but in the reading world, I love this stuff. Combine that with an eventual loss of self/identity under the auspices of those who want to define exactly who and what a person should become, and it makes for darkness very readable. Here, we get an example of exactly what it is when I look for while reading -- when does someone reach their breaking point, and what factors combine to bring someone to the edge of that abyss?   It is just so very sad that this novel is out of print and that copies are so bloody expensive -- The Tenant would make a great book to read with a group.  Hell, if I had unlimited funds, I'd buy several copies and start a group just for the purpose of reading it! 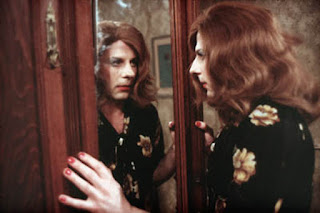 Polanski's film based on this book is also disturbing and really does capture the essence of the novel.  Of course, most of the book takes place within the confines of Trelkovsky's head, so there will naturally be some omissions, but the movie is one of the better screen adaptations I've seen this year. I was alone when I watched it, so I chose to do it late afternoon, but it was so eerie that I had it in my head the rest of the night. Read the novel first though -- I was so happy I did it in that order.

Book and movie -- both very, very highly recommended.  Just be warned. Neither is liable to leave your head for some time.
Posted by NancyO at 7:19 AM