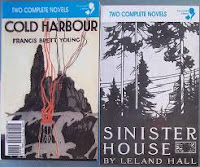 Two books in one volume isn't so odd, but two books in one volume where the books are upside down from each other is a bit of a weird setup.  It works; it's just a bit disorienting.  The two books in this particular volume, Sinister House, by Leland Hall and Cold Harbour, by Francis Brett Young, are from a series by Hippocampus Press called "Lovecraft's Library" which features nine volumes -- three doubles, like this one, and six novels -- all of which, according to the Hippocampus website, offers "the modern reader a selection of works that Lovecraft himself read and admired, and that he commented upon in his letters or elsewhere."   This is my first foray into the series, and it was a bit of spooky, creepy fun -- best suited for reading after dark or during a night when you're all tucked up in bed and thunder, lightning and rain are all rampaging outside.

Up first is Cold Harbour, by Francis Brett Young.  Originally published in 1924, most of this haunted-house story takes place in the West Midlands area of England.  As the story opens, a group of friends are together on a terrace somewhere on the Italian Island of Capri. While they are enjoying the night, two of the guests, Ronald and Evelyn Wake, reveal their strange adventures at an old house in England's Black Country, keeping their friends spellbound with their eerie tale.

The Wakes are on their way home from a short vacation and while in the Black Country, in the middle of a thunderstorm something goes wrong with their car and they find refuge at a nearby inn.  While they are there, Evelyn is waiting for Ronald to do some repairs, and she meets Mr. Humphrey Furnival, owner of a house called Cold Harbour.  He makes note of some writings he owns from one of Evelyn's favorite poets, long forgotten now, and invites her to come see them for herself.  Evelyn senses that something is not quite right about Mr. Furnival, and she and Ron really should be getting back home, but the two decide to visit the house on the following day.

During their visit to the house, Ron is taken around the place by their host.  He is shown Furnival's library which comprises many volumes on witchcraft as well as research into madness; he also has quite a collection of artifacts dating back to the Romans he's dug up around the grounds of the house.  One of his prize possessions is a dagger that he discovered was  used in sacrificial worship of the goddess Astarte. As Wake gets the tour and his uneasiness and fear grows,  Evelyn is left with Mrs. Furnival.  Evelyn's time is spent listening to the woman talking about all of the eerie occurrences that she, her children, visitors and the servants have all experienced since they came to Cold Harbour.  Ghostly screams, a poltergeist, manifestations of blood and other phenomena are all part of her story, as well as the revelation that Mr. Furnival considers his wife to be delusional.   As the last vicar left in fear of his very soul, Mrs. Furnival turned to Catholicism, building a small altar and retreating to it as her only source of peace in this house of torments.  It isn't long until the Wakes have had enough and take their leave, but they do so with the  feeling that "they’d been thrust out of their normal, peaceful orbit by a blow from something dark and invisible whirling out of space.”

An old-fashioned and atmospheric haunted house story with a chilling twist,  Cold Harbour might seem pretty tame to today's horror readers who thrive on gore and grossouts, but for an old-fashioned tale of hauntings, it's pretty scary -- especially when all is finally revealed.

Coming now to Leland Hall's Sinister House,  this book is another haunted house story, which takes place in an old house on a cliff.   Published originally in 1919, it is the story of two young newlyweds who have come to live in the Hudson Valley.  Rather than follow the lead of their very good friends  Pierre and Annette Smith who have settled nearby in a more modern housing development built especially for commuters,  Eric and Julia Grier decide to take residence in an eerie old house in the woods that stands on a cliffside.  Eric has to commute for work; when he is away he can't stand being apart from his wife; while she misses him when he's gone, she is more worried about him returning.  It isn't long until Pierre realizes what's going on -- there's some sort of force within the house that wants to separate Pierre from anyone who cares about him, making them feel uneasy in his presence, and this includes his wife Julia and his friends.  Pierre's little son is hypersensitive to these haunted goings-on, so much so that  before long Pierre must tell Eric he can no longer come to the Smith's home.    But there's more to this presence than just its isolation of Eric -- and soon Julia realizes that her very life is in danger.

Sinister House has it all -- a creepy old house with a locked room where no one dares to go, dark woods that hide it from the outside, and an ongoing sense of impending doom that creeps under your skin.  It also holds a core mystery centering on the nature of the evil forces that inhabit the house as well as a truly horrifying story that unfolds after all is revealed, one that will chill you to the bone.  At the same time, the book is also a product of its times --  while the author is great at building and maintaining a chilling atmosphere, sometimes the story heads off in a direction reminiscent of a romantic melodrama.   There are also a few issues about his ghosts that make no sense if spirits are the ethereal creatures they're supposed to be -- can ghosts really trip and stumble over each other?

In spite of a few misses, Sinister House is a fun read; together with Cold Harbour there are a few hours of hair-raising entertainment to be found.  If I had it to do all over again I'd save both stories for the quiet and the darkness of night -- the chills would be a lot more effective.  If you're into old ghostly tales that depend heavily on atmosphere, you'll like this book; if that's not your thing and you prefer brain-eating zombies or other more in-your-face kind of horror, you'll definitely want to pass.  I liked it, but I'm much more into creating scary scenes in my head than having them already splashed all over the pages with not much left to the imagination.
Posted by NancyO at 9:38 AM