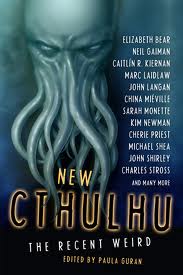 "...I figure there's things I don't want to find out about. And if we go looking down there, we'll see things we don't want to know about."

In the introduction to this book, the editor quotes a statement from China Miéville's intro to Lovecraft's  The Mountains of Madness: The Definitive Edition, where he notes the following:

"Traditional genre horror is concerned with the irruption of dreadful forces into a comforting status quo -- one which the protagonist scrambles to preserve. By contrast, Lovecraft's horror is not one of intrusion, but of realization.  The world has always been impeccably bleak; the horror lies in us acknowledging the fact."


And for the most part, that's a great way to describe what's happening in most of the stories in this book, which I'd rate as an above-average collection of cosmic horror tales.  Some of the stories are very much geared toward true Lovecraft fans, while some are tinged with eldritch horror and updated for the modern reader.   There are others that are not as creepy and some that tend toward the humorous.  As I've noted previously, the problem with these sorts of anthologies is that sometimes you read through a number of stories and when all is said and done, there are a few really good ones that stand above the rest, leaving you with some that are okay, and some that you just plain don't like.  That also happens in this book.

There are some really good ones in here; the ones I like best include Cherie Priest's "Bad Sushi," about an 80 year-old sushi chef who susses out a bad smell and other horrors;   John Shirley's "Buried in the Sky" is also very well done, with appeal not only to the classic Lovecraft fan, but also to more modern readers of the weird.   "Take Me to the River," by Paul McAuley is set in Bristol, and is delightfully eerie; by far one of the more cerebrally-creepy stories comes from China Miéville in "Details," the story of a young boy who gets caught up in the madness of a woman who will not come out of her room.   I also had fun with "A Colder War," by Charles Stross, where the discoveries made in Antarctica in Lovecraft's "At the Mountains of Madness" become the ultimate war technology.   "The Oram County Whoosit," by Steve Duffy is also deliciously creepy, a story that takes the reader back to the gold rush days and should teach you not to play with things that are better left alone.  Michael Shea's "Tsathoggua" and Caitlin R. Kiernan's "Pickman's Other Model" are very well done, and  I also liked Don Webb's "The Great White Bed."  Neil Gaiman's "A Study in Emerald" is also found here, a Sherlockian tale that  takes place in an alternative Victorian world.  And although I liked Langan's "Mr. Gaunt," it seemed a bit out of place in the context of this collection.

There are other good ones as well, but there are also some that I could take or leave, among them "The Vicar of R'lyeh," which others will probably love due to its gamer setting; I wasn't all that impressed with Kim Newman's "Another Fish Story" where the Devil meets Charlie Manson and his family, and "Mongoose," by Elizabeth Bear and Sarah Monette didn't do anything for me either.

It's your usual collection of  yeah!, okay, and no; but within the first two categories, you will find hours of creepy entertainment. If you are a Lovecraft purist, I'd stick with the older stuff, but there is enough cosmic horror and modern weird in here for everyone else.  My overall assessment of this book is that it is really good, not great, but as good as you can hope for in such a wide range of authors and stories.
Posted by NancyO at 10:27 AM