brain break: The People of the Pit and Other Early Horrors from the Munsey Pulps, (ed). Gene Christie 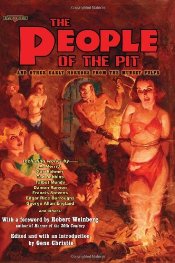 If you're reading this book on an airplane, prepare to be stared at as people go down the aisle and check out what you're reading.   The scantily-dressed women (and the two naked babes in the background) certainly drew attention from passers-by, and I felt a bit squirmy when I'd meet people's eyes.  How do you explain a cover like that?  On the other hand, I love love love these old covers  --they're an art form unto themselves and should be appreciated as such.

The first thing that caught my eye was the foreword by Robert Weinberg. In it he notes that the old pulps were written with "a modicum of "good taste" as contrasted to some of today's modern horror, most notably splatterpunk, which "murders good taste."  I agree -- when writers write mainly for effect, to see how much "blood and guts and brains and gore" they can get on a page, well, to me that's just tasteless. Try writing.  Not that these old pulps are great literature, but like good horror, in most of these tales, the horror is implied. That's another point Weinberg makes -- that


"The pulp horror stories require that the the reader possesses some smatterings of intelligence. The tale assumes that you can follow a plot and don't need to be force fed every clue or every twist and turn of the story."

Oh, Robert Weinberg, your entire foreword is singing my song.

There are fifteen stories in this little book, some of which I've read before:
-- "The People of the Pit," by A. Merritt,
-- "The Orchid Horror," by John Blunt (which I read in Robert Dunbar's wonderful anthology Dark Forest)
--  "The Ship of Silent Men," by a most obscure pulp writer Philip M. Fisher, whose collection of tales can be found in Beyond the Pole and Other Weird Fantasies (also published by Black Dog)

and beyond those little gems, the rest are new to me:
-- "Behind the Curtain," by Francis Stevens:   Mummy pulp
-- "Number Thirteen" (excerpt), by Edgar Rice Burroughs, which I must say I did not care for at all, but I can't win them all.
-- "The Tenth Question," by George Allan England:  a tale of revenge where a man's life depends on getting the right answer to question number 10.   Delightfully strange.
--"Disappointment," by Achmed Abdullah: More atmospheric than anything, but still quite pleasing.
--"The Pretty Woman," by Owen Oliver:  I love a good madness tale, and this is one of the best.
-- "The Living Portrait," by Tod Robbins:  Exactly as the title implies.
--"An Offer of Two to One," by Talbot Mundy:  auto-suggestion at work -- great story.
--"Beyond the Violet," by J.U. Geisy: the war leaves a man able to see well beyond the normal spectrum, and you just wouldn't believe what's out there.
--"The Elixir of Life," by C. Langton Clarke -- another absolute stunner.
-- "The Mystery of the Shriveled Hand," by Sax Rohmer -- set in Cairo, another cool tale of justifiable revenge.
-- Damon Runyon's very well-known "Fear", in which a police chief gets his comeuppance.  Very Damon Runyon.

and last, but by no means least,

--"Monsieur de Guise," by Perley Poore Sheehan (whose name just screams "I write pulp fiction"), which takes place down in the swamp. The atmosphere on this one alone makes it very much worth the read.

For just pure entertainment, this book is worth its weight in gold, and having the names of several new and (to me) obscure authors to look up is a side benefit. Many of the stories here are seeing their first time in reprint since the days of the old pulp mags; some are definitely what I would consider horror; some others are more of a mystery-ish bent, but all (with the exception of the entry by Edgar Rice Burroughs) are just plain fun.  It's an ahhh read, comfort food between two covers, and for fans, a very, very nice collection.  Just put a brown cover over it or something out in public.