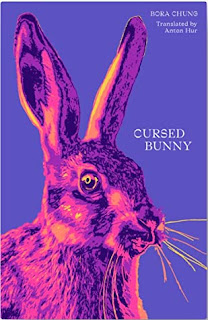 9781916277182
Honford Star, 2021
translated by Anton Hur
247 pp
paperback
I will just get this out of the way up front: I loved this book from the first story on down through the last, at which point I was so sorry that it was over.    I hadn't read any reviews of Cursed Bunny before reading it, so I had absolutely no idea what to expect when I bought the book last year.  Just a short while ago the nominees for the Booker International longlist were announced, and when I saw Cursed Bunny on that list, I grabbed it off my shelf, read it and fell in love.  It is the kind of book that once read stays with you for the longest time.    And let me say this up front as well -- Anton Hur did an incredible job translating Chung's work.  Not that I read Korean,  but I do know a great translation when I see one.
The cover blurb reveals that the author

"uses elements of the fantastic and surreal to address the very real horrors and cruelties of patriarchy and capitalism in modern society,"

which is true, but these stories also take a look at the close connection between power, abuse and subjugation in many forms.

Cursed Bunny, as also noted on the blurb, moves through and incorporates a range of different genres, "blurring the lines between magical realism, horror, and science fiction."  There is also more than a touch of dark humor at work here as well.   After a while, it starts to dawn on you that the characters in all of these stories seem to accept the strangeness or the absurdities of events happening in their respective, various worlds as just part of ordinary life, a factor that makes each and every story work and work well.   For example, in the first story, "The Head," there seems to be nothing at all remarkable about "a thing that looked vaguely like a head" speaking to a woman from inside of her toilet bowl, responding to her questions, with the rest of her family telling her to "just leave it alone" since "it's not like it's laying eggs or anything."   Then there's "The Embodiment," in which a young woman discovers she's six weeks pregnant from taking birth control pills longer than the doctor had prescribed.  One major theme of this story jumps right out at you from the start, when the doctor ask her about the baby's father and learns there is no one, and then tells her that she'd better "hurry up and find a man" who's willing to step into the role, or else the consequences will be dire.    In  "Cursed Bunny," a grandfather relates "the same story he's already told me time and time again" about his friend who had  "lost everything" after another brewery owner started a vicious "slander  campaign"  to eliminate his competition.  Grandfather was incensed, saying that

"... for the alleged crimes of not being connected to powerful people, for not having the capital to make such connections, an entire family was smashed to pieces and its remains scattered to the winds... How can such things be allowed?"

But Grandfather has a plan to get even, and it's a good one, putting to good use his skill in the family's "line of work: the creation of cursed fetishes."   These first three stories not only set the tone for what's about to come next, but also impart to the reader a very physical sense of uneasiness and downright unstoppable dread that lingers through the last page.

I won't go through each and every story because (as I'm so fond of saying), Cursed Bunny  is a book that really needs to be experienced firsthand and to give too much away would be a crime.  To mention just a few of my favorites,  "Snare" is an incredibly clever  take on the story of the goose that laid the golden eggs, moving well past the obvious theme of greed into family trauma. "Scars" has an almost  mythological feel to it, mingled with pure horror.  It starts with a young boy being  "dragged" into a dark  mountain cave  by men he didn't know while out "roaming the fields" one day and chained up.  He's not always alone --  once a month he is visited by "It," which "pierced his bones, and sucked at his marrow."  Years later, the boy manages to escape but because of the scars on his body, is treated like the monster he's fled from.   The worst though is yet to come, when he discovers the truth about why he was left there in the first place.   "Reunion," is one of the saddest, most poignant stories in this book,  and starts out by telling us that it is a "love story for you."  A young woman in Poland doing academic research meets a stranger one day in a plaza who tells her in his own language that he has been waiting for her and that he knew she would come.  It turns out they share something in common. Years later, she returns and meets him again, this time going with him to his apartment where he asks her to do him a certain favor before telling her about his life.  It is a beautiful story, the perfect ending for this book; I would also argue that it puts what came before into much clearer perspective.  As the woman realizes after listening to him,

"once you experience a terrible trauma and understand the world from an extreme perspective, it is difficult to overcome this perspective. Because your very survival depends on it."

Without saying any more about it, "Reunion" is one of the best modern-day ghost stories I've ever read, for a number of reasons.
Cursed Bunny is definitely not for the squeamish, and won't be for everyone since there is plenty of horror and plenty of trauma to be experienced here, but  I have to say that while I found myself squirming any number of times, neither the violence nor the horror in this book can be labeled as gratuitous in any fashion.  This is an example of quality work that doesn't let up, and sometimes some of the worst anxieties or experiences that people must endure lend themselves to using horror/dark fiction as the perfect vehicles for relating them to others.   In writing her stories this way,  the author also forces the reader sit up and take notice of what's going on around them.  As noted in an article in The Korean Times, the "inexplicably frightening and bizarre elements" she uses "remind the audience of the very real horror and cruelty that exists in the world."  These stories are enigmatic and most certainly require concentration from the reader, but I'm used to that element being part and parcel of reading weird fiction so there was no problem there.  Cursed Bunny is also beautifully and intelligently written, its pull so intense that I didn't ever want to put it down.
Highly recommended times infinity -- it's insanely good
************************
If you would like a very brief rundown on all of the stories in Cursed Bunny, you can find them here in translator  Anton Hur's "cover letter" to PEN/Heim which contains  the "outline and significance" for this book; or you can skip it until after you're read Cursed Bunny, which is what I did.
Posted by NancyO at 11:08 AM