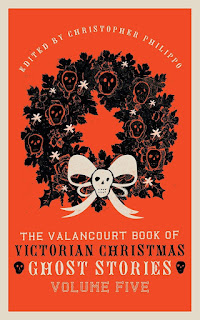 9781954321540
Valancourt Books, 2021
257 pp
hardcover
"The Christmas Party that has just listened to a ghost story would rather go on all night, drinking in fresh horrors, than separate to their cold and gloomy chambers."
I would happily reinstate this Victorian Christmas tradition if I thought that anyone in my family would love it as much as I do, but I'm quite content to settle for just reading these old ghost stories each year on my own.  After all, as we're told in this book,

"The telling of ghost-stories, no less than the eating of turkey and plum pudding, is inseparably connected with Christmas in the popular idea!"

For the last five years, at least, it's just not been Christmas anymore without taking my copy of the latest of edition of Valancourt's Victorian Christmas Ghost Stories off of its shelf, and as long as they keep publishing them, I'll keep buying them.   While it's true that I have a deep fondness for ghost stories in general, what I really love about these anthologies is that I always find a few stories by authors previously unknown to me.   This year that list is nice and long -- leaving out the poems, and the one story attributed to Anonymous,  out of the remaining sixteen tales editor Christopher Philippo has selected for inclusion, there are a whopping ten (with one of these having two stories here) who are brand new to me.   That's always a bonus.
One of those ten is Mabel Collins, whose short bio blurb reveals that she had "learned of Helena Blavatsky's occult Theosophy religion in 1881," meeting her in 1884.  In 1885, she had published a book she'd begun the year before, The Light on the Path, claiming that it had been "dictated to her by some mystic source".  A little digging reveals that this "mystic source" was the Master Hilarion, who had himself "received it from his own teacher, the Great One who among Theosophical students is sometimes called 'The Venetian.' "  Philippo notes that The Light on the Path had been "written in an astral cipher, and can therefore only be deciphered by one who reads astrally."  It's easy to see some of her beliefs embedded in her story included in this volume,  "A Tale of Mystery," in which a young man becomes beyond infatuated with a woman, leaving his friend in despair because he is absolutely certain that this woman wants to lead said young man "to his destruction."  Evidently his "suffering" has been transmitted far and wide across the spiritual plane, as he receives some help with his problem from a strange and completely unexpected source.   Another  story by a previously-unknown-to-me author is "The Siren," by Thomas Grindley, whose pen name for this piece was Magister Monensis.  Subtitled "An Adventure in Manxland," offering the clue that the location for this tale is the Isle of Man.  It seems that just before Christmas, a man who lived with his wife a few miles south of the town of Ramsey had received a telegram causing him to leave home to be with his parents due to an accident suffered by his father.  On the return journey,  along the way he finds himself in a "miserable position" in the middle of a violent storm complete with fog, and is forced to stop in the village of Old Laxley with five or six miles of "exposed road" still to travel in the darkness.  Because of an "overpowering longing to get home,"   he leaves his exhausted horse with an innkeeper and sets off on foot, with only a lantern to light his way.   During a short rest break, his attention is "suddenly arrested" by a faint sound, much like a "woman in deep distress," and he goes in search of its source.   I'll say no more, but thinking the title is a dead giveaway, I thought I'd figured out what would happen next.  I was so wrong.
Every so often you run across fun little things the editor has unearthed in his research, for example, this article from the December 5th, 1907 edition of The Daily Mirror 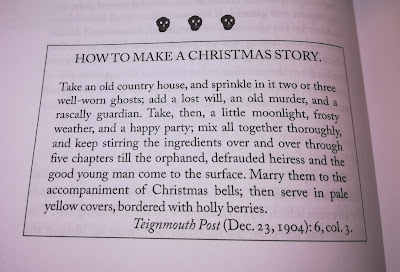 this recipe for "how to make a Christmas story."  I love this stuff.
For the sake of brevity, and although I didn't encounter a story I didn't like,  I'll offer just one more example, this time from someone whose work I know -- Barry Pain's "The Undying Thing,"  a story which, as the editor quotes one contemporary reviewer,  "no one should tackle after eating a plum pudding."   This story moves across generations, starting with a murder, a remarriage, a child, and a curse on the family lineage.  The sixth baronet of the Vanquerest family, Sir Edric,  "a fine young fellow and popular in the village," does his best to stop the village gossip about a certain spot called Hal's Planting, "said to be haunted by something that will not die" by sleeping there, but to no avail; evidently an ages-old curse and a legend are hot topics of conversation at the Stag.  One day, while the current Sir Edric is away from home, his friend gets word of a corpse found at Hal's Planting, and even worse, in sorting through some papers he discovers a parchment having to do with "the devil's wolves" and something far worse, far more malevolent.  Shivers.
I wish I had time to talk about each and every story in this book, but suffice it to say I had a great time reading all of them.  Once again Christopher Philippo has done an excellent job not only finding the material but also in writing his brief introductions to each and every story.  I will also say that while it's a fun book to read over the holidays, it would be a fine read at any time of the year for those people who, like me, love these older ghostly tales.
Now I'm already looking forward to volume six ...
Posted by NancyO at 1:32 PM