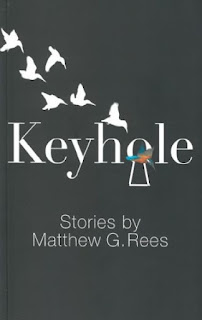 True as that statement might be, the visions offered of Wales here capture the seasons, the weather, the people and the landscape; it is a place where time gone by bleeds into the present and quite often magic presents itself in many different forms.    In that same interview, the author says that his intention is that the reader "always keep one foot in our own recognisable world,"  while "tentatively stepping into another, adjoining world."  No disappointments here at all.   As with any other collection of stories, there are some that range from the great zone and move on down, but there is not one in the bunch that I didn't like; among the darkest of these you will also find some that will bring on a bit of a chuckle.   An absolutely wonderful collection of stories that I enjoyed so much that I bought another book by the same author just a few stories into this one.
With only a few minor exceptions, I've had a fantastic weird reading year, and Keyhole just made it better.  Considering I'd never heard of this author before Halloween, well, that tells you what you need to know.
Posted by NancyO at 12:46 PM