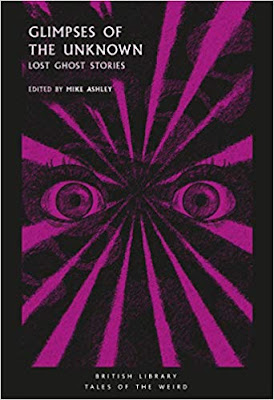 "It's a terrible thing to meddle with the Powers of Darkness..."
from "The House of the Black Evil," 285.


The British Library has once again thrown temptation in my path, and I was completely unable to resist.  We're talking not just one book, but five that I've picked up (or preordered) in a new series of books, British Library Tales of the Weird.   I passed on one, Haunted Houses: Two Novels by Charlotte Riddell, only because I think I already have most of her supernatural writings as collected and published by Leonaur.    The other books in this series (that I know of) aside from this one are

From the Depths and Other Strange Tales of the Sea (ed.) Mike Ashley

and judging by what I've found here in this volume, hopefully there will be more forthcoming.

What really makes Glimpses of the Unknown most readworthy is the fact that the stories in this book have not previously been reprinted so they're here in all their obscure glory.  They range over time from the 1890s to 1929, and while Ashley admits that "not all of them evoke horror or fear," he also says that

"...a ghost story can work on several levels ranging from the unnerving tingle of the unknown, to that hauntingly evocative atmosphere of something strange or uncertain."

which is absolutely the case, at least for me.   There are eighteen stories to be found here that include, as the editor also states, "the whole spectrum of the supernatural."  As with most anthologies, enjoyment (and creepiness) is found in the eye of the beholder, but it is worthy of attention from even the most seasoned readers of ghost stories.    My personal favorite, which stands on its own in its greatness is "The House of the Black Evil" written by a most obscure author by the name of Eric Purves.  Ashley notes in his brief introduction to this story,


"When John Reed Wade, the editor of Pearson's Magazine, ran the following story in the May 1929 issue, he announced it as 'One of the most original mystery stories ever written."

Wade was so taken with it, in fact, that the opening scene from "House of the Black Evil" was captured by Kenneth Inns as that issue's cover:

depicting the "horror-stricken" postman looking into the mail slot in the door of "that dismal and forbidding house."   From there (don't worry, no spoilers here), he summons help from the person who will turn out to be the narrator, who lives on the opposite side of the square.  What they discover is the meat and bones of this story,  so exquisitely unraveled little by little so that the full force of the horror is delivered only toward the end.  Purves may have been unknown, but this story deserves to be in the hands of supernatural readers everywhere.

The complete table of contents (briefly annotated, no spoilers, but skip if you don't want to know):

1. "On the Embankment" by Hugh Esterel Wright,  1919: A perfect opener for this collection which begins with the description of a certain "peculiarity" of a certain seat: "no matter at what time of night you pass it, no matter how crowded with dilapidated humanity the seats next to it may be, that seat is always empty."   Why is that, you might ask, but far be it from me to answer.

2. "The Mystery of the Gables" by Elsie Norris, 1908:  Once again we find grown men wagering that one of them wouldn't have the courage to stay overnight in a haunted house, and of course, one does.

3. "The Missing Word" by Austin Philips, 1907:  It is a dark and stormy night and a dozen "telegraphists" are waiting to spread word of the news of the dying Prime Minister's actual death. To pass the time, they regale each other with "tales of crime and horror." As it turns out, one of them has a real tale of terror to tell.    The end of this one is a sort of letdown after all of the buildup and a bit predictable.   By the way, Philips was the son-in-law of writer Edith Nesbit, who had encouraged him to sell his stories to The Strand.  Memo to self -- find his crime novels.

4. "Phantom Death" by Huan Mee, 1900:  another good one, which begins with the viewing of a certain painting that "must be viewed in solitude and amid funereal environment." In the dark room ("death-like chamber") of the Mecklenburg Gallery which houses the painting, one man finds his  solitude interrupted by another, setting off a truly weird sequence of events.

5. "The Wraith of the Rapier"  by Firth Scott, 1911:  an antiques dealer sells an old Spanish rapier to a collector for a mere pittance -- its new owner discovers why once he takes possession.   This one is downright creepy.

6. "The Soul of Maddalina Tonelli," by James Barr, 1909:  Belissima.  Another fine story discovered by Ashley,  featuring a violinist who, while playing in a concert, notices a beautiful woman in the audience giving him special attention.  It seems that no one else can see her but it doesn't matter: she has a message for this man and for him alone.   If you can get past the more melodramatic elements, it's a lovely but eerie story.

7.  "Haunted," by Jack Edwards, 1910.  Another one of my personal favorites, centering around an artist whose initial description is given as having " the face of a man who had begun to be afraid."  As it turns out he has good reason, eventually reaching the point where he seeks company from another because he is too frightened to be alone in his own home.  So very, very well done.

8. "Our Strange Traveller" by Percy James Brebner, 1911:  Another good one, this one set in the North of France.  A walking tour taken by two friends turns into something completely unexpected and wholly terrifying.

9. "A Regent of Love Rhymes," by Guy Thorne, 1905:  Not so hot on this one, exactly -- pretty standard ghostly fare about a writer whose major writing is on the edge of being finished when calamity strikes.

10. "Amid the Trees," by Francis Xavier, 1911:  Portugal is the setting for this one as a traveler on holiday with a desire to "simply and tranquilly ...thoroughly enjoy the country and the day" encounters a "strange, moving fragrance" in the air during a long walk.  He finds himself succumbing to its spell, and begins thinking of how much he wants a woman, believing that amid the trees is the perfect place to find one.  Actually, this one is more sad; a wee bit overwritten but still pretty good.

11.  "The River's Edge" by Mary Schultze, 1912:  the less said about this one the better -- to describe it is to give it away completely, although I will say that it was more than a bit predictable.

12.  "A Futile Ghost," by Mary Reynolds,  1899:  A strange story, to say the least, in which the spectre of a veiled woman makes itself known to two sisters (one married, one engaged)  living in the same home.  The force of this particular story doesn't quite make itself known until the very end, which I had to read twice to understand.

13. "Ghosts," by Lumley Deakin, 1914:  Quite honestly, and with apologies, I have no idea why this story was even included here.  a) it wasn't that good and b) I'm still wondering if it's actually a ghost story or if there was some jiggery-pokery going on in terms of a setup of some sort between two of the characters.  Read it and decide for yourself.

14. "Kearney," by Elizabeth Jordan, 1917:  The aftermath of a terrible accident makes an army officer wonder if his companion has actually been laid to rest after his death.  A wee bit sappy and sentimental for my taste; on the other hand, there's a certain obsessional ambiguity to it that kept me compelled.

15. "When Spirits Steal" by Philippa Forest, 1920:  After finishing this one, my first thought was to wonder why nobody has collected her stories featuring Peter Carwell and his companion Wilton.  Granted there are only four of them, this one included, but "When Spirits Steal" was such a fun and different type of ghostly tale that I wanted more.  Another one where even a slight bit of information is too much, but thoroughly enjoyable.

16. "The House of the Black Evil" mentioned earlier, but I'll add that in my opinion, the sheer originality of this story, "the tale itself was weird beyond imagining," offset the entire cost of the book.

18. "The Treasure of the Tombs," by F. Britten Austin, 1921:  Ashley describes this story as seeming "ideally suited to Indiana Jones."  Yes and no.  What caught my eye and what drew me to this story was its sweet blend of supernatural force meets pure unadulterated pulp, which okay, does sound a bit like Indiana Jones, but there's much more to it, including veiled warnings against sheer greed.  This one was just plain fun; a delightful inclusion that made my pulp-loving heart go pitter-pat.

Obviously, it's a mixed bag and I have my own internal thing going where ghost stories are concerned so it's one that readers will want to try for themselves.  However, the joy is in the discovery of these previously unread stories, so Mike Ashley and the British Library have made me a very happy reader.   Definitely recommended for serious lovers and readers of ghost stories.