Exemplary Departures, by Gabrielle Wittkop, to close out 2018 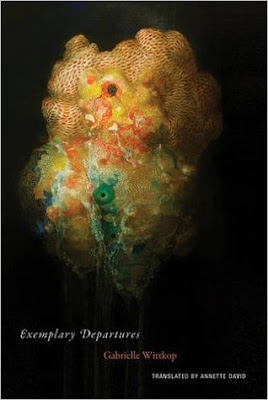 In the translator's postscript, Annette David says of this book that here


"we have at least five spectacular -- contingent or planned -- ways to make one's exit from the world of the living."

It sounds bizarre to say this, but Exemplary Departures, even with its focus on death, is a beautiful book, one that should not be missed by readers of dark fiction, especially in the macabre zone,  who appreciate superb writing.  Wittkop, again quoting from the translator, was

"drawn to the realm of a decadent romantisme noir of previous centuries, and to writers of a scandalous reputation,"

including Poe, de Sade, Lautréamont, Mandiargues and Huysmans.  The back-cover blurb also reveals that she


"spins these tales with her trademark macabre elegance and chilling humor, maneuvering in an uncertain space between dark Romanticism, Gothic Expressionism, and Sadistic cruelty."

While most of these stories carry a streak of cruelty, there is a touch of dark humor to be found in them, as well as a sadness that permeates each one to the point where it's difficult not to engage in a certain amount of empathy for her subjects, four of which were real people who met with strange, untimely ends.  One of these, while never named, will be clearly and instantly recognizable once the story starts and the literary and biographical references start flying. I won't spoil it for you, but it is one of the best stories in this book although I truly enjoyed them all.

Five "exemplary departures" are found here, and so as not to spoil things and leave the pleasure of discovery to other readers, I won't say too much about them.  First up is "Mr. T's Last Secrets," based on the real-life Jim Thompson (not the author), once known as "the most famous American in Asia,"

also known as the "Thai Silk King," who simply vanished in 1967, leaving behind "his cigarettes and above all his pillbox..."   In the search for Thompson,  "soothsayers, clairvoyants, bomohs, Buddist Ascetics, sorcerers, and charlatans" all had an opinion as to where he might be, but I will say that none of them could have ever guessed what had happened to him in Wittkop's reimagining of his disappearance.   A much more stunning story is told in "Idalia on the Tower," set in the Rhineland of Germany in 1851.   I knew this one was going to be great right away since it started with an old legend involving an invocation made by Scots "when caught up in a catastrophe," before proceeding to whet the appetite with a hint of the


"catastrophic situation that  that Miss Idalia Dubb at the age of seventeen finds herself in, her agony and her death, would also be self-provoked, by her little foot in its fine ankle boot as well as by tacit betrayal."

"Idalia on the Tower" is just sheer writing excellence, in my humble opinion.  It also led me to buy another book, which purports to be based on the diaries left behind by the real life Idilia (not a typo) supposedly cobbled together while she awaited her fate: The Diary of Miss Idilia by Genevieve Hill, one of the real Idalia/Idilia's best friends.    Next comes "Baltimore Nights," concerning the unnamed main character of this tale.  Not only is it another piece of outstanding writing,  but Wittkop prolongs this person's suffering as she reveals his slide into complete, utter, hallucinatory madness.  Oh my god. It's like I wanted it to stop but couldn't help but turn the pages.

A bit of a reader jolt occurs  in the next story as we're taken from nineteenth-century Baltimore to a modern-day New York City in "The Descent."  The title is sort of a double entendre, although I won't explain why here.  Knowing that four of these tales were based on real-life people, prior to reading this story I spent way too much time online looking for the name Seymour M. Kenneth; it was only after I'd finished the book and read the translator's postscript that I discovered the following:

"Whether there is a precise actual basis to this story remains obscure. One can only guess that Wittkop perhaps came upon Seymour Kenneth's name on some missing persons list."

What a great idea (if true) to go along with a truly great story  This may just be the most cruel story in the entire collection, another one where when you think it can't possibly get any worse it actually does.  If you've read Hoffman, you'll catch the reference here, as Seymour makes his way from a "distraught" mama's boy to willing partner (read slave) of a woman, Emily,  he refers to as "Mammily," to a place where


"eternal Mothers who rumble in the lava, of jealous fairies who, like the one in Falun, live at the bottom of mines."

The cruelty at the heart of this story is just heartbreaking, but it exemplifies that old cliché about knowing you're about to witness a trainwreck but you can't look away.  I actually had to put the book down at this point because I was afraid of what Wittkop would next pull out of her hat, although  the fnal story, "Claude and Hippolyte or The Inadmissible Tale of the Turquoise Fire," while strange (in a good way) was not thankfully nearly as gut wrenching.  The Countess Marguerite de Saint-Effory gives birth to twins in 1724, of whom


"No single sex dominated the other and herein resided the unique phenomenon of this perfect completeness, the one that according to Gnostic legends and the science of alchemy represents the hermaphrodite."

She revels in the fact that they are "freaks of nature," filling her with a "pride she was at pains to keep secret."  Inseparable, with a life that might have been envied by other children at the time,


"Handsome in the way of statues, the twins would nevertheless rejoin the dark subterreanean world of roots and blind larvae in the alluvial soil"

with their journey to their departure the subject of this tale.

The literary references at work here range from Goethe to Hoffman to Poe to Kubin (and much more) on down to Somerset Maugham, so as you might imagine, there is great depth in Wittkop's writing.  Exemplary Departures  not only encompasses a macabre, often surrealistic look at death but also offers a look at human minds spiraling down into the darkest depths possible.  This is my first book by this author, but I have two others on the shelf,  The Necrophiliac and Murder Most Serene, that I'm now eagerly looking forward to reading.   If it's excellence in writing you're looking for, you will most certainly find it here.