This is a good one: Number Seven Queer Street, by Margery Lawrence 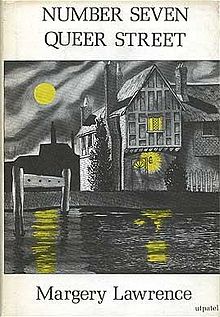 
"People do generally come to me as a last hope!"


There's nothing like getting to the end of a book only to discover that it's an abridged edition, which is exactly what happened to me with this one.  First panic set in, and then I got busy trying to find the remaining two stories that had come with the 1945 original.  After a little sleuthing, I found a modern edition so I could finish the book as it was intended to be read.

It's a bit confusing, actually, since in the 1945 original shown on the right (Robert Hale), there are seven stories; in the 1969 edition I have there are five, and in the Ash-Tree Press kindle version,  Ash-Tree Press Occult Detectives Volume Two: The First Casebook of Miles Pennoyer, there are six.   Luckily between the Mycroft and Moran edition and the Ash-Tree Press edition, I managed to read them all.  There is yet another edition of four later stories featuring Miles Pennoyer, Master of Shadows (1959) that to my knowledge has not been reprinted since it was published, and according to Biblio.com, there was a twelfth Pennoyer story published after the author's death.   I'm really hoping that Ash-Tree decides to publish (as promised at the end of the Kindle version of Volume 1),  The Second Casebook of Miles Pennoyer, which the blurb says "will be available soon."    Not soon enough for me -- even though these stories can definitely become a bit long winded at times, as the author starts to hone in on the actual problems solved by the "psychic doctor" and their cures, it's eyes on the page without budging an inch.


In the foreword which is given by Jerome Latimer, the fictional pupil, assistant, and chronicler of  the exploits of  Miles Pennoyer, we are given a clue as to the author's influences in writing this book:


"There are not many people who are fortunate enough to know these selfless and splendid people, the psychic doctors -- and there are still fewer books that record the wonders they can do and are still doing.  Algernon Blackwood's book John Silence was one of the first, and Dion Fortune's book The Secrets of Dr. Taverner is another..."

The title of the book comes from Pennoyer's address, No. 7 Queer Street, where Pennoyer lives with his housekeeper Friedl and his dog Hans; it is a "top-floor eyrie" perfectly suited to his need to be alone, without "too close contact with the crowd."   According to Latimer, Pennoyer is  a "psychic doctor -- one who deals  in ills that beset the soul rather than the body of man;" Brian Stableford says in his entry on Margery Lawrence in St. James Guide to Horror Ghost and Gothic Writers that   Pennoyer's "ostensible purpose" is to "put an end to the supernatural disturbances by healing the experiential wounds they symbolize." (350)   Over the course of these seven stories, he arrives on the scene to try to understand what is causing someone to act the way they do, but before he can do that and effect a cure, he must get to the root of his or her psychic disturbance. Sometimes he is able to do this alone; at other times he must call on "Them," aka "the Masters" for guidance and help.

In "The Case of the Bronze Door," Pennoyer reveals to Latimer how he came to be the owner of  a certain Chinese screen, a gift from "a patient" who marriage started going very wrong once the piece was put in his study.   "The Case of the Haunted Cathedral" finds him investigating a new cathedral which is haunted by not just one, but two spirits, keeping the practitioners from wanting to worship there.  An invitation in the mail prompts Pennoyer to tell Latimer about "The Case of Ella McLeod," whose strange attachment to a stray dog and her strange knowledge of Ancient Greek gives Pennoyer his first clues as to what's going on.  And then we come to "The Case of the White Snake," which to be really honest, absolutely disturbed me at first because of the device used in this story, which honestly made me question her judgment here.  I won't go there so as not to spoil things, but even Brian Stableford notes that the symbolism was "sanitized."  Yikes.

Next is my favorite of the collection, "The Case of the Moonchild."  To bring Stableford into the discussion again, he remarks that this one was "obviously borrowed from Alistair Crowley," and it shows.  Talk about creepy! In this story, Latimer gets a call from Pennoyer to come to Exeter, where the doctor is visiting an old friend.  He asks Latimer to bring the "bogey-bag," a nickname for a bag


"filled with all sorts of oils and unguents, queer-looking metal contraptions, robes and headgear, various documents, and a book or two, packets of herbs, odd-looking amulets, all manner of things that might be needed by my colleague in his frequent battles with the Forces of the Outer Dark..."

Obviously something weird is happening where Pennoyer is, and Latimer will get his chance to discover what it is when he gets involved in the case on his arrival.

At this point, I bought the Kindle edition for the remaining two stories, "The Case of the Young Man with the Scar" and "The Case of the Leannabh Shidhe."  In the first one, Pennoyer takes on the strange case of a young fellow whose prospective father-in-law wants the boy's "trouble" to be "cleared up" before the relationship can go any further.  It seems that the young man has a strange scar that "comes and goes," one that takes on the shape of a "dull red snake curling round the arm." Possibly the most pulpish story of the seven (and to be honest, for me, the most fun because of the all of the elements involved in this tale), Pennoyer will have to depend on the word of a strange source to get to the root of the scar's random appearance.   The last story finds Pennoyer in the guise of a tutor to a child who


"had got the entire village, besides his mother and the staff of the Manor House, entirely under his thumb. They dreaded and feared without in the least knowing what they feared..."

It seems that "if Master Patrick's crossed, and especially if he's struck, something nasty'll happen to whoever touches him," reminding me so much of the boy played by Billy Mumy in that episode of  The Twilight Zone called "It's a Good Life."   The doctor and the family have to travel to Ireland to unravel this one, as it turns out, on Halloween.

On the strength of these stories I bought Margery Lawrence's Nights of the Round Table, The Terraces of Night, and The Floating Cafe. While it may not be great literature, Number Seven Queer Street is by an author whose works have been left to drift into obscurity, and that's just a shame.  I agree with  Brian Stableford, who says that "an eclectic collection of her best supernatural short stories...is long overdue."  I'd be first in line to buy it, for sure.

Recommended highly for readers of lost or forgotten authors of dark/supernatural fiction, who also don't mind the pulpy side of horror.