rats. I should have saved this book for October: The Moons At Your Door, (ed.) David Tibet 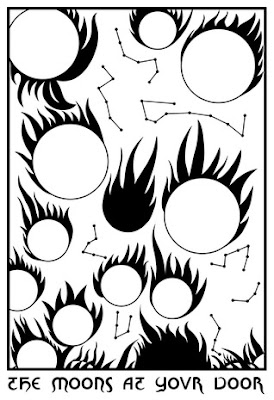 As I'm sitting here writing this, in the background I'm listening to the eerie music of Current 93's album Faust .  Had I been listening to this  when I read Count Eric Stanislaus Stenbock's tale in this book of the same name,  it would have totally heightened the creep factor that the story produced in my head.   The editor of this collection of strange, hallucinatory tales just happens to be David Tibet, the founder of Current 93, and that particular album was inspired by that particular story.

Tibet's music isn't solely limited to Stenbock as inspiration though;  it reflects at least one way in which the stories and authors in this book (and beyond) have "crept, crept, crept" into his work; in the introduction to this book he lists other music which has been inspired by Ligotti, Machen,  M.R. James and others, whose "names and phrases and worlds and dreams" he has "channeled" into what he's done.  And if Faust is any indication of how he's managed this, I need to listen to more.

Getting to the book now, it's one thing reading an anthology of strange, supernatural tales and it's quite another to read a book that serves as part of a roadmap of stories that have not only made a huge influence on someone's life, but continue to "enthral, and terrify" that person. All of these stories, he says,


"...spell how close is the darkness, how subtly and slyly it may seep into our lives and change them utterly."

"Enthral, and terrify" they did in my case, and seep into my life is an understatement in the case of some of these stories.  For example,  Stenbock's "Faust" I had to put down in the middle and continue the next day because it was so utterly terrifying;  "The Tower of Moab" by L.A. Lewis and  "The Testament of Magdalen Blair" by Aleister Crowley  took me out the comfort of my reading chair, out of my living room, and into another place entirely.  Those last two are probably imprinted on my brain forever now, and along with the two stories and two poems by Stenbock in this book, have raised the bar for what I'll be expecting from my strange/dark fiction reading from this point on.  Some of these twenty-eight stories I've read before, but I didn't care -- I got a  sense that they belonged here for some reason so I reread them with absolute pleasure.


I'll post the contents here, but I will not be going into any detail about any of them. That should be a pleasure best left to anyone reading this post.


"The Moons at My Door" by David Tibet

*"Faust," "The True Story of a Vampire," "Vol d'Amor," and "Requiem"  by Count Eric Stanislaus Stenbock

"Casting the Runes," "A School Story," and "O, Whistle and I'll Come to You My Lad" by MR James

*"He Cometh and He Passeth By" and "Look Up There!" by HR Wakefield

"The Horla" by Guy de Maupassant

"The White People," by Arthur Machen

* "The Testament of Magdalen Blair," by Aleister Crowley

"The Frolic" and "Les Fleurs," by Thomas Ligotti

"The Monkey's Paw," by WW Jacobs

"The Touch of Pan," by Algernon Blackwood

From "The King in Yellow," by R.W. Chambers

*"Levana and Our Ladies of Sorrows," by Thomas de Quincey

*From "The Thunder: Perfect Mind"

From The Epic of Gilgameš

*"Couching at the Door," by DK Broster

Rounding out the rest of this book are "Biographical and Story Notes," by Mark Valentine and "Lunar Tunes," by David Tibet.

The asterisks by a few of the story titles mark those I hadn't previously read; I'll just briefly mention a few of those here.  Some time ago I preordered (and am now anxiously awaiting) Strange Attractor's  edition of Of Kings and Things: Strange Tales and Decadent Poems by Count Eric Stanislaus Stenbock, also edited by David Tibet. Not to steal Strange Attractor's thunder, but if anyone's interested, Snuggly Books has recently published a collection of Stenbock's work called Studies of Death.   If the Stenbock entries in The Moons at Your Door are any hint of what's to come, I'll be freaked out, utterly terrified, and delighted all at the same time. HR Wakefield's two entries reminded me of MR James, perhaps not with as much depth, but both had eerie twists; Aleister Crowley's "The Testament of Magdalen Blair" chilled me to my bones with its implications.   Aickman's "Ravissante" actually woke me up one morning at 4:30 with an "aha" moment; evidently it was strange and powerful enough to have lingered on in my sleeping subconscious after reading it twice.  "Young Tambling" sent me to youtube to listen to the haunting voice of Anne Briggs;  "Couching at the Door" seems mild and even a bit silly at first but don't let it fool you: it hides a darkness that completely crept under my skin and has stayed there.

I'm now deep into a second round of Current 93's Faust and thinking how sad I am that this book is over, but fortunately all is not lost.  I have Tibet's newest collection, There is a Graveyard That Dwells in Man (also preordered) to look forward to.  I'm just sorry I didn't save The Moons At Your Door for October reading -- it would have been great to include it in the heading-to-Halloween lineup.

One more thing: yes, you may have many of these stories in various anthologies shelved in your library, but the ones you probably don't are well worth the cost of this book.  The Moons At Your Door should be a mainstay in the home libraries of any serious reader of strange/dark/supernatural fiction.