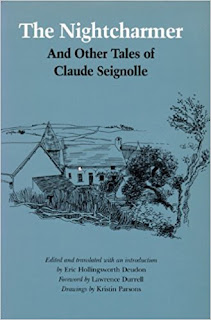 How odd that I should choose to read this book at this particular time, since 2017 marks the one-hundredth anniversary of the author's birth. Claude Seignolle was born in Périgueux, and then at the age of 12 moved with his family to Paris. Eventually he crossed paths with archaeologist  Henri (aka l'Abbe) Brueil, who stirred his interest in the past, and later he met Arnold van Gennep, an ethnologist and folklorist who would motivate both Seignolle and his brother Jacques to start collecting rural legends. His childhood had been spent listening to his grandmother recount folk tales and legends in Occitan, so it's no surprise that Seignolle chose this path. He crisscrossed the French countryside, picking up old tales wherever he went, resulting in, as Lawrence Durrell notes in his foreword,  several "huge compilations" (the titles of which, if you're interested, can be found here).   He wrote his first novel in 1945, Le Rond des sorciers, and his first short story in 1958, "Le bahut noir."  Editor Eric Deudon  tells us that Seignolle's stories contain "a whole retinue of creatures of the night," but he

"does not portray them merely as frightening characters, for the totality of these themes represents a direct transposition from his research on folklore into the literary domain."

And finally, Deudon reveals that


"Seignolle does not write gothic tales simply to intrigue, or even to terrorize, the reader. Above all, he writes in order to revive at the literary level a popular oral tradition in danger of becoming extinct."

And to me, aside from the fact that his stories are very different from standard gothic/weird/dark/horror fare, the fact that this "popular oral tradition" is on the edge of extinction should merit more publisher/English-reader interest in this man's work.  Someone should publish his books and introduce him into the world of dark fiction readers.  I know that Ex Occidente Press put out a limited edition of his The Black Cupboard, but sheesh -- a decent copy starts at $200 and I saw one on Amazon for over $800.  It's time to put this man's work into print at a price people can actually afford.


On to the book now, which was an absolute delight from beginning to end. It's once again a collection of tales that works more beneath the surface than on it, although it is also quite readable for readers who just want to be entertained by the stories. One thing I discovered here is that Seignolle is a master of irony, which adds much more dimension to his tales in a very  human sort of way and in more than one case, actually provides room for a bit of very black humor.   I can't really explain what I mean without giving things away, but trust me, you'll recognize it when you see it.

At this point, anyone contemplating reading this book who doesn't want to know anything at all about it should take the opportunity to bail. I'm going to list the stories, with minor annotations, but I will be giving neither spoilers nor great detail here, so just in case ...

The collection begins, of course, with "The Nightcharmer," from Seignolle's Les cheveaux de la nuit at autres récits cruels (1967).   Here, a man visits the home of an "eccentric zoologist" whose collection of various species of "dusty and docile fauna" takes up twenty rooms in an old manor house.  Not only is his home filled but he enjoys sharing his knowledge and memories about all things, including "the mythical creatures that the people of Brenne, dreadfully superstitious, grant to the nights there." One such legend he shares is that of the Nightcharmer.  As our visitor is about to discover, there is actually something the zoologist doesn't know.    Next comes "A Dog Story," played out in the trenches in October, 1939. As the "Khaki foxes" face "an invisible lumbering pack of green wolves" (I love the animal imagery here, and it will come back later in this book as well), back in the field kitchen, a mangy dog comes to visit the narrator and his friend.  As a dog lover myself, I'd advise a strong stomach for this one, since this is no ordinary canine. One more thing: look deep under the surface in this one and the story seriously intensifies.  From Comtes de Sologne, 1969, comes "The Healer," in which a man who takes three gold coins for each cure he provides finally meets his match in a most horrific way, as he discovers that he's "accepted a satanic proposition."  The next story, which has one of the most ironic twists I've encountered in a long while, is "Starfish," taken from "Contes Fantastiques de Bretagne" 1969.  An obviously-wealthy woman takes refuge in old villa in a "small village by the sea" that had been "deserted and abandoned." While the caretaker gets her settled, regaling her with stories from the villa's past, she's mentally elsewhere and could care less. All she can focus on is one thing... No more from me on this one, but oh, that ending!

That short tale is followed by the longest story in the book, "The Outlander," running about forty pages long, from Un Corbeau de toutes coleurs, 1962.  A stranger shows up at the local inn, pockets filled with gold, and in making smalltalk, the innkeeper manages to discover that the man is a blacksmith by trade, and that he's ready to settle down.  The innkeeper tells him that the town already has a blacksmith and that he won't get any business because everyone goes to Christophe.  As if on cue, a crowd of people burst in to inform the innkeeper and his wife that Christophe is dead.  With the widow ready to sell, the new guy sets up shop, and that is where this story really begins.  Let's just say that the original title was called "Le Diable in Sabots" and leave it at that.   From Contes Sorciers (1974), the next story is one of my favorites, precisely because of that irony I mentioned earlier.  In "The Last Rites," a cuckolded husband prays earnestly to Hubertine, the local saint of "hapless victims of unrequited love," and gets way more than he'd bargained for. Oh my gosh -- this was a good one!    Another tale that is laced with irony is "Hitching a Ride," where looking back to a time where he actually saw death,  a man remembers the day he was in a rut and decided to pick up a hitchhiker. . He lives to tell the tale, but the question here is why and how.   I couldn't help laughing out loud after reading this one; the same was true for "The Last Rites," gruesome as it was.  "Night Horses" finishes off this lovely collection, in which a traveler learns the hard way that "The night does not belong to the living" at a small inn in Brittany.  His curiosity, as well as his desire to get to his fiancée as quickly as possible,  makes him fail to heed the warning, at a huge cost.  No humor here, for sure, just good old-fashioned dark storytelling with suspense plus major jolt  at the end.

I'd love to really get deeper into this book here and dive underneath,  but as I always say, to tell is to spoil, so you're on your own.  As I said, Seignolle is well deserving of a large audience, and after finishing this book, I bought an old copy of a two-story collection of his work entitled The Accursed. The Nightcharmer and Other Tales is unique, very nicely done and is a beyond-welcome addition to my home library which seems to be taking a French turn here lately.  I can recommend it without any qualms whatsoever, although I'm sure for the splatterfest crowd this would be way too mild.  It is absolutely perfect for me though, and for those who enjoy their dark fiction more on the cerebral side, it is not to be missed.
Posted by NancyO at 12:53 PM