The Scarlet Boy, by Arthur Calder-Marshall 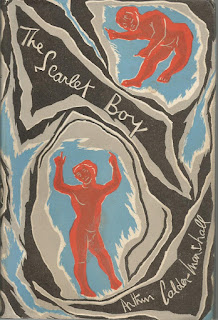 I was doing a bit of reading on the topic of British ghost stories some time ago (I forget where exactly), hoping to find more authors of such tales for my library, and I came across a reference to this book by a writer I'd never heard of.  The fact that he was unknown to me was a definite plus so I decided to take a chance and I bought the book -- and it seems that with only a few reservations, my gamble paid off.

According to George Grantley, the narrator of this tale, the story "undoubtedly" had its start on April 3, 1959.  On that day, he had received a letter from his friend Sir Christopher Everness (aka Kit), who reveals that "after years of wanderlustiness," it's time for the Everness family to settle down.  Kit is married to artist Nieves, who wants to live in Wilchester.  It seems that their eleven year-old daughter Maria hates the boarding school she goes to and so her mom wants a home near a day school.  He's also very specific about the type of house he wants -- it has to be


"the run-down shell of place that we can make over to our own idea of home...with a garden and plenty of room."

Grantley asks around and comes to learn that a certain Anglesey House is on the market. It's a house that Grantley knows well, since he had spent quite a bit of time there as a child playing with young Charles Scarlet. He also adored Charles' mother Helen -- Grantley had always "envied" Charles because Helen was "much more beautiful and gracious" than his own mom had been.  Although they were playmates, George came to realize that Charles was "obscurely vicious," often wanting the two of them to play "Tortures" in Charles' treehouse, becoming a "different person, almost as if he were possessed." Grantley was actually afraid of Charles, "too frightened by this strange creature within Charles not to do what I was told." It isn't too long into the story that we discover that Charles died later in 1916, having fallen and broken his neck; Grantley would often go and visit Helen afterwards, and their friendship lasted for well over thirty years.

There is, however, one hitch -- Anglesey House, as Grantley becomes aware, is rumored to be haunted.  While he tries to warn his friend, Kit is having none of it.  But as things turn out, perhaps he should have heeded George's advice.

While The Scarlet Boy is an unsettling, creepy ghost story and a good haunted house tale, there's a lot more going on here than just a simple haunting. Family relationships are put in the spotlight,  as is the age-old debate between faith and reason, with the narrator of this tale often changing his own ideas and beliefs as he sifts through the past to find answers.  Considering the author's background, this isn't so surprising.  According to the Oxford Dictionary of National Biography (I'll add the link, but it's a subscription-only website), Calder-Marshall leaned left in his thinking during the 1930s, but later edged toward a belief in Christianity, a move that was "underpinned by unchanging ethical concerns."

Sometimes it gets a little boggy, interrupting the flow,  but overall, it's a good read.  While I wouldn't say it's in my top ten of haunted house novels, it definitely kept me turning pages, making it one I'd recommend.   This is another book that will probably be appreciated mainly by niche readers, but I'm quite happy that it crossed my path.
Posted by NancyO at 7:39 AM