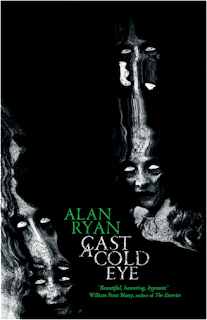 Someone should yell at the Kirkus reviewer of this novel who said it's  "A sluggish, unevocative ghost-chaser involving sanguinary rites in old Ireland...with lots of pleasant Irish ambience -- but the story doesn't add up."  Boo hiss!!  So wrong on so many levels.  Then again, a couple of weeks ago I read a Publishers' Weekly review of another book that got the details completely wrong (even calling a narrator "unnamed" when her name was everywhere throughout the book), so my faith in these mega-reviewing websites is quickly starting to decline.

Looking around online to find info about the author, Alan Ryan, I was taken with just how many fans this guy has.  The favorite among so many people seems to be his Dead White, which Grady Hendrix at Tor's website said in a 2014 post was "about Killer Clowns on a Circus Train of Death attacking a snowbound community."  Frankly, that's enough of a description to make me never want to read that book, but it is certainly the most mentioned when someone's talking about this author.

Thankfully no clowns at all make an appearance in Cast a Cold Eye, which is set in the small village of Doolin, Ireland, about one and a half hours south of Galway on the coast. It is an area steeped in history; as is the entire country. As the author tells us:


"Here, in a land as ancient as Ireland, history was only yesterday, and the distant past breathed fresh and sharp and painful in living memory."

There are two stories at work here that will, given time and above all circumstance, ultimately converge.  The novel begins with a scene that launches the first of these, as four men are waiting in a shabeen trying to keep warm while awaiting a funeral procession before going on to an ancient graveyard to perform some strange rites. As good writers will, Ryan gives us no explanations, so the question of what's going on here and why is planted in the reader's head from the outset and stays in the back of the mind throughout the novel until all is revealed.  Great way to start a horror novel, if you ask me.  The second storyline belongs to Jack Quinlan, who has come to Ireland, home of his ancestors,  to do some research on a novel he's writing about the Famine. More specifically, his book is about


"a family and its struggles to survive through the Famine of 1846 and 1847, and about the horrible thing ... that happened to three members of his family in particular."

Jack takes a house in the rather isolated village of Doolin, planning to stay for three months, and it isn't too long before he sets up a nice routine of research, writing, and sometimes hanging out at the local pubs, where traditional music is played of an evening.  He's met a girl, Grainne, to whom he's very much attracted, and all seems to be well with him right up until the moment when he starts to see and hear some very disturbing things which seem to follow him whenever he's out and about. And then one night, while he's out, he witnesses something he knows is real, but has no explanation for.  The only person he can talk to about it is the local priest Father Henning, the local seanachie who loves telling eerie stories, yet is reluctant at best to talk with Jack about his experiences. The question becomes whether or not Jack's actually experiencing these horrific things -- is the research he's doing getting to him, or is it the remoteness and isolation of the place that's affecting him?  And if it is true that Jack is not going off his rocker but is really seeing what he thinks he's seeing, why him?

In this novel, the central imagery is blood. Blood here implies one's heritage, the Eucharistic rites, and above all, the suffering of the people caught up in the horrific Famine years.  As Thomas Gallagher in his wonderful book Paddy's Lament, Ireland 1846-1847: Prelude to Hatred tells it, perhaps the most horrific thing is that


"during the first winter of famine, 1846-47, as perhaps 400,000 Irish peasants starved, landlords exported 17 million pounds sterling worth of grain, cattle, pigs, flour, eggs, and poultry -- food that could have prevented those deaths."

And, as the back cover blurb states, as Jack continues to look for answers, he comes to discover that


"the ghosts of the past linger on into the present, and they cry out for blood..."

and this is definitely true, but perhaps not at all in the way that one would expect from a 1980s horror story.

Two more insight-type things and I'll call it a day. First, careful reading will reveal that the author was very much aware of Irish history, and little bits tend to crop up here and there that signal his sympathies. Second, I'm in awe of how the rugged Irish landscape becomes so deftly interwoven into this tale, reminding me in a remote way of the work of Le Fanu, whose work also included the landscape in his stories so that history, landscape and story all mingle together as one inseparable unit. The same is true here as well.

Reading Cast a Cold Eye is to find yourself in the middle of an eerie mystery that grows darker and creepier along the way, one that is not solved up until the last minute.  A lot of readers have noted, like the Kirkus reviewer, that the story "doesn't add up," that there are too many loose ends, yada yada yada, but it all made perfectly good sense to me.  I won't say why, since I'm sure many people will want to read this novel, but the answers really are all there. My regular habit is to finish a novel and then go back and reread the first chapter, and in this case, it's a hugely eye-opening moment, stunningly circular in nature. It may not scare the bejeebies out of modern horror readers, but for those of us who aren't looking for chainsaw-wielding killer clowns or the like, it's a delightful tale of ghostly horrors that will stay in your head for a long time after turning that last page.