The Wretch of the Sun, by Michael Cisco 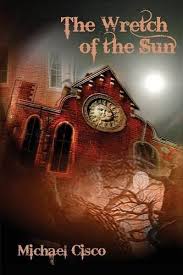 Extremely challenging, but well worth it, as are all of Michael Cisco's works that I've read, both in short story format and novels.  If you google the author, the phrase "avant-garde" comes up a lot, and that pretty much sums up his style of writing.  The Wretch of the Sun is a demanding read, which calls for active reader participation, since he's certainly not going to be handing out answers in a clearly-defined way.

Trying to explain this novel is probably as challenging as reading it, so I'm not even going to attempt it. It is and isn't a haunted house novel; it is and isn't a ghost story, and it definitely has a dystopian feel to it.   It's a book about secrets and different forms of terror, and at the center of it all stands the house known as Sanglade.  It's a place where "there are ghosts in the house," yet


"it's as if the house were a spirit itself. Artificial intelligence. Edifice intelligence. The other ghosts are like its guests or disciples."

And while a student named Trudy Bailey is trying to find out all she can about the house and the ghosts of Sanglade, little by little the reader comes to realize there are ghosts on the streets of this city as well, in the form of a secret organization working in the background against any form of dissent (i.e., the truth). This group has its own secret prisons, where horrific things happen, "all entirely legal; one way or the other everyone voted for this."  I think, though that another important component of this story is how truths are disseminated here, for example: one man sees visions of the future during his migraines, history plays a role in the revelations about the house, and there's one man who wants the story of his arrest and imprisonment to be told, but can't do so openly, so he resorts to a series of terrible puppet shows/short plays to get the word out about "el miserable del sol," doing so in a sort of code. As the narrator tells us,


"Or to be more precise, it is in as many codes as could be managed."

Sadly, the performances are so badly done that the audiences leave before the truth gets out, which adds an intensely tragic note to the whole thing.

As I said earlier, this book is very challenging, to the point of brain-frying frustration, but there is a wonderful novel underneath it all.  It really does take a while to put everything together, but by that time I was just left with my mouth hanging open because of how really good this story actually is.  There are some truly excellent moments here, for example, when Celada (the man who sees visions during his migraines) compares the haunted house, "the shrine where life triumphs over death, perfection actually manifesting itself," its ghosts, which are "frightening because they are too perfect to see without going insane or being injured somehow by intensity of adoration," and the secret organization Ukehy, which is frightening because they will torture and kill you; they are elementals of sordidness and cruelty."

There is so much more here to be experienced,  so I'll leave it there.  If you get to the end of this book and you say "WTF did I just read," well, maybe Michael Cisco isn't your cuppa. But if you get to the end of this book like I did and think "oh my god, what a creepy story, all the more creepy  because he nails it,"  then go on and read the rest of his work. I'm planning a reread of his The San Veneficio Canon sometime soon, but he has a lot more to offer as well.  Cisco is definitely not a mainstream writer relying on standard tropes or same-old same-old (which is a good thing for me),  and his writing takes a lot of work and time.  But patience is its own reward in this case.

By the way,  a very special thanks to the person known as Seregil of Rhiminee at Risingshadow who told me about this book in an online group we're in together at goodreads. You were right. I loved it.
Posted by NancyO at 10:21 AM