The Port-Wine Stain, by Norman Lock 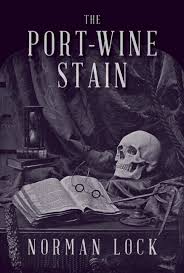 
"To see oneself mirrored by another can be unnerving."


This novel is really getting the short end of the stick from early reviewers over at LibraryThing, and I think that's just plain sad.   What I've noticed is that some of these people picked up this book expecting a Poe clone and didn't get it, thereby allowing their expectations to guide their reading experience.  I learned a long time ago that if you assume one thing and get another, well, newsflash , you're going to be disappointed -- so the trick for me has been to sit back and let the book take me where it's going to go. Someone once told me that "assume" makes an ass out of you and me, so I just let my books speak to me on their own. And this one spoke to me about just how easy it is for someone already quite impressionable to be pushed from sanity to madness.  That transition lands this book squarely into my reading wheelhouse.

The quotation from chapter one is from Poe's "William Wilson," an apt start to this novel since somewhere down the line the main character/narrator (a physician)  is going to encounter what he feels is his own doppelganger.  The story is told from his perspective to a friend, looking back from present (1876)  to thirty years in the past. He captures the attention of his friend by promising to reveal how he "came to know" Edgar Allan Poe and how Poe "initiated" him into the occult, ushering him "to the iron door of the tomb" where "he bid me knock;" the story of "the winter months I spent with him." He also reveals that for a short time, he was a "principal character in one of his horrors."

However, there's a catch: as the narrator states right up front,


"I'm a careful observer of the body's minutest motions, its fevers, crises, maladies, disturbances, but however clearly I seem to see my past, I can't be certain that what I remember of it is the truth. Memory is as liable to blight as the soul ..."

giving us our first clue that perhaps this narrator is going to be less than reliable.

Very, very briefly, young Edward Fenzil is an assistant to the renowned Dr. Mütter, who in 1844 Philadelphia is already famous for his successes in reconstructive surgery. One day Mütter receives a visitor who, as he reveals to Fenzil, is none other than Edgar Allan Poe. Fenzil has never heard of Poe, nor has he ever read any of his work. A week later, Poe returns, "fascinated" by Mütter's collection -- his specimens -- and Mütter gives Edward the task of showing Poe around and giving him "every assistance." The relationship between Fenzil and Poe intensifies as time goes on, as they spend long nights together and as Poe begins to bring young Fenzil into his rather bizarre world. But things take a very weird turn when Poe and his friends from the Thanatopsis Club decide to "initiate" Edward into the group, starting a sequence of events that lead to a most horrific tragedy and an unexpected ending that blew me away.

Here's the thing:  as I said, if you're expecting a Poe-centric story or Poe clone here, you're going to be disappointed. Yes, he's in the book, and yes, the author does take you into his sad, dark world, where he finds a "strange beauty in suffering."  But here the narrative firmly belongs to Fenzil, not Poe, so Edward is most definitely the one to watch.   Another thing: many readers have complained about the style and the prose of this novel, but anyone who reads widely in 19th-century literature will have no problems with it. I suppose that many of the negatives may come from people who do the so-called "fifty-page rule," and who didn't find it punchy or exciting enough within that space to continue reading or at least to give the book more of a chance.  It's not that I think the book is great, because I don't (like a 3.5 on a 5-star scale)  but it is very dark and examines how the sanity of a seemingly-normal yet impressionable person can be so easily tipped over the edge, making it a book that is right up my alley.

My thanks to LibraryThing and to Bellevue Literary Press for my copy.