catching up again ... The Stones of Muncaster Cathedral, by Robert Westall 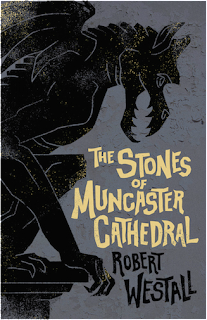 
"...I think that if there is a God, he must have lost interest and pushed off to mend some different universe."

I buy and read so many Valancourt novels that if I was someone else reading this part of my reading journal, I'd be wondering if perhaps I'm pimping this publisher, or at best, serving as  spokesperson for these guys.   Not so, she says. Frankly, their work speaks to me in a way that appeals. While I try to keep my feet in both worlds, modern and old, they have this knack of putting out books from the past that I can't resist. Well, there's that and the fact that  most of my favorite books over the last few years have come from small, indie publishers that most people seem to eschew in favor of the bigger houses without knowing what they're missing.

I actually read this back in December during a stormy day, wrapped up in a blanket with a cup of hot, spicy chai in hand -- it was, as I mentioned somewhere, a perfectly ahhhh sort of Saturday experience.  There are two eerie tales in one volume here: the title story, "The Stones of Muncaster Cathedral," and a story that has never before seen  the light of day in the US, "Brangwyn Gardens." My personal favorite is the latter, but both are quite good, and I have absolutely no qualms in recommending this little book.

Sadly, to tell is to ruin so I'm not going to be giving away much in the way of plot, most especially for "Brangwyn Gardens."  In "The Stones of Muncaster Cathedral," we have a first-person narrative going on via a steeplejack named Joe Clarke, whose company has been offered a job fixing the southwest tower of the titular cathedral.  It's not the sort of job Joe's company is regularly asked to do -- as he notes, "Cathedrals were for the big boys," --  but the company that is usually commissioned seems to be busy elsewhere for the entire summer; the other company is not available because one of their men has a back injury.  The first clue we have that something just ain't right here is Joe's remark about "lying sods," and about the "big boys" knowing something he didn't. Alarm bells started ringing in my head about then (and that's just on page two), so I knew this was going to be good. How right I was -- the rest of this story begins once Joe is high up on the Cathedral's tower, as he senses some creepiness emanating from of all things, one of the gargoyles found there.   Joe, though, is the consummate professional, extremely proud of his work and the family tradition of steeplejacking, so he sort of shakes it off until one night when his young son goes sleepwalking and is found at the tower...

That's all I'll reveal about the story now, except for the fact that once Joe goes delving into the tower's history, he discovers something horrific from its past that has made its way into the present.

While normally this sort of thing isn't my typical reading material, I loved this story, which proceeded to put knots in my stomach the more I got into it.

"Brangwyn Gardens" is set in 1955 London, beginning when a young student (Harry Shaftoe) with a sort of cavalier attitude about life takes a room in an attic in a house in Brangwyn Gardens.  This tale is a story about obsession that grows from his discovery of a wartime diary kept by a young woman, Catherine Winslow.  As he reads through the diary, he comes to realize that this girl had a secret longing for a "dark and dangerous man" whom she eventually finds. As he is drawn more deeply into her story, he begins to notice signs that perhaps the past lives on at number eleven Brangwyn Gardens, and his obsession begins to take hold, drawing him back in time... 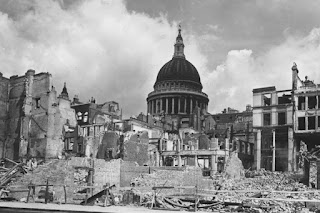 This story is much more in my reading line -- a very poignant and downright haunting story that for some reason made me think of Virginia Woolf's "A Haunted House" even though the two are very, very  different. I can't say why exactly this tale made me go there in my head, but it did. I absolutely loved "Brangwyn Gardens." In reading over reader reactions to this story, I discovered that many people felt a bit let down at its ending, but not me --  a) I love stories like this one where the past tends to collide with the present and b) without sounding mushy here, it was a sad story that touched me on a very human, emotional level. I won't say more, because it is something a person must experience, but I will say that I thought about "Brangwyn Gardens" for days after I'd finished it.

I'd never read Westall before because I thought he wrote mainly for children, but there is nothing at all childish about either of these two stories, which although vastly different from each other, are connected with their focus on the past and how it lingers on into the present.  Recommended, although perhaps more for people like me who seem to appreciate old-school sort of horror and supernatural stories.
Posted by NancyO at 8:33 AM