The Beetle, by Richard Marsh

It seems that no matter where I turn to find a literary review of this novel, everyone wants to compare it to Bram Stoker's Dracula.  The two books were published in the same year, both stories are related through the use of journal entries from the principal players, both imagine an evil force coming into England from outside for its own wicked and abominable purposes, and in both books, the vile alien threat has to be neutralized to keep England from peril. Yet,  while I see that between the two, in terms of "literary" value, most people prefer Stoker's book, to me Dracula wasn't nearly as entertaining.  The Beetle is a lovely, unputdownable mix of supernatural horror, revenge tale, creepy gothic fiction and mystery all rolled into one, and it's just plain fun.

There are four narrators in this novel; the first is Robert Holt whose bizarre story throws us right into the midst of the strange.  Entering a deserted house to escape the rain after having been denied lodging at the modern equivalent of a homeless shelter, he is set upon by a "creature" that reminds him of a spider (the "Beetle" of the title).   As he tries to make his escape back out the window, suddenly a light comes on in the house and Holt finds himself face to face with a deformed man whose eyes were his most "marked" feature.  As Holt notes,


"Escape them I could not, while, as I endeavored to meet them, it was as if I shrivelled into nothingness.  They held me enchained, helpless, spell-bound. I felt that the could do with me as they would; and they did."

Holt discovers that he has no choice but to do what he is commanded by this horrific figure and he is ordered to break into the home of Paul Lessingham,  member of Parliament.  While carrying out his task, he is confronted by Lessingham who is stopped in his tracks when Holt screams out "THE BEETLE!"  Holt's narrative sets the tone for the remainder of the story, which is revealed in turns from the points of view of Sydney Atherton, an inventor of weapons who just happens to be in love with Lessingham's love Marjorie Lindon, Miss Lindon herself, and the Honorable Augustus Champnell, Confidential Agent.  It is during this last section that we discover exactly why this threat has appeared in England and why it is targeting Lessingham (and through him, Miss Lindon) specifically.

Barebones outline, for sure, but there's a LOT churning around in this novel.  Under its surface, though, as Minna Vuohelainen explains in the introduction, Marsh also explores "constant, traumautic shifting of class, social, gendered, sexual, ethnic and national identities."  How all of these thematic elements are manifested becomes pretty self evident without having to seek them out, especially in terms of sexuality.  I would imagine that this was a pretty daring tale back in 1897 -- for one thing, we don't even leave the first section before Holt in his hypnotized state is set upon sexually by the Beetle in masculine form, although this creature can also manifest itself as a woman.   For another, Lessingham's account given to Champnell refers to a strange cult that kidnaps English victims, both male and female, holding them for prolonged periods to be used in strange rituals involving torture and sexual depravity.  I suppose one could also read the novel as a story that plays on the fear of invasion by foreign elements or fear of those outsiders already living among the English, obviously with sinister intentions toward  England's men and women. 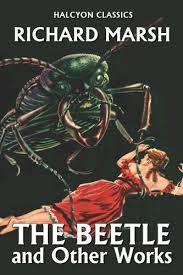 The Beetle may not be the greatest in terms of literary value, but I will say that it is a hell of a lot of fun to read. To me it is the literary equivalent of comfort food, and its Egyptian flavor along with all of its over-the-top moments remind me a lot of the old pulpy horror/gothic books I devoured as a nerdy kid on rainy days.

Recommended, without any hesitation whatsoever.  Even if it's a little silly sometimes, it is truly a delight. Once again, my thanks to Valancourt Books for publishing some of the finest old books ever.