"I've taken this old bag into some damned odd places, but I have a feeling this is going to be about the oddest."


When I picked up Benighted, by J.B. Priestley, I had absolutely no idea what I was about to read. As it turns out, it is one of the most claustrophobic novels I've ever read.  In a good way, of course. 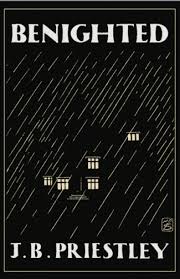 The back cover blurb says it's a "classic 'old dark house' novel of psychological terror." And indeed, director James Whale in 1932 would adapt Priestley's story and create a movie called "The Old Dark House," which I watched directly after reading this novel. Whale is good at  creepiness and atmosphere, but he also plays parts of his adaptation for laughs, so the movie becomes a very mixed bag, sadly without the whole existential feel created by Priestley. Truth be told, the book is SO much better than the film.

Indeed, the first several pages into the book,  I was ecstatic to find all of the trappings of the 'old dark house' story: a horrific storm complete with blinding, torrential rain, flooded roads, mudslides and a completely impassable road that brings three people to the literal old dark house. This one happens to be in the Welsh countryside, a perfect setting, a house with some rather strange inhabitants. This wave of ahhhh just settled right over me.

The Wavertons, Margaret and Philip,  along with their friend Penderel, find themselves stuck in their car during this storm on their way to Shrewsbury, and conditions are so bad that they are forced to seek shelter. As Penderel says, they're

When the door is answered in response to his knock, "A huge lump of a man stood there...a shapeless man with a full black beard and matted over a low forehead,"  the travelers' introduction to Morgan, the manservant. On entering the house the three are met by Horace Femm and his sister Rebecca; their elder brother, Sir Roderick Femm, is "confined to his bed,...very old, very weak..."  They are welcome to stay, according to Horace, but Rebecca literally screeches at them that "They can't have beds."  They're not at chez Femm very long before another set of stranded travelers is "benighted;" enter Sir William Porterhouse and his companion, Miss Gladys Du Cane. 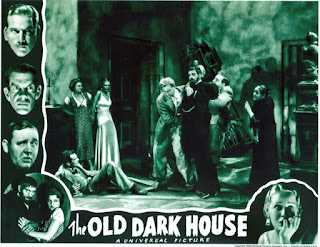 The story then changes from what I was expecting and takes much more of an existential turn once all of the travelers are in the house.  Since they're all there for the night at least, they start a game of Truth, which turns their time together into some deep philosophizing as they reveal secrets and stories about their pasts and what they hope for their futures.  There's only one rule to the game, and as Philip notes,


"the very existence of this pastime, with its one rule about answering truthfully, is an awful comment on society."

Indeed, this entire book could be looked at as a comment on society, especially during the postwar period where things are changing very quickly,  and it examines in part, as noted in the introduction, the people who "are clinging to their manners against an uncaring and chaotic universe."

There are some moments of mild terror and creepiness that come into this novel, but if you're expecting Whale's  "The Old Dark House," forget about it.  Much of Benighted had a sort of semi-Gothic, rather than horror-ish feel to it, and it seems to me that if you take the story as a whole, it works very nicely on an allegorical level.  The house, with its locked doors, its secrets,  its creepiness and its strange inhabitants provides a great setting for understanding how some people work up the resolve to confront their fears, while others choose to stay locked away from the rest of the world.

As the introduction to this novel notes, there is a sense of "existential dread" that permeates this entire story. I'll leave it to the reader to discover exactly what this means, but it's not a book that allows you to rest easy while you're reading it. I got so caught up in these lives that I could not put the book down until I saw how everything turned out.  Let me just say that this book has a shocker of an ending, one I never saw coming and one that hit me like a sledgehammer. It's also so dark that when day finally dawned, like the 'benighted' travelers,  I was so very happy to get out of that house and back into the sunlight again.