The Master of the Macabre, by Russell Thorndike

It's impossible to pigeonhole this book into a particular category, so I'm not even going to try, square pegs and round holes and all that.  There's a lot going on in this little book -- it's a different take on the usual haunted house story, it's a ghost story, it's pulpy, and there are a number of spots where it's also funny.  While it's not particularly frightening (or at least it wasn't to me), The Master of the Macabre is still a little gem of a book and makes for fine pre-Halloween (or any time for that matter) reading.

Set in 1940s England, author Tayler Kent has been under a bit of stress over a four-week period,  perhaps due to the "mental strain" of working on finishing a "complicated biography" he's been working on, but he doesn't think so. He's been having strange dreams of shadowy figures with vivid eyes -- a pleading woman and a "commanding and servile" man, "compelling" him to "obey them."  Rather than seek medical help, he decides to take a trip to his cottage on Romney Marsh, where he hopes to find some much needed peace and quiet.  He makes a brief stop at his club, where he is handed a package left for him by his friend Carnaby.  Kent is to deliver the package to the Old Palace of Wrotham, the residence of "The Master of the Macabre." There is no other name given, and Kent shrugs it off as a joke, wondering what Carnaby's up to this time. As he's heading out, the weather is terrible and turns into a terrible snowstorm; on the road, where can barely see and loses control of both brakes and steering, he skids and is enveloped by a "gigantic snow-slide."  While trying to escape being buried in the snow, he injures his leg. Despite the pain, he makes his way to a "fine old place."  It seems that Kent is expected  -- and preparations have already been made for his stay there.  The elderly gentleman who greets him is Hoadley, general factotum to the home's owner, Charles Hogarth, who is also known as (you guessed it) "The Master of the Macabre."  Things start taking a strange turn the very first night of Kent's stay, and while he's laid up, Hogarth shows him a collection of strange relics that he's collected over the years, each with some sort of bizarre story attached to it, and shares his belief that  "every so-called inanimate object in this world...has a being" of its own, which also extends to the house and the objects found within. This theme recurs throughout the book, and is especially highlighted when Hogarth realizes that someone else has laid a claim for one of his valued possessions.   Hogarth is a collector of "the material of odd happenings," --  both his own and others --  and has spent time setting them down into manuscripts "for the few."  These stories, the mystery of the house itself, and the secret behind Kent's sleepless nights slowly unfold as the book progresses. 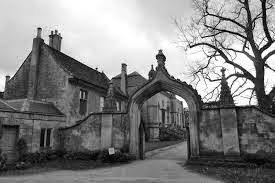 As Hoadley so eloquently reveals, "this house is very susceptible... to susceptible minds."  It also has "influences," and no one who comes to work there will ever stay there after dark.  Hogarth also reveals that the house is "alive," that it's "just like a human being with moods" that need to be humored; it's a house with a mind that needs to be understood.  The house also has  "powerful and insidious" properties, with some rooms much more alive than others, and are more often than not, places where history repeats itself again and again.   However, this book goes well beyond the standard haunted house story filled with ghosts or other terrors.  Hogarth himself is a strange figure, a sort of detective who ferrets out the strange, and as Mark Valentine notes in his introduction (which should definitely be saved until after you've read the last page), his creator finds himself in "good company" among other authors who have written books with a "major plot and conspiracy, augmented by piquant minor side-adventures," none the least of whom are Arthur Machen and Robert Louis Stevenson.  The introduction itself is enlightening, with a very brief history of the rise of the "investigator of the uncanny" and the occult detective.

While the language may be a little overbearing for a modern reader, I had no problem with it, but then again, I love classic tales and have also spent many an hour with my nose buried in the work of golden-age writers of detective fiction who also tend toward the sort of verbosity found here in places.  Some of the stories are delightfully pulpy, while some are just, well, there's no better word than "macabre" to describe them. There were times I couldn't help but chuckle (the story entitled "Concerning a Mad Sexton, A Drunk Hangman and a Pretty Girl" actually brought out a belly laugh) even as dark deeds were being done. Also, don't let the "investigator of the uncanny" thing  turn you away from this little book -- while it may not provide readers with in-your-face horror that many modern readers crave, it's still a fun little book that needs to be looked at  in its entirety rather than just in story-by-story mode.  It's definitely a book to be appreciated, and I give kudos to Valancourt Books for bringing it into the present.
Posted by NancyO at 9:35 AM