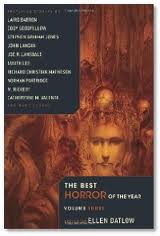 On the back-cover blurb it says the following:

"What causes that delicious shiver of fear to travel the length of our spines?...Every year the bar is raised; the screw is tightened.  Ellen Datlow knows what scares us..."

Well, evidently she doesn't know what scares me because once again (after having read the first two volumes in this series), I'm left wondering about that "delicious shiver of fear," which, with a few exceptions, just didn't materialize over the course of this book.  Still, I keep hoping, meaning I've got Volume Four on my nightstand, ready to go, and I've already pre-ordered Volume Five, which according to Amazon, is expected to be out in June of this year.  I think that what keeps me coming back is that when I find a story that actually sends that chill down my spine, I want to find more work by the author who actually managed to pleasantly provide me with a few downright creepy moments . That reasoning has not only led me to some particularly good writers, but also has started to fill out my horror collection, a definite plus for sleepless nights.   So, for anyone who may be wondering why I continue to buy these books when I haven't yet been totally satisfied, you now have an answer.  That's how I discovered Laird Barron -- who is probably my favorite horror writer -- by picking up different horror anthologies here and there.

Let me start out by saying that my expressed hope for the forward movement of improvement (referring to the big difference between volumes one and two of this series) was a bit dashed in this installment, but there are a handful of stories that I actually like. The usual inclusion of the editor's summation of books, stories, etc. from 2010 is also much appreciated, with some books once again making my wishlist and some actually finding their way to my house.   Volume Three has 21 stories (* indicates the ones I really enjoyed):

1. At the Riding School by Cody Goodfellow
2. Mr. Pigsny by Reggie Oliver
3. City of the Dog by John Langan
4. *Just Outside Our Windows, Deep Inside Our Walls by Brian Hodge
5. *Lesser Demons by Norman Partridge
6. When the Zombies Win by Karina Sumner-Smith
7. *-30-by Laird Barron
8. Fallen Boys by Mark Morris
9. Was She Wicked? Was She Good? by M. Rickert
10. The Fear by Richard Harland
11. Till the Morning Comes by Stephen Graham Jones
12. Shomer by Glen Hirshberg
13. Oh I Do Like to Be Beside the Seaside by Christopher Fowler
14. The Obscure Bird by Nicholas Royle
15. Transfiguration by Richard Christian Matheson
16. The Days of Flaming Motorcycles by Catherynne M. Valente
17. The Folding Man Joe R. Lansdale
18. Just Another Desert Night With Blood by Joseph S. Pulver, Sr.
19. *Black and White Sky by Tanith Lee
20. At Night When the Demons Come by Ray Cluley
21. The Revel by John Langan


Tallying the number of stars produces four stories I'd recommend. In Volume One I found three, Volume Two indicated a marked improvement with five, and now we've gone down a notch to four. 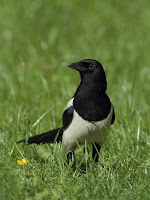 Laird Barron's  "--30'--"  is one  I've read before in his excellent collection Occultation.  I love the opening words in this little gem: "You know how this is going to end."  It is an excellent story of two scientists isolated in the desert of Washington state,  and true to form, Barron builds the layers of terror ever so slowly.  Another reread is Norman Partridge's "Lesser Demons,"  a near-perfect blend of hardboiled hero & downright horror. I didn't realize until now that he has a book by the same name ... on the wishlist it goes.  Of the two new to me, the best read was "Black and White Sky" by Tanith Lee,  one of the most bizarre tales I've read in quite a while.  Quiet life in the British Isles is shaken by upward-moving magpies, a strange phenomenon that leads to a terrifying and atmospherically-creepy conclusion. This one is really good, definitely not to be missed. I read this one twice and both times it produced that lovely spine tingle I look for. "Just Outside Our Windows, Deep Inside Our Walls," by Brian Hodge is also a winner -- a boy meets a new neighbor next door, and a friendship begins, but it may only bring trouble since the boy has been locked up for the safety of others. There's definitely  a good reason behind it all, which will come as a bit of a shock.
I'd also like to point out Cody Goodfellow's story "At the Riding School," a bit on the violent side for my tastes but very well written; "The Fear,"  by Richard Harland was another one that  had me going up until the end when it frustratingly petered out.

I may be pickier than most readers in terms of horror reading, but the thing is, I am really looking for stories that send that "delicious shiver of fear" down my spine and so far in this series, there have only been a few meeting this description.  That's kind of a shame, but I can only  hope for better in the next volume.