The Imago Sequence and Other Stories, by Laird Barron

"We are born, we absorb, we are absorbed. Therein lies the function of all sentient beings."

This is actually a reread for me; I first read this in 2007 when it was published, but I recently felt the need for reading horror and really couldn't remember much about this one, so I pulled it off my shelf.  After finishing it this time, it came to me that I must not have really put any effort into it during my first go, because frankly, these stories are absolutely unforgettable.  The reader is taken off guard, thrown into that sense of unease from the first page, and with only minor respites between stories, is for the most part kept off kilter until the last sentence of the book.  The Imago Sequence more than exceeded my expectations in terms of the fear quotient -- that feeling I get when I read something that keeps a) the hairs on the back of my neck bristling, b) my stomach in knots, and c) the feeling of looming dread alive and well throughout.  Add in a writing style where horror meets literature, and well, they just don't get much better than this, folks.  Seriously.

Contained in The Imago Sequence are nine stories, three of which (*) are so well written and so incredibly creepy that I'm still thinking about them two days later.

1. "Old Virginia," the tale of a  CIA agent  assigned to a detail in the wilds of West Virginia, kept in the dark about an MK-ULTRA project until it's too late;
2. "Shiva, Open Your Eye," a short but powerful entry in this collection. A presence whose sole task lies well beyond human comprehension takes on human form, leaving bodies in its wake.  Read this one carefully -- it sets the stage for most of the stories that follow.
3.*  "Procession of the Black Sloth," which is one my favorites  in this book, is so unsettling that I had to read it twice.  Set in Hong Kong, with a variety of creepy characters, a man is sent to uncover who is at the root of corporate espionage, and ends up uncovering his true destiny.  Much of  "Procession of the Black Sloth" is viewed via scenes aired on televisions, in photos or other media, and it  reminded me of a lot of the Japanese and Korean horror flicks I watch when my husband's away that keep me up all night afterwards listening to the creaks in the house.  This one had much the same effect -- I had to set the book aside for a day before I could continue. 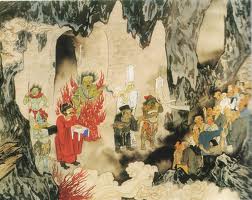 4."Bulldozer," a story set in the wild west where a gun-wielding, tough-guy Pinkerton operative has been sent on a mission by PT Barnum to recover a stolen Necronomicon-type tome and runs into serial murders that  are part of a  hideous ritual.  I really didn't appreciate this one until reading later stories in this book, but it was good and frightening all the same.
5. "Proboscis," in which an actor who's seen better days tags along with some bounty hunters on a mission to snag a serial killer and realizes that there are devourers among us...
6.* "Hallucigenia."  This is another one of the entries in this novel that provides an off-the-charts goosebump-producing experience as you read.  A wealthy man who's been around  and his beautiful, young  wife are out on a drive when their car suddenly breaks down; while it's being fixed the wife decides to go shoot some photos and comes across an old barn. He follows and out of nowhere his wife is seriously injured, left with a strange crack in her head that refuses to heal. As he's trying to make sense of what's happened at that barn, he spares no expense in tracking down anyone connected with the place.  That day, in more than one way, was a life-changer; "Hallucigenia" provides several OMG moments of sheer delightful fright.
7.  "Parallax," which runs more along the lines of science fiction than the others, where a man whose wife suddenly and out of nowhere goes missing tells the story of the aftermath of her disappearance; the payoff comes at the very end of this story and will leave you stymied.  I liked this one -- and like many of the other stories, it demanded an instant reread.
8. "The Royal Zoo is Closed," is probably my least favorite story in the collection; that doesn't mean it's bad but I just felt that the others were far, far better.
9. * "The Imago Sequence," another of my favorites and probably the creepiest of them all, has as its main character a noir-type protagonist who is hired to find out what happened to someone who went missing, and to find two of a set of three photographs that taken together are known as the Imago Sequence.  The first one strikes some inner chord that  is disturbing enough to the protagonist that he has to see the others, especially the last one.   Truly one of the major highlights of this book, this story held me in its grip and didn't let up for a second -- and I'm still thinking about it.

There are a number of things that I loved about this book.  First, an interesting aspect about all these stories as a whole is that they point thematically in several of the same directions: a) there are the tough-guy characters who in their own realities can more take care of themselves in particularly knotty and extreme situations yet who eventually become putty in the hands of cosmic  forces well beyond their control and their comprehension; b) said forces are often described by Barron as mouths with appetites and he uses holes and cracks as symbols and metaphors that transverse all of these stories; c) the idea that our human need to know is often responsible for our own downfall resonates clearly -- as one character in "Bulldozer" notes, "Ignorance is all the blessing we apes can hope for," but the way Barron develops his characters here leaves little room for passive acceptance among them -- these people want to try to get a grip on understanding what's happening.  Finally,  d) there's a cyclical feel to a number of these stories, as well as the sense that some of them are connected across time and space.  Another reason that this book is such a winner is that Barron doesn't have to lay out scenes of explicit, slasher-film type gore to make his stories work -- he is one of the most gifted horror writers I've read. He is incredibly  talented in using prose that  takes readers to the edge of the worst that can happen and leaving them dangling  to experience the fear, panic and ultimately the hopelessness that abides there. He can create a most palpable sense of doom and dread without having to resort to cheapness, which sadly I've found exists in a lot of horror writing and which is why I rarely read much of it any more.

There are a number of very eloquent reviews of this book on line; for my part, all I can say is that I am in awe of Barron's talent as a writer.  The outright uneasiness and the sense of being off-kilter I felt throughout this novel speaks to how deeply I was drawn into the worlds he's created.   I had to go back to read several stories a second time to make sure that what I'd just read was indeed the case, a number of these stories gave me an unstoppable case of the willies to the point where I had to put the book down and walk away for a while, and the fact that I'm still thinking of a couple of them two days after finishing is the icing on the cake of how very well written and downright creepy this book is.   The Imago Sequence is definitely a no-miss in the odd world of weird fiction.
Posted by NancyO at 12:57 PM 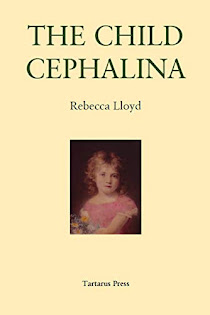